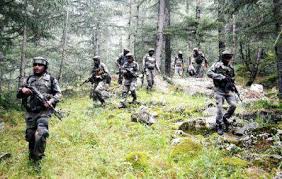 There are dark clouds hovering over the state of Jammu and Kashmir, reports of a perceptible increase in infiltration and the audacious attack at Kathua and Samba have considerably raised the security threshold of the State. The Indian Army continues to be engaged in a grim battle against 35-40 terrorists attempting infiltration and ingress into Indian territory in the Karen sector of Kupwara. Unconfirmed reports suggest that regular troops of Pakistan Army are involved in the Karen operation. More and more fingers are being pointed at Nawaz Sharif for having failed to rein in the fundamentalist forces operating from the soil of his country. He also does not seem to be having any control over his army Generals. Public sentiment in India is making any forward movement in building a relationship with Pakistan increasingly difficult.

Under these trying circumstances Prime Minister Manmohan Singh took a decision to meet with the Pakistani Prime Minister on the sidelines of the United States General Assembly session in New York. He did not change his agenda even after the Samba attack and the Karen misadventure that took place while he was on his way to New York. This decision of Prime Minister Manmohan Singh may well be one of the most crucial that he has ever taken so far as his policy of engagement with Pakistan is concerned.

There are many who believe that the decision is more due to US pressure to assist its smooth draw back from Afghanistan rather than any move towards resolution of bilateral issues. This could probably be the reason why both leaders did not hold a joint press conference or even issue a joint press note after the talks. There was nothing to say so far as the bilateral issues are concerned. This apart, there is the question of the probity of any discussion between this set of leaders, both being low in credibility in their respective Nations and in the eyes of the world at this point in time.

Be that as it may, Prime Minister Manmohan Singh did set an aggressive pace for the meeting by using some strong words during his meeting with President Obama and in his address to the United Nations General Assembly so far as Pakistan is concerned. While terming the neighbouring country as an ‘epicenter of terror’ he called upon its leadership to shut down the ‘terror machinery’ operating from its soil. “State sponsored cross border terrorism is of particular concern to India on account of the fact that the epicenter of terrorism in our region is located in our neighbourhood in Pakistan,” said the Prime Minister while demonstrating an unusually tough posture.

Nawaz Sharif, for all his sweet talk and eagerness to proceed with talks at the highest level, did not desist from following a time tested posture. His reference to Jammu and Kashmir in his speech to the United Nations General Assembly was no different from that of any of his predecessors. He referred to the alleged human rights violations in Kashmir and said that “Suffering of the people cannot be brushed under the carpet because of power politics.” He also reiterated that the “issue of Jammu and Kashmir was presented to the Security Council in January 1948 and yet remains unresolved after nearly seven decades.” Surely, Nawaz Sharif understands that the two Nations have, since long, agreed to resolve all issues bilaterally and under provisions of the Shimla Agreement, so why these double faced politics?

Against this backdrop, the meeting between the two leaders, already prophesised to be a damp squib, certainly lived up to the prediction. It is said that the two leaders avoided eye contact and were quite uncomfortable. The resultant statements by the external affairs establishments of the two countries were full of diplomatic rhetoric but low on content. Since ceasefire violation formed a major part of the discussion the two leaders decided to task the Director Generals of Military Operations of the two armies to suggest effective methods to restore the ceasefire. The only positive derivative is that the two countries have acknowledged that ceasefire is under strain and something needs to be done to restore the deteriorating situation. So far as the imprint of terror is concerned, Nawaz Sharif had no words to assuage the concerns expressed by Prime Minister Manmohan Singh about continued support to the acclaimed international terrorist Hafeez Saeed and his organization the JuD.

All said and done the matter is back to square one. Possibly, holding of this meeting was not a good idea; now, what is done is done, Nawaz Sharif should be happy that the Indian Prime Minister kept his word and did not cause any embarrassment to him at a stage when he is trying to take stock of things in his own country.

The best way forward is to gear up to meet the violent challenges that Pakistan is hell bent on imposing upon the Nation. The most critical aspect at the moment is to restore sanctity of the line of control. Continued ceasefire violations have the potential of escalating tension to an unmanageable degree; these can be contained only if Pakistan gives up on its policy of infiltration which is a tall order. India, therefore, will need to tone down the political engagement and concentrate on military operations that make infiltration a costly and difficult proposition. This being a matter of national security no outside influence should be allowed to bear upon the country. In this the Indian Army would require unstinted support of the Government of India and the Government of Jammu and Kashmir. Diplomatic efforts can, of course, go along simultaneously. A hard hitting psychological campaign that reaches out the recruitment base of the terrorists with a message that infiltration into India means certain death would pay handsome dividends.