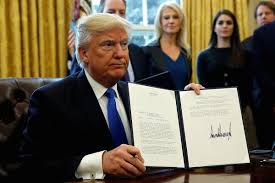 Pakistan is going through a phase of severe insecurity. The accession of Donald Trump as president of the United States did not go down well for the country, despite the hoopla created about his first call to Prime Minister Nawaz Sharif as President designate.

Pakistan would have heaved a sigh of relief at being excluded from the list of Islamic countries from where Trump has, through an executive order, suspended the arrival of refugees for at least 120 days and barred visas for travellers for the next three months.

Pakistan knows quite well that it is not too far behind in the pecking order for a similar ban. In fact, a top white House official has already given a hint of Pakistan being under consideration of being included in the list of countries from where immigration has been banned.

“Now, you can point to other countries that have similar problems, like Pakistan and others. Perhaps we need to take it further…..,” said White House Chief of Staff Reince Priebus to CBS News.

With the intention of containing a panic reaction within Pakistan, legal road blocks to the ban are being conscientiously documented by the Pakistani press.

“Trump immigration ban loses first legal battle,” says the headline of the major article in Pakistani newspaper Express Tribune on January 29. Similar pieces have been written by other newspapers also while the Television channels are going overboard with debates on the subject; mainly castigating President Trump for his action.

While dwelling on the possibility of a situation where Pakistan would be finally put in its place, it is necessary to factor in the capacity of the country to turn the diplomatic tables.

On many previous occasions Pakistan has bounced back as a strategic imperative for America when the world had written off the relationship between the two countries.

The last such time came by in the aftermath of the 9/11 terrorist attack in the US which was deftly leveraged by the then president of Pakistan, Pervez Musharraf,  to keep the country afloat for a decade and a half with American support.

The arsenal that Pakistan got for free due to this unholy alliance was enough for the country to maintain military parity with India. This, in turn, motivated continuance of the proxy war, especially so, in the Kashmir Valley.

Pakistan has already put in place a process to create a good impression on President Donald Trump by taking some punitive action to prove to the US administration that it is all set to follow a reformative path. The house arrest of internationally wanted terrorist Hafiz Saeed is a significant step in this direction.

Pakistan is also working overtime to portray the incumbent government in Delhi as one of Hindu right-wing extremist parties who are skilfully exploiting the anti-colonial, anti-imperial narrative to mask their xenophobia and anti-West agenda. This is a crude attempts is to send to President Donald Trump a message that Prime Minister Narendra Modi and his government in India are not trust worthy enough to deal with.

It is important for India to counter the machinations of Pakistan with a strong diplomatic campaign supported by the media. India needs to highlight the radicalised and fundamentalist nature of the country and its position as the epicentre and incubator of Islamic terror.

It is also very important to highlight the internal contradictions of Pakistan that are causing a huge humanitarian problem in almost all of its provinces except Punjab.

The fact that the unrest in Pakistan can have a terrible cascading effect on India also needs to be impressed upon the international community, particularly America, very strongly.

The first telephonic conversation between President Donald Trump and Prime Minister Narendra Modi has given a positive framework to India’s relationship with the Trump led presidency.

In its official statement post the conversation, the White House said that Trump and Modi “discussed opportunities to strengthen the partnership between the United States and India in broad areas such as the economy and defense.”

The buzz doing the rounds is that the thrust was on defense, which translates into President Trump continuing with the policy of looking towards India to counter China’s growing dominance in Asia.

The good vibrations between India and the US have the potential of putting the shaky Indo-Russia relationship back on track considering that President Trump is warming up to his Russian counterpart President Vladimir Putin very fast indeed.

The scenario of closer ties between Russia, United States and India in aspects of regional peace and stability especially so in the context of Afghanistan would be causing nightmares to the Pakistani establishment.  Should such a coalition of ideas come by (which is very much possible) Pakistan will be left with none other than China to look towards for support.

The big issue that would thereby arise is the manner in which Pakistan will play up to the insecurities that China would feel if such a relationship between India, US and Russia gains momentum.  Hence the need to keenly watch the posture that China adopts in the upcoming “Great Game.” China should not be allowed to feel insecure due to the growing closeness between the three countries.

It is very important for India to play a positive and dynamic role in the realignment of the great global powers in the context of South Asia. One small mistake at this sensitive juncture can have devastating implications. The diplomatic exercise, therefore, is a national imperative for which all political parties, intelligentsia and media have to work together. It would be beneficial for India to approach the diplomatic process from the platform of a “national consensus.” The need of the hour is optimum use of the traditional tools of diplomacy and instruments of statecraft in a manner that the complexity of the emerging situation is both understood and exploited to advantage.

(Mehtab Karan Singh is a US based Engineer and columnist)