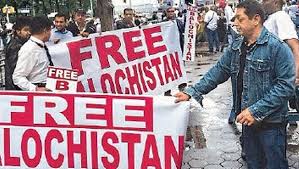 “Today from the ramparts of Red Fort, I want to greet and express my thanks to some people. In the last few days, people of Balochistan, Gilgit, Pakistan Occupied Kashmir have thanked me, have expressed gratitude, and expressed good wishes for me.”

Prime Minister Narendra Modi, with this statement in his address to the Nation on the 70th Independence Day of the country, heralded a paradigm shift In India’s policy towards humanitarian issues and political fault lines prevalent in the Indian subcontinent.

The remark by the prime minister was made in the context of his earlier statement on 12 August, during an all party meet on the issue of Jammu and Kashmir. “Pakistan forgets that it bombs its own citizens using fighter planes. The time has come when Pakistan shall have to answer to the world for the atrocities committed by it against people in Balochistan and Pakistan Occupied Kashmir (POK),” he said.

The posture taken by the NDA government and articulated by none less than the prime minister himself has elicited some extreme reactions, as was expected.

The people of Balochistan have reacted with joy since they now see a ray of hope emanating from India. Baloch activists living in exile in various parts of the world have expressed happiness.

“Har Har Modi, Ghar Ghar Modi” was the immediate ecstatic response of a well known Baloch activist Ahmar Mustikhan. Nawab Brahumdagh Bugti, the exiled grandson of the great Baloch freedom fighter, Nawab Akbar Bugti, who was killed by the Musharraf regime in August, 2006 , said that he was “indebted” to Prime Minister Modi for openly condemning Pakistan for atrocities in Balochistan. Prominent leaders who welcomed the statement made by Modi include London-based Hyrbyair Marri and Toronto-based Karima Baloch among many others.

Pakistan, on the other hand, went into a state of frenzy! While the government of Pakistan insisted that the situation in Balochistan and Kashmir cannot be equated, the media of the country termed the statements as aggressive and a “breach of diplomatic norms.” Certain opposition parties in India, especially the Congress, also criticised the posture.

Is the stand taken by Indian with regard to Balochistan righteous and justified?

For seven and a half months after partition of the subcontinent in 1947, Kalat-Balochistan remained a free and independent country. On March, 27, 1948 Pakistan invaded and occupied Kalat. The aging Khan of Kalat, Mir Ahmadyar Khan, approached India for protection but the same was not provided by the Jawahar Lal Nehru led government. Thus, Balochistan was forcibly inducted into the state of Pakistan.

Ever since, the province has been struggling for its rights; in the absence of a positive response from the government, this struggle has taken the form of an open rebellion and a demand for independence.

Baluchistan shares its border with Iran’s restive Sistan and Baluchestan Province which also has a Baloch majority and has been in the throes of an insurgency for many decades. The demand of a Baloch nation, thus, brings together all the Baloch majority areas of Pakistan, Afghanistan and Iran.

Balochistan is also ethnically the most diverse province of Pakistan. It is home to Baloch, Hazaras, Sikhs, Hindus, Parsees and an array of Sunni adherents. The importance of this ethnic diversity also lies in the spread of the communities across the border towards Afghanistan and Iran.

The aforementioned aspects make the demand for independence a multinational issue.

The Baloch took arms against Islamabad in 1971 after the debacle in East Pakistan which led to the creation of Bangladesh. The uprising was crushed brutally and hundreds of thousands of Afghan refugees were permitted to settle over there with the intention of changing the demographic profile of the region.

Balochistan is today the most impoverished and backward province of Pakistan despite nature having provided to it a huge bounty of natural resources. The area contains copper, uranium, gold, coal, silver, and platinum deposits. In addition, about 36% of Pakistan’s total gas production comes from Balochistan; astonishingly, only 17% is consumed domestically while the rest is transferred to other parts of Pakistan, mainly Sindh and Punjab. Most of the mining is being done by Chinese firms with Chinese manpower and the proceeds are going to the federal government.

The Baloch’s should have been the richest people of Pakistan; they are the poorest because of crass colonisation which is a big reason behind the ongoing revolt.

This struggle for independence is being blamed to India, the US and Israel. What is being conveniently forgotten is that the people are fighting for their rights in the face of blatant economic exploitation similar to the one that led to the severing of East Pakistan (Now Bangladesh) from West Pakistan.

Pakistanis whose heart bleeds for imaginary atrocities on Kashmiri are not showing any sensitivity towards its own nationals. This morally ambivalent situation is untenable and the world needs to take cognisance of the same.

The struggle of the Baloch people is now getting international attention. After India, Israel too is likely to support the struggle. Yehudah Glick, Member of Knesset in Israel has said, “We in Israel identify with the suffering of the people of Balochistan.”

In a recent meeting of the UN Human Rights Council, Pakistan brought up the issue of Kashmir and India immediately responded by flagging the human rights violations in Balochistan and POK. “It would be in the fitness of things if instead of ritually raking up human rights issue elsewhere, Pakistan were to focus its energies on improving Human rights situation within Pakistan and Pakistan Occupied Kashmir,” said the Indian contingent in a strong riposte.

Having taken this firm and righteous stand, India is now expected to remain steadfast and take incremental steps, in concert with leaders of the Baloch freedom movement, to sensitise the international community towards the rights of the Baloch people.  It is widely believed that institutions of a “Baloch Government in Exile” in Indian would be a constructive step in the desired direction.