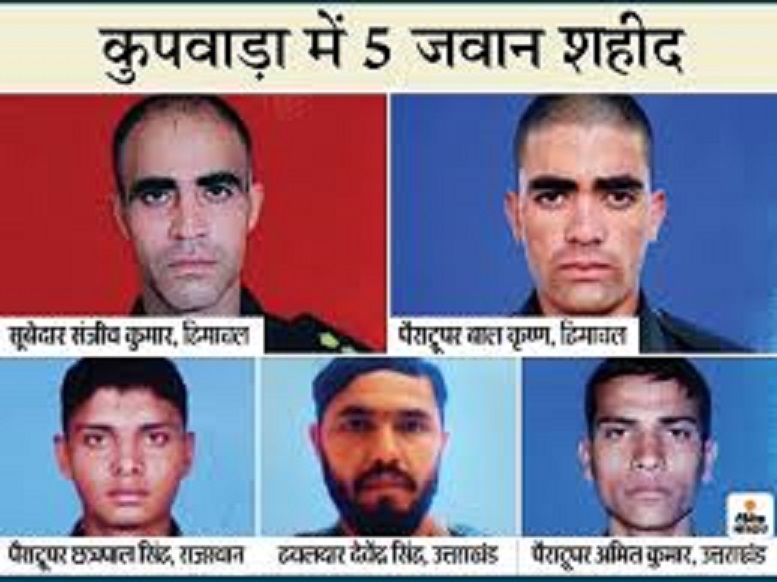 A deadly encounter to foil an infiltration bid in the Keran Sector of Kupwara, Kashmir, resulted in the ignominious death of all five terrorists infiltrated from Pakistan.  Sadly, it also led to the falling of five brave Indian soldiers tasked to hunt them down. The courageous and noble soldiers sacrificed their lives, and by so doing, also rid Kashmir of the lowest form of Vermin whom Pakistan nurtures to spread imbecility wherever they go.

While these parasites are in Pakistan, they cause mayhem in the lives of the hapless people of Pakistan Occupied Jammu and Kashmir (POJK), in whose lands they are stationed for long periods of time before infiltration into Kashmir. They indulge in open loot, extortions, violence and molestation of women. The people of POJK are fed up of their behaviour and often launch public protests against them, but to no avail; the Pakistan establishment remains determined to carry out its unholy agenda of sending these animals to Kashmir.

The terrorists once infiltrated are expected to continue with their unholy barbarous activities in Kashmir. However, most fortunately for the people of Kashmir, sustenance for these animals has been made impossible by the Indian Army, as is apparent from the recently conducted encounter.

Alert troops on the Line of Control (LOC) got to know of the infiltration bid in no time, assisted tremendously by the specialised radars and other equipment that has been deployed on the LOC fencing.  The Battalion on the LOC was able to make contact with the group and due the firefight that took place, the terrorists were forced to shed their heavy load and take cover in a deep Gorge. The troops on ground further managed to keep track the movement of the terrorists. They were isolated between the LOC and the Shamshabad Ridge. Over the next two days, on 2 and 3 April,  multiple Helicopter and Drone sorties were carried out to get the exact location of the terrorists. In this time period they were also isolated from the East and the West  and thus completely encircled. Once the position was known, reportedly at the Zurhama forest area, Special Forces (SF) were launched in extremely challenging terrain and on steep slopes to hunt them down. Footsteps of the terrorists were spotted by a SF team led by  Subedar Sanjeev Kumar. The tracking carried on for a few hours since movement was severely restricted by the heavy snow cover, but the team managed to close in.

It was at this stage that the SF team, unfortunately, stepped on a Cornice (hardened snow) that broke down and three of them including the team leader fell into a Nallah (water basin) below. This was the place where the terrorists were hiding. The terrorists had advantage over the surprised soldiers but in the ensuing epic combat, the soldiers, though in a position of disadvantage, took on the terrorists. The two team members who had not fallen in the Nallah also jumped in. When the fire fight ended, all five terrorists, including one who tried to escape lay dead. Three SF team members also fell while two were grievously injured. The army launched a massive rescue operation and the wounded soldiers were evacuated, but they could not be saved.

There are many derivatives that mark this heroic operation. The first is that the Indian Army, even in the most inclement weather conditions and hostile snow bound terrain retains the capacity to detect every infiltration bid made by the enemy and then track the same. Second, even the benefit of weather and terrain does not give the terrorists the leverage to move into the hinterland; if not on the LOC itself, they are neutralised within a few kilometers of moving in. Third, the Indian army is relentless in the pursuit of terrorists; once they are detected they are given no respite. They are hunted down like the animals they are, before they can organise themselves and cause harm to the civilian population with their vicious and immoral activities.

Pakistan’s attitude remains a source of great concern. It seems that no amount of setbacks can induce the nation to leave its immoral agenda towards Kashmir. It has been in a precarious economic condition for long now; there is political instability as Prime Minster Imran Khan has failed woefully to live up to his promise of ushering in a Naya (New) Pakistan; the country has been put under sanctions and great pressure by the international community to contain proliferation of terror from its soil; now the botched up response to the Corona Virus has created a huge problem that the Pakistani Deep State is trying its best to keep under wraps. Despite aforementioned issues and many more of equal criticality, the country refuses to relent from sending terrorists into India.

The recent set of five terrorists have been infiltrated with great preparation. They were heavily armed with  5 AK 47 Rifles, two Grenade Launchers, 2 Pistols and Satellite Communication gadgets. They also carried  a large quantity of ammunition, food and administrative stores.  Such preparation is not easy to come by. The manner in which the terrorists responded on being challenged also points towards a high level of training that would have been provided over months in the various terrorist training camps in Pakistan.

It would be worthwhile for the international community to, once again, impress upon Pakistan that it does not have any chance of  fructifying its evil designs in Kashmir. The beggar country should concentrate more on its own difficult condition than this exercise in futility that is further tarnishing its image globally.

India, deeply saddened  at the loss of its brave, honourable soldiers while fighting Pakistani  Vermin deeply mourns their loss and honours them for keeping the country safe to such pestilence.  The country stands as one in acknowledging, with great sorrow, the sacrifice of Subedar Sanjiv Kumar, Havildar Devendra Singh, Paratrooper Amit Kumar, Paratrooper Bal Krishan and Paratrooper Chhatrapal Singh who have proved, without doubt, that the country remains safe and secure in the worthy hands of its soldiers.