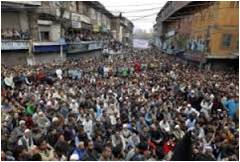 On February, 17, 2013, Ali Murtaza, a 22 year old resident of Gulhar, Kotli, in Pakistan Occupied Kashmir (POK) proceeded on a visit to his relatives residing near the line of control (LOC) with India. Three days later, his body was delivered back to his family by the district administration; it bore terrible marks of torture and mutilation. The devastated family has blamed the Inter Services Intelligence (ISI), the infamous intelligence wing of the Pakistan army, for the brutal killing. It seems that the intelligence agency got active after the tension on the LOC between India and Pakistan and Ali Murtaza became an unwitting victim of this enthusiasm. There is every possibility that Murtaza was killed because the ISI linked his presence in the area with the killing of a Pakistani soldier in the same area during the period under reference.

The complete region was devastated by this mindless killing and protests erupted in a number of places demanding withdrawal of the forces that are subjecting innocents to untold brutality without any valid reason. The very disturbing and barbaric incident also led to demands for a fair enquiry emanating from both the media and the civil society. The incident was covered in great detail by the BBC and is being written about extensively in the face book and other social media web sites.

The face book links have photographs of the deceased with visible marks of intense torture. The propaganda machinery of the Pakistan army has a large number of proxies who respond to all negative articles and inputs posted on the net. In response to the comments drawn from the civil society to this barbaric killing, the propagandist proxies of the ISI have gone overboard in trying to deflect attention from the brutal torture and killing. Their posts suggest that Pakistani soldiers would never do a thing like this, some posts are also making a bizarre suggestion that the killing was carried out by Indian soldiers and then the body dumped in Pakistan.

The family of the deceased Ali Murtaza, especially his cousins and well wishers who go by the name of Qamar Shahzad and Hasanat Ahmed have countered all such propagandist claims. They have fully corroborated the validity of the brutal incident by giving the exact address of the family to establish where the body has been handed over and buried. The house of the victim is 200 yards from Kohretra Chowk at Gulhar in Kotli, POK. Chaudhry Mehboob, a member of the legislative council of POK and a relative of Murtaza, said there were witnesses who saw him being taken away by intelligence officials near a border post in Khui Ratta, close to where a Pakistani soldier was killed, reportedly by Indian forces, in one of the many exchanges of fire at the LOC.

Under pressure from the media, the civil society and the general public, the Pakistan army on March, 01, 2013, said that it would carry out investigations into the torture and the killing. However, no details of the investigation have been made available so far. The iron grip of the ISI and the Pakistani administration on the region precludes any transparency in the judicial and investigative proceedings; there is an apprehension that the matter will be brushed under the carpet as is done in all such instances.

The region is not new to human rights violations of this nature. The Pakistani administration has been carrying out torture and political repression with impunity and most of it is being done by the ISI which has unleashed a reign of terror in the region. In this case the body of the victim, Murtaza, was returned because the people were in the know of his detention; otherwise, forced disappearances are a common practice in the region as are arbitrary arrests and torture. There are innumerable instances of people going missing after being apprehended by the ISI, in most cases they are held for going against the establishment and charged with having contacts with the Indians. Spying for India is considered to be the biggest crime and even the slightest suspicion in this regard leads to precipitate action of the type narrated above.

The sad plight of the people of POK is well documented; the lack of development and infrastructure, the exploitation of natural resources by the Punjabi elite as exemplified by the Mangla dam whose electricity generation is used by Pakistan Punjab without paying a single penny to the people of POK. In the social sector, almost zero education and health facilities amongst other pathetic parameters are all well known. It is axiomatic that while there is a check on human migration into the state of Jammu and Kashmir by virtue of Article 370, in POK, a concerted effort is being made to change the demographic by settlement of Pashtuns, Afghans and Punjabis in great numbers.

Sadly, the large volume of literature available on the subject is not leading to any international or Indian initiative to prevail upon Pakistan to change its policies with respect to their beleaguered region. As a result the people continue to suffer for no fault of theirs. India needs to look upon POK as a part and parcel of the country and the people as its very own citizens. A perception of this nature would automatically give rise to an urgent need to do everything possible to ameliorate the untold suffering that the people are being subjected to by ruthless and sadistic colonizers bent upon breaking the ethnic structure and identity of the region in pursuit of their greed. This should be a national obligation for India, no more, no less. The evolving social activism that India has recently witnessed needs to be extended to the people of POK whose suffering and deprivation is extensive. The brutal killing of Ali Murtaza can provide a good catalyst in pursuit of this noble cause.