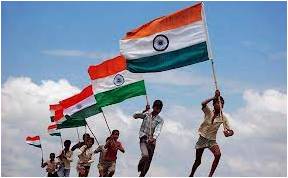 While in school, Independence Day stood second to Republic Day, after all, it did not have the grandeur and excitement of parades and cultural activities. As a college going student one looked upon the day as a welcome respite from attending lectures in hot and humid classrooms. On joining the Army things got a little better; on this day the junior commissioned officers of the unit called officers over for lunch. It was a good opportunity to bond with the “sardar sahibs” (as they are addressed). The evening was spent in some sporting activity, squash or basketball.

Now that one is in his late fifties and retired, whether it is republic day, independence day or birth day the feeling is invariably maudlin, with a host of questions crossing the mind. Has one done enough for the country? Are we, as a nation, on the right path? Are we, as the senior members of the national society, leaving behind an environment in which our children will be safe, secure and happy? With each passing year the answers veer more and more towards the negative, leaving in their wake a feeling of despondence.

This Independence Day could have been an exception; after all it is being celebrated in the wake of our best ever performance in the Olympics where we have picked up as many as six medals. Once again the devil in the mind came across to say, “only six for a nation of a 1.2 billion?” The reasons are multifaceted; they relate mainly to our inherent poverty; other factors are lack of a sporting tradition, infrastructure etc. Political apathy, of course, is the main culprit as in any and every progressive national endeavour.

Be that as it may, as an ode to our Olympic contingent, especially our victorious heroes, this piece on the occasion of the 66 Independence Day, is being dedicated to drawing out the relationship between sports and soldiering and its impact on the destiny of our young Nation.

There is a famous English saying, “The battle of waterloo was won on the playing fields of Eton.” This means that to produce good soldiers you need to first produce good sportsmen. It was the sporting tradition of England which made the tiny nation master of the world. There are valid reasons to support this thought process. A sportsman goes out into the field with a single minded objective to win. To ensure this, he puts in a tremendous amount of hard work and practice. As the level goes up he needs a perfect support system. This has been admitted in as many words by our silver medallist, Sushil Kumar. The Armed Forces also go into the battle field with the single minded objective to return victorious. They also put in hard labour during peace time to deliver in war, most aptly defined by the phrase, “the more you sweat in peace, the less you bleed in war”. Along with hard work they too need unstinted support of the nation mainly through the medium of the government. It is the government which is responsible to ensure that the forces get what they want, when they want, so that they can concentrate on their training and preparation. For this most governments, as in India, have exclusive Ministries of Defence.

If there is weakness in any of the two essential parameters the system fails to deliver. In a sporting nation the leaders and bureaucrats are in a better position to understand the odds that a soldier has to face in order to do his job well. They understand that winning is an off shoot of hard work with team spirit. They realise that politics tend to erode the system and need to be sidelined. They are absolutely alive to the relationship between sports and nation building.

This consciousness is very much prevalent in all sporting nations like the United States, European nations, China, Japan, Korea etc. In India, sadly, the leadership has failed to imbibe any such ethos. We learn no lessons from sporting nations like the United States where Presidents are known to make impromptu visits to soldiers in the frontline and share with them a meal without the trappings of pomp and ceremony. Our leaders will not be caught dead doing anything of this nature, after all, none of them plays basketball and golf like Barak Obama does.

Agreed, there is a lot of respect for soldiers in India, as there is a lot of respect and adulation for the winning sportsman. Unfortunately in India, as in sports so in defence, not enough is done to build the capacity and capability of the soldier, only when he exhibits astounding feats of valour, which India soldiers do all the time, the nation stands in rapt adulation for some time and then it is business as usual; take the instance of the Kargil war and its aftermath. This is the difference between a sportsman and an audience, the sportsman takes a challenge to its logical conclusion despite odds; the audience basks in reflected glory. India is one big audience; sportsmen are few and far between.

Sixty five years mean nothing in the history of a nation, in fact, the actual trials and tribulations of India are yet to begin, this will happen when the country vies for its rightful place in the global community; when the world looks upon India, not as a nation to be pitied, but as a strong competitor to reckon with. That is the stage when “sports induced, military maintained killer instinct” will make the difference between being a gold medallist or an audience basking in reflected glory. A final word of caution, the government may get away with a complacent attitude towards sports, but it needs to understand that there are no runners up in war.