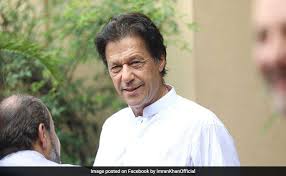 Imran Khan, in all probability will be the next prime minister of Pakistan; the goal, though not realised as yet, looks to be a distinct possibility. It has taken him 22 years to fulfill this dream. While lauding his perseverance, one is inclined to feel that for him the nightmare has just begun. He has proverbially “sold his soul to the devil,” which, in this instance, is the all powerful Pakistan Army. Sitting in opposition and haranguing against the government is a better option than becoming a lackey of “the establishment.”

The foregoing, however, is a personal choice of the cricketer turned politician and he will pay the price for the same, good or bad. What is relevant here is the impact of this change in the political spectrum of Pakistan on the already tenuous relationship of the country with India.

In his first address to the nation as a probable candidate for the premiership Imran spoke extensively on ties with India. “We are ready to take two steps forward if you take one,” he said. One wonders if the same is an indication that he would expect India to take the first step, which would altogether change the perspective of his extended hand of friendship. Further on, he identified Kashmir as the core issue between the two countries. “The biggest dispute between us is about Kashmir. We need to talk about Kashmir… We’re still on Square 1. India sees Baluchistan, we see Kashmir… this blame game has to stop. The situation in Kashmir, the human rights violations, deploying army there… Kashmiris have suffered. The leadership has to find a way out,” he said as quoted by NDTV.

It has become quite apparent from the foregoing statement that India-Pakistan relations, especially with regard to Kashmir are unlikely to stay in “Square 1” under the watch of Prime Minister (designate) Imran Khan. Jammu and Kashmir will, in all probability, witness an escalation in the activities of those forces in Pakistan that are engaged in causing disruption and divisiveness in the state.

The thrust will remain on drastically increasing the level of violence by giving a boost to terrorist activity. With infiltration becoming more and more difficult, maximum effort is likely to be directed towards the recruitment of local terrorists. Massive sums of money will be earmarked for this purpose and recruitment conduits from among the existing terrorist cadre and the sympathetic civilian elements will be boosted.

On the political front, the separatist element is likely to be energised. Already, statements demanding resumption of talks with Pakistan have started doing the rounds with the separatist leadership expressing the hope of a “stable government in Pakistan resuming dialogue with India.” In Pakistan it does not matter if the civilian government being stable or instable since it is the Pakistan army that dictates the India policy. The Nawaz Sharif led government toed the Army line so far as Jammu and Kashmir was concerned and so will the Imran Khan led government. In fact, having literally hoisted Imran Khan on to the chair, the Army will have more authority which will be used to raise the ante.

The reference of the Prime Minister designate of Pakistan to human rights violations in Kashmir, deployment of the army and  so-called “suffering of the Kashmiris” leave no doubt about the posture that his government is likely to take internationally. India will need to remain ready to dispel all misrepresentation and distortion of facts that the Pakistani diplomatic corps will definitely bring up in the United Nations and other International forums.

However, what Imran Khan intends to do in Kashmir is easier said than done!

The concept of Jihad and the cult of terrorism that Pakistan has so assiduously sponsored over many decades have been rejected in Kashmir by the very people whom it was supposed to liberate; in fact, the attempt has witnessed a convincing defeat. Attempts towards resurrecting the same by any means remained unabated during the Nawaz Sharif regime as they will in the new dispensation, but these are unlikely to succeed.

The people are fed up of the separatist Hurriyat! More so of the protest calendars being issued by it which they have started ignoring to whatever extent possible. Hurriyat is not likely to see any credible resurrection of its status through the Imran Khan regime. There will be some escalation in rhetoric with an incremental free flow of “moral support.” The same, however, is unlikely to translate into a bigger financial package as the separatists would be looking for.

There is a hope in certain quarters that Imran Khan will be able to garner more international support for Pakistan’s posture on Kashmir. This is not likely to happen! Most countries, especially the powerful ones, have already accepted that Jammu and Kashmir is inalienably a part of India and there is not much that Imran Khan can do to offset this perception. Most countries, including the Muslim states, do not wish to get involved in arbitration of the so-called Kashmir dispute that Pakistan consistently attempts to raise. More astute political leaders of the country have understood as much and they maintain a discreet silence on the subject. One can only hope that Imran Khan will learn from his predecessors and desist from embarrassing himself and his nation unnecessarily.

The people of Kashmir should not be taken in by the propagandist rhetoric of the separatists and other anti-national elements. Imran Khan is no messiah and nor are his intentions in the interest of the people. It would be best to concentrate on the development of their land and saving it from covetous foreign eyes as hither-to-fore.

At the national level, while acknowledging the diplomatic sophistry that Imran Khan has already directed towards India, which will gain momentum in the coming period of time, it would be best for the country to remain vigilant on the operational, political and diplomatic front. The silver lining is that there is not much that he can do since the situation is firmly in control.