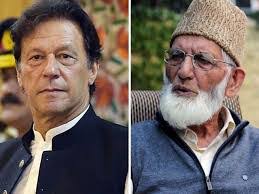 In the wake of the bifurcation of Jammu and Kashmir into two Union territories and abrogation of Article 370, the political structures in Kashmir that were aligned with separatism and soft separatism have been left without viable agendas. Syed Ali Geelani, one among the tallest leaders of the Hurriyat Conference, chose to resign from all posts in June, 2020. He listed a number of grouses against the organisation as reasons for his resignation. Significant among them was  an inability to get together a movement against the above mentioned change status of the state in August, 2019. He, of course, realises that Hurriyat was in no position to do anything but, with the letter and resignation, he is absolving himself and his loyalists of all responsibility.

A bigger reason for the resignation is his failing health. He is bedridden and  senility has caught up with him. His family members apparently wish to leave his political legacy behind and move on towards their own diverse and very successful professional domains. The conferment of Nishan-e-Pakistan, the highest civilian award in Pakistan to Syed Geelani the final encore to his lifelong service to the enemy country. The move is designed to put a final lid on the Geelani chapter. With Geelani out of the reckoning, the Pakistan Inter Services Intelligence (ISI) has lost its main points man in Kashmir and that too without a replacement.

The second big Hurriyat leader, Mirwaiz Umer Farooq, has remained silent all through the period of socio-political change. There were many methods that could have been adopted by him and his organisation to remain active but these were not put in motion. He chose to remain under wraps, probably due to the realisation that there was not much left to be said in view of the widespread acceptance of the new order in Kashmir.

It was against the backdrop of Geelani’s resignation that some Hurriyat leaders met in July under the chairmanship of Mirwaiz. These include Prof Abdul Gani Bhat, Maulana Abbas Ansari, Bilal Lone and a few others. Post the meeting, the Hurriyat stated that the Kashmir dispute has to be resolved peacefully among the three stakeholders – India, Pakistan and the people of J&K. What is significant here is that immediately after the resignation of Syed Geelani the Hurriyat rid itself of his rigid stands on Azaadi (freedom) and amalgamation with Pakistan. The Hurriyat now realises that coming out of the existing morass of political irrelevance is possible only through a conciliatory approach that keeps open an option of dialogue with the centre at some time in the future. Hence, the Azaadi movement is all but history so far as the Hurriyat is concerned.

It may be recollected that Prime Minister Imran Khan made a huge effort to garner international opinion against India when the decision for the change in status of J&K was made. He went to the United Nations and many countries and made hysterical pleas for action against India while predicting dire repercussions of large scale turmoil in Kashmir if such action was not taken. He was singularly unsuccessful since the international community did not take him seriously and the predicted turmoil did not take place in Kashmir. This failure left Khan in a very tenuous situation with the enraged Pakistan army wresting the Kashmir policy from him.

Imran Khan is a lucky man. As the irrelevance of the Hurriyat rang alarm bells in Pakistan, the ISI found in Imran Khan a suitable poster boy replacement for the diminished leadership of the organisation. Imran Khan has taken to his new role as fish takes to water. He openly declares his so-called campaign against India over Jammu and Kashmir as a key achievement of his political career. In recent days he has visited Pakistan Occupied Jammu and Kashmir (POJK) several times as part of his campaign  to malign India. The campaign has been launched on the first anniversary of the historic changes in J&K. While making the usual wild allegations against India and directly attacking Prime Minister Narendra Modi in a most unbecoming manner, he has been spouting untruthful boasts  and blatant lies of having convinced the United Nations and many top leaders like Donald Trump, Boris Johnson and Angela Merkel against India. The hidden political agenda is to project himself as the sole voice in Pakistan standing for the Kashmir cause because it is here that his survival is now hinged.

A second and more important reason for these frequent visits to POJK is the panic within the Pakistani establishment caused by the concerted diplomatic, political and military moves by India to take back the occupied territories. Pakistan wishes to ensure that the people of POJK do not speak up.

The ISI has created The Resistance Front (TRF) in Kashmir with a twin purpose of diverting attention from terrorist organisations like the Lashkar-e-Toiba and Hizbul Mujahideen and also strengthening Imran Khan’s diatribes through engineering of violence in Kashmir. Thus, the new players in Kashmir are Imran Khan as a one man Hurriyat Conference and the TRF cadres, controlled directly by the terror masters in Pakistan, as the on ground sword arm. As Imran Khan makes one provocative statement after another, the TRF supports it with the killing of innocents in Kashmir. This is the reason behind the barbaric murder of so many Sarpanches, Panches and political workers in recent days.

The new policy created by Pakistan is indicative of the diabolic mindset with which the country approaches its Kashmir agenda. It is ready to denigrate the stature of its prime minister in order to keep its presence alive. However, the country is now fast losing out on viable options. With the Hurriyat marginalised and terrorism waning Imran Khan cannot sustain the campaign for long, however much he may try.

(Hardip Bedi is a senior Delhi based journalist and writer)