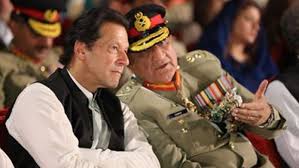 The perfidious power play in Pakistan has attained a notorious, dishonourable status. Gen. Qamar Bajwa continues as chief while the Imran Khan government is left to grapple with the directions given by the Supreme Court of the country. This web of deceit smelled rotten right from the word go and has, not surprisingly, left the main protagonists (Imran Khan and Bajwa) with egg on their faces.

The basic fault line in the drama has been highlighted by the Supreme Court most lucidly. “If the [regional security] situation is so then the army as a whole body can deal with the situation, not the individual. If this criterion is allowed then every individual in the army can demand an extension on the same grounds,” said Asif Saeed Khan Khosa, Chief Justice of Pakistan, in what can be termed as the most telling indictment of the decision to extend the tenure of the Army Chief.

A fair assessment would lead to a conclusion that, under Gen. Bajwa, the Pakistan Army has attained its weakest position ever, both professionally and as virtual rulers of the country.  It has completely lost the initiative in Kashmir from where it got its sustenance. It has antagonised its biggest ally, America, and as a result is suffering a crippling resource crunch with no aid or weapons coming in. It has completely lost its hold in Afghanistan as a mediator and in relations with the Taliban. Bajwa has been unable to leverage on the good work done by the previous Chiefs in containing internal militancy and, as a result, the internal security situation has deteriorated considerably.

Bajwa has been openly accused by opposition politicians of electoral manipulation, meddling in politics, suspension of civil liberties and muzzling of the media to help Khan win elections last year. There is no reason to disbelieve these allegations. Imran Khan became prime minister with support of Gen. Bajwa and will remain so as long as the support remains. He, therefore, has mooted for the extension to save his own chair which is getting shaky. He knows that the best way to ensure continuity is to back a known horse; there is no saying what a new Army Chief would do. Under the circumstances, there are not many takers to the argument of “continuing tension with India over Kashmir” that Imran Khan is giving to justify the extension.

There are many associated factors that also need to be considered, the main being the fear that the word “Bajwa” strikes in the hearts of all Pakistanis.  The Jurist Foundation had challenged the extension and the petition had been filed by a person named Raiz Rahi. The petitioner developed cold feet almost immediately and sought to withdraw the application. The Chief Justice, however, rejected the withdrawal and took up the petition as a public interest litigation under Article 184. In a second equally bizarre episode, the law minister of the federal government, Farogh Naseem, resigned in order to represent Gen. Bajwa in the court. Naseem was terrified at the prospect of becoming a scapegoat in the entire fiasco and he genuflected in the most demeaning simply to save himself. The two instances indicate the reign of terror that presently envelopes Pakistan under the watch of Gen. Bajwa and Imran Khan.

Interestingly, a section of the media is most courageously supporting the Supreme Court and more and more voices are being heard against the decision of the government. “This is without a doubt the most shambolic episode in the PTI government’s tenure so far,” says an editorial in Dawn, a leading English Daily of Pakistan. “Surely there are other officers more than capable of leading the army. General Bajwa’s next step will determine whether he is thinking of himself or his institution,” it adds.

So sure was Gen. Bajwa of his unassailable position that he had already brought about wide ranging changes in the military hierarchy to suit his extension. He has appointed Lieutenant General Sahir Shamshad Mirza, as his new Chief of General Staff (CGS). General Mirza will be the senior-most among those eligible to become Army Chief after General Bajwa retires in 2022. Getting him on to his side was very crucial indeed to offset Lieutenant General Sarfaraz Sattar, who was poised to take over as Chief and will now retire on being superseded. The Corps Commanders have also been shuffled. Obviously, Gen. Bajwa was afraid of an internal backlash from the army which has propelled him into making the changes. That some in the Army are backing the action taken by the Supreme Court is not beyond the realm of reality.

The Supreme Court may have given Gen. Bajwa some respite but the matter is unlikely to end here. The court has announced the extension of six months on the basis of an assurance given by the Government that it will, within this period, make the required amendments in Article 243 of the Constitution and specify the appointment, extension and tenure of the Army Chief. This is easier said than done. Even if the PTI led government can muster the numbers to get the amendment through, the opposition will subject it to loud and acrimonious debate. The end result will be the Army coming into public discussion for the first time, something that may strengthen democracy in the country but will damage the “holy cow” status of the establishment.

There remains no doubt that this self-serving move will dent the image of the Pakistan Army and weaken it considerably. The hollowness of the incumbent government also stands exposed. The situation can best be explained as a “lull before the storm.” The ultimate outcome is bound to leave Pakistan weakened and unstable. This opens the possibility of external aggression to offset internal issues, whereby, India will be adversely impacted. It is time to consolidate security in Kashmir and other parts of the country too.

(Jaibans Singh is a reputed Geo-strategic analyst, columnist and author)