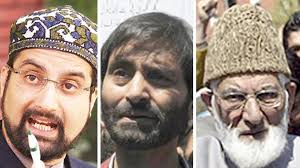 The inherent fissures within the All Party Hurriyat Conference (Hurriyat) are well known. In recent days they have become all the more prominent, leading to what is widely being perceived as an existential crisis for the conglomerate.

The Hurriyat has been steadily losing its clout and relevance over the last few years since people have seen through its self serving and disruptive policies; they have understood that it is standing in the way of their desire for peace and prosperity.

Now, it has been badly hit by demonetisation and the probe being carried out by the National Investigation Agency (NIA) into the illicit and criminal funding of terror and disruptive activity in the Kashmir Valley. The constituents of the Hurriyat conglomerate are under the ambit of the investigation.

The resultant choking of funds and arrest of the many conduits through which this criminal activity was being carried out has caused a state of complete disarray in all sections of the conglomerate.

True to form, the so-called leaders have thrown ideology to the winds and have got into self preservation mode. Syed Geelani, known for screaming anti-India diatribe the loudest, has suddenly become most accommodative; now he wants the world to believe that he was never against talks with the centre and the state government.

Many believe that this change of heart is motivated less by ideology and more by the fact that his son-in-law, Altaf Fantoosh, and many other functionaries of his party have been arrested under the ongoing NIA investigation.

Geelani’s new found accommodative posture has added a new dimension to the Hurriyat dilemma in dealing with the idea of engaging in talks with the Government of India.

Suddenly, the biggest Hawk has turned Dove and weakened the high handed posture that the Hurriyat normally takes when faced with such initiatives. It is important to highlight here that the high handed posture is adopted at the behest of the Pakistani handlers who do not want any such dialogue to take place in Kashmir of which they are not a part.

It may be recollected that Parliamentarians and eminent citizens have been summarily turned away from the gate by the so-called Hurriyat leaders in the past.

Now, Geelani’s mantle of rigidity has been taken over firmly by Yasin Malik, who is showing great bravado in his statements. He is trying to gain as much leverage from the situation as is possible and has shown aspiration of unseating Geelani as the biggest Hawk going.  The Hurriyat chairman Mirwaiz Umar Farooq is, as usual, maintaining a stoic silence; he seems to have become totally ineffective as chairman of the conglomerate. So we have a situation where the problem remains the same while the actors are undergoing a change.

The situation is such that yet another split in the Hurriyat seems to be a distinct possibility. The only reason why it has not taken place till now is that Pakistan considers such a situation as detrimental to its already weakening position in Kashmir. The Hurrioyat has split on three occasions earlier but remains connected, however loosely, due to pressure and insistence of Pakistan. Pakistan has ensured that the many factions function from one office in Islamabad and statements issued are jointly signed by all constituents to show, at least, unity of purpose.

While the Hurriyat is going through the aforementioned internal turmoil, it is becoming increasingly apparent that the central government as well as the Government of Jammu and Kashmir are very eager to take forward the political process. This motivation is the result of the security forces having, once again, created an environment of stability wherein the same is feasible. Losing out the chance now would be politically counterproductive for them.

The ball was set rolling by Prime Minister Narendra Modi during his Independence Day speech on 15, August 2017, with his iconic statement, “Na goli se, na gaali se, Kashmir ki samasya suljhegi gale lagaane se (Kashmir’s problems can be solved only with embracing the people of Kashmir, not with bullets or abuses).

Senior ministers of the Union Government are making frequent visit to different parts of the state and meeting a wide range of people. Home Minister Rajnath Singh has gone on record to say that he is carrying out meetings with a wide range of people in order to find a political way forward.

It is very unfortunate that the Hurriyat obviates any possibility of dialogue by issuing Hartal (Lock out) calls whenever such an initiative is taken by the government.

Appointment of Dineshwar Sharma as an interlocutor is a step in the right direction. It will give organisations like the Hurriyat an opportunity to become a part of the dialogue process without giving an impression of dealing with the government directly.

Sadly, the Hurriyat is not looking at this development as an opportunity to move forward.  Dineshwar Sharma has culminated his first visit to Jammu and Kashmir without meeting any representative of the Hurriyat. The positive side is that a large segment of the remainder political leadership and civil society have reached out to him, which indicates that his role in the political process is acceptable to a large segment of the state.

This is the time for the Hurriyat to resolve its internal contradictions and opt for a serious and meaningful dialogue. This is the need of the hour and the aspiration of the very people whom it professes to represent. In case it does not do so, it will get even more isolated politically. Sadly, the Hurriyat is not looking at this development as an opportunity to move forward and is, as such, teetering towards irrelevance.

(Dr. Simrit Kahlon is an academician, a writer and a political analyst)