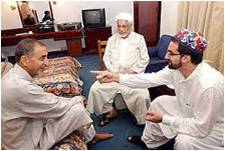 There is a lot of excitement in the Hurriyat camp these days; its leaders are getting ready for their periodic sojourn to Pakistan which, after due deliberation with the Pakistani diplomatic set up in India, has been slated for December, 15, onwards. The agenda would include a visit to Pakistan Occupied Kashmir (POK) to confer with the political leadership of the region. The delegation will also meet businessmen in POK (in case there are any) and the civil society (for whatever it is worth). Only after these meetings would the delegation engage with the leadership of Pakistan.

It is notable that the Pakistan’s spy agency the Inter Services intelligence (ISI) looks upon such events as an international media opportunity to get its word across. It will, therefore, leave no stone unturned to present a rosy picture of Pakistan and POK to the visiting delegation. One can only hope that the delegation will see through the hype and attempt to gain hands on experience of the exact level of exploitation that their brethren across the line of control are being subject to. Time will tell if they have the will put conscience over politics. Chances are that the delegation will mutely listen to the lies that the ISI would have undoubtedly laid out for them and come back with a few kilos around their midriffs as a result of partaking the sumptuous non vegetarian fare that would be laid out for them.

Not all leaders of the amalgam are in favour of the trip; some like Shabir Shah have seen through the political manoeuvre of the Pakistan Peoples Party to use the visit as a ploy to boost its chances in the forthcoming general election in the nation. After all, what better emotive subject to highlight at this critical juncture than the party’s supposedly undeterred support to the cause of Kashmir? “Pakistan is preparing for elections, what are we going to do there in such a situation? So I have conveyed the Hurriyat Conference that this is not the proper time to visit Islamabad,” Shah has been quoted by newspapers to have said.

Despite the internal reservations, the Hurriyat started doing the ground work to produce the results desired by the ISI. In an effort to broad base their game plan the amalgam has held meetings in Kashmir with all such Indian rights activists who harbour a misconceived and motivated anti-Indian and pro- Hurriyat sentiment. This move has, of course, elicited a sharp response from the nationalist forces in the State of Jammu and Kashmir who have, for long, been terming this hobnobbing as a dangerous trend which is fanning secessionist tendencies.

Even as this drama is being played out in Kashmir and will be further played out in Pakistan, India is getting ready to host Pakistan interior minister Abdur Rehman Malik during his proposed pilgrimage to Ajmer Sharief in January next year. One does get a nagging impression that the religious diplomacy being played out by Pakistan is directed towards the higher agenda of getting Prime Minister Manmohan Singh to visit the country.

Under the circumstances the question that arises is – where exactly are we going so far as relations with Pakistan are concerned? Pakistan openly interferes in India’s internal affairs, hobnobs with secessionist elements, provides to them diplomatic and economic support and is continuing with its efforts to fan insurgency and terrorism in the State of Jammu and Kashmir. It cannot be denied that there has been no visible Pakistan sponsored terrorist activity in the country after the 26/11 terrorist attack at Mumbai in 2008, but this has more to do with India’s enhanced internal security umbrella and international pressure on Pakistan to relent from its nefarious activities. The possibility of terrorist attacks in the future cannot be ruled out since the perpetrators of terror in Pakistan are still at large and will definitely confer with the visiting Hurriyat delegation overtly or covertly or both. After all this Pakistan has the gumption to seek a visit by the Indian Prime Minister to give an impression that relations are on the mend. India, it seems, has no clear cut response to these shenanigans except to let things flow and maintain a stony silence.

The government of India should adopt a clear cut policy of not tolerating secessionist activities under the garb of democracy. In application of this policy it should stop Hurriyat leaders from meeting the Pakistan government personages visiting India, regardless of the supposed denting of the democratic credentials that a move of this nature may entail. Further, there should be no question of allowing the amalgam to visit Pakistan knowing full well that the purpose is to raise anti-India sentiment. There is also a need to put to an end the religious diplomacy initiative launched by Pakistan and rest all doubts about the visit of the Prime Minister to Pakistan. The visit is not opportune so why leave the whole thing hanging in the air.

So far as the Hurriyat is concerned it should listen to sage voices in its midst which have laid out Pakistan’s objectives in this political initiative in the most lucid and truthful terms. The amalgam will achieve nothing by going but, in the process, is likely to dent its already fractured credibility in the eyes of the Kashmiri people. Hurriyat leaders who are rooting for “putting the house in order before moving out” are very correct in their approach.

Hurriyat leaders have no business to visit Pakistan and Pakistani leaders have enough Sufi shrines in their own country which they should visit rather than running to the holy Ajmer Sharief to further their political agendas. The sooner Indian makes a stand of this nature evident and effective the better.