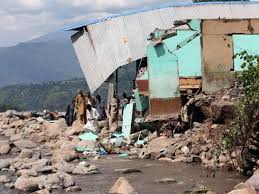 Substantial areas of the state of Jammu and Kashmir including Pakistan Occupied Kashmir (POK) were afflicted by floods of mammoth proportions in beginning September this year. On September, 07, Pakistan Prime Minister Nawaz Sharif visited the flood affected areas of POK. He was greeted with slogans of “Go Nawaz Go” which reflected the frustration of the people with regard to the apathy of the federal government of Pakistan in dealing with the very critical situation.

The slogan “Go Nawaz Go” has since gained popularity across Pakistan especially in the camp of Imran Khan’s Pakistan Tehreek-e-Insaf (PTI) party. It was used extensively during the visit of Nawaz Sharif to the US for addressing the United Nation General Assembly and in London during PTI rallies. Within Pakistan, it is the basic slogan during anti-government protests. In fact, PTI has converted it into a rather derogatory song.

The slogan has gained political momentum but the people of POK who coined it to emphasise their terrible condition continue to be in dire straits. Their situation is not being associated with the slogan. They are not getting any attentions because the area is being kept under wraps by the federal government with not much information coming out. There is negligible local media and insignificant footprint of either national or international media over there.

Some overseas organisations fighting for the rights of the people of POK are making an attempt to highlight the plight of the people.  The chairman of the United Kashmir People National Party, Sardar Shaukat Ali Kashmiri, has given a number of interviews to bring into focus the appalling situation in POK. He holds the view that the hapless people have not even overcome the massive earthquake of 2005 and now they have been totally ruined by the massive floods. He feels that the so-called government of Azad Kashmir which is under the control of four lent officers of the federal government of Pakistan has neither the means nor the authority to carry out rescue and rehabilitation, the federal government is uninterested and the army is nowhere to be seen, hence, the situation is degenerating from bad to worse. Many experts agree with his viewpoint.

People in POK are surviving in broken down tented colonies in constant fear of the looming winter. There is scarcity of food, warm clothing and above all medicines. Children have stopped going to school since long. The area may soon be in the throes of an epidemic.

Unlike the Indian army, the Pakistan army does not involve its self in rescue and rehabilitation operations beyond the minimum requirement. In places like POK it does not do even what is minimally required. The responsibility is placed entirely on the shoulders of the local government which lacks necessary equipment, aid and infrastructure to respond.

International Non-government Organisations (NGO’s) and civil society organisations which wish to extend help are not being allowed to function in POK citing security constraints. International aid from countries like Saudi Arabia and even the United States is being given for disbursement to sham NGO’s like the Jamaat-ud-Dawa and its satellites which are actually front organisation of terror outfits like the Lashkar-e-Toiba (LeT). A major portion of the aid is being used by these organisations to fund their terror activities against India and to attract recruits.

Experts are of the view that with 40 percent of the affected people of POK under the poverty line, rehabilitation is all the more difficult. They simply do not have any personal means or support to bounce back and are totally dependent upon the government. The government, in turn, is not forthcoming thus making things even more difficult for them.

On September, 07, Prime Minister Narendra Modi visited the flood affected area of the Kashmir valley, he held a detailed meeting with the officials , declared the situation a national calamity and granted an immediate relief package of Rs 1000 crore which has been followed by another package of Rs 750 crore. Conscious of the deteriorating situation in POK he made an offer of all possible help to the people there.

Stung by the confrontational reception that he received in POK as compared to successful initiative by the Indian Prime Minister, Nawaz Sharif imposed upon the so-called “Parliament of Azad Kashmir” to attack the relief process in India. On September, 22, this illegal and toothless body had the temerity to call upon India to open the line of control so that rescue could be carried out in Indian territories. This appeal came at a time when the rescue operation in the Kashmir valley was all but over and the area was well into the rehabilitation phase while POK continued to be on the edge.

Prime Minister Nawaz Sharif’s popularity is already hitting a nadir. If not for the people of POK at least for his own political career Nawaz Sharif should realise that it does not pay to play politics with humanitarian issues.

The situation in POK is fast becoming one of the biggest human tragedies in the world. POK has many issues concerning governance and political rights, but for the moment they need to be set aside to deal with the humanitarian crisis. The world needs to overcome the Pakistani attempt to push the tragedy under the carpet and respond to the cry for help emanating from the region. The United Nations needs to send a fact finding mission there and make public the findings. The region needs to be opened to the international media so that the actual picture comes out. Beyond this all possible assistance needs to be extended to the beleaguered people and that too directly.

India, in particular, needs to mobilise all resources to ameliorate the poor condition of the people, more so, since it is Indian citizens under foreign occupation who are suffering thus. All possible political and economic means need to be put to use to overcome Pakistani resistance and reach out to the people.