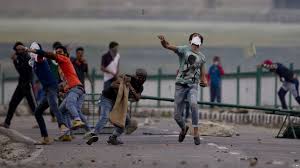 The ongoing wave of violence that has gripped the Kashmir Valley for the last few days, post the killing of the Hizbul Mujahedeen (HM) terrorist Burhan Wani, is causing unprecedented damage to the region in economic, social and most importantly – human terms.

One would not call it irreparable because the region has seen worse and has yet bounced back due to the sheer resilience of the people.

Reports suggest that as many as 21 police stations or other government buildings have been set ablaze in the violence. Besides this, it is being reported that 46 other properties have been damaged by unruly crowds and more than 1400 security personnel have received injuries in the ongoing violence.

Security assessments are pointing towards a concerted, well organised attempt by inimical, disruptive forces to maintain the momentum of protests.

Well briefed, well paid, indoctrinated and professional protestors are specifically targeting the security forces by multiple and innovative means. The tactics are leading to many of the security personnel receiving grievous injuries.

Hysteria is being whipped up; exaggerated numbers of civilian casualties are being spread to mislead people onto violent actions as a part of huge mobs against few police constables on duty.

Initial provocation comes from a seemingly ‘unarmed’ mob that invariably gets manic and violent, leaving the security forces vulnerable to damage and injury, some are maimed for life and one has lost his life.

Blatantly false allegations are being leveled that security forces are dragging people out of their homes and targeting them. Injuries are being attributed to bullets or pellets or shells when, in actuality, most are self-inflicted, superficial wounds.

It is, in fact, the security force personnel who that are in the receiving end of serious injuries.  This is because frenzied mobs in hundreds are attacking small piquets, posts and patrols of security forces and overwhelmingly at numerous places across the valley. The attacks are being carried out at different times of the day and night. In many cases the security forces stand outnumbered, yet they do not react with all the force at their disposal.

Many instances have come to light where weapons and other war like stores have been snatched from security personnel, especially from Jammu and Kashmir Police.

There have also been instances of security forces drawing fire from the crowd which is another proof of the terrorists being part of these mobs. There are many security personnel with grievous blunt injuries causing fractures on various parts of the body inflicted by heavy stone pelting.

Splinter injuries are being caused by grenades that are hurled by terrorists taking advantage of the mob, some section of which is evidently shielding them.

An example of the ruthlessness being shown by terrorist sympathisers who mingle with the mobs is the tragic incident of 10 July when a police person was thrown into the River Jhelum along with his vehicle resulting in his death.

These are not democratic protests with placards and slogans; they are violent and sinister actions by inimical forces.

The sustained and escalated incidents of violence in the Kashmir Valley definitely have the signature of a foreign hand pulling the strings and providing the finances.

They put paid to the assertions of the separatists that they follow the path of “peaceful protest” in pursuit of their so-called Movement for Azaadi (Freedom). Despite so much of blood shed it is yet not clear as to from whom they want this Azaadi and for what purpose considering that Kashmir is already part of one of the most vibrant democracies in the world.

Experts are very appreciative of the restraint that security forces are exercising even at the peril to their own lives. The idea is that the protest should not be escalated by reprisals leading to a chain reaction. This restraint is responsible for keeping the situation under some degree of control.

Another big reason behind the restraint is that security forces share the pain and the loss that is being felt by the common Kashmiri due to the ongoing disruption. This sentiment has been expressed so well by a CRPF person undergoing treatment for a fractured face due to stone pelting to a national TV channel. He said that he found it “difficult to use force against his own countrymen even on such grave provocation”.

While there is ample testimony of the utmost restraint that our security forces are exercising even at the peril to their own lives, there is reason for the government to dwell on the situation and come up with some out-of- the-box ideas to deal with it.

It is very clear that, under such circumstances, the security forces are working with literally both hands tied behind their backs. They are, as such, not in a position to do justice to their responsibility of maintaining the territorial integrity and sovereignty of the state. They need to be adequately empowered to deal with situations of the type that are being faced presently.

It would be suicidal for the government to stay quiet when anarchy rules the roost and the adversary’s becomes more and more confident by the day. The restraint of the security forces is out of sheer concern for the wellbeing of the people. This however should not become an impediment in the exercise of security functions.

It is quite well understood that, in the end, it is the peace loving majority of Kashmir which will prevail over the misguided lot and compel the latter to eschew the path of violence. This, however, should not serve as a reason to linger on an explosive situation that is looking for a firm solution.