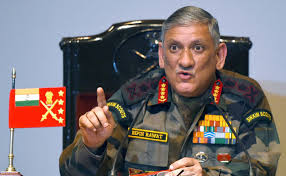 “Foot in mouth” is accepted as a common affliction for politicians universally and more so in India. Of late, this affliction seems to be attaining unprecedented heights with the Indian Armed Forces also being subjected to some very ill-informed, obtuse and crude comments by politicians.

Recently, a state minister of the Mehbooba Mufti led government of Jammu and Kashmir actually had the gumption of pontificating on what the army should do and not do in Jammu and Kashmir. He liberally spread egg on his face by commenting on a statement made by none less than the Indian Army Chief.

On 12 January, Indian Army Chief, General Bipin Rawat, addressed a press conference in New Delhi as a part of the Army Day celebrations. In the course of the conference the General raised a very relevant issue regarding imparting of education in the sensitive, terrorism afflicted state of Jammu and Kashmir.

“In schools (Jammu and Kashmir) there can be seen two maps, one of India and another of Jammu and Kashmir. Why do we need a separate map for the state? What does it teach the children?” said the Army Chief.

By so saying the chief was flagging the need to check radicalisation of the youth through the medium of education. He was highlighting the concern of the security forces about locals getting indoctrinated into the cult of terrorism, which needs to be checked to save them from certain death.

A regrettable response came by in the form of a statement by the state education minister, Altaf Bhukhari, who called upon the army to stop meddling in the “affairs of the state.”

The response is so ridiculous that it should logically be ignored with the contempt that it deserves. However, such stupidities, if left to simmer, cause a larger damage to the already fragile psyche of the youth in the Kashmir Valley, for which reason, they need to be nipped in the bud.

“I do not know what the Army Chief has said or how he said it, but what I know is that our children are not going towards radicalisation,” said the minister.

If the Kashmiri youth is not going towards radicalisation, as Altaf Bhukhari is stating so emphatically, then how come the figure of active local terrorists operating in the state is 60 percent of the total? Why is it that more than 80 local terrorists have been killed in counter terrorist operations in Kashmir in 2017 in a total of nearly 200?

The minister went on very proudly to state that the state’s students and teachers were “very efficient”, and “some have topped the IAS exam”.

Perhaps the minister does not know that maximum number of students of the Valley who have passed competitive examinations have studied in Army Goodwill Schools and/or taken coaching under Army run initiatives.

Every year since 2013, a select number of students from economically weaker sections of society in Jammu and Kashmir who possess an aptitude and capability to sit for competitive examinations in the Engineering stream have been picked up for coaching under aegis of the Indian Army. The initiative called the Super-40 witnessed a record nine students clearing the coveted competitive examination this year.

It would not be out of place to remind the minister that Army Goodwill Schools running under the aegis of Operation Sadbhavna, a welfare initiative of the Indian Army, are educating more than 10000 students in the Kashmir Valley itself. These schools have been instrumental is meeting the pressing educational requirements of the region at a time when the government education infrastructure had collapsed under the terrorist threat.

In an effort to involve the youth in gainful and constructive activity, the army has also established a number of youth employment guidance nodes which provide the young boys and girls’ information and awareness regarding employment opportunities available to them. Vocational training centres have also been set up to train to the local youth, particularly girls, in a trade of their choice. In these centres, the teachers employed hail from amongst the local population, making them more acceptable to the people in addition to creating more employment.

The army is also making efforts to bring the state into the mainstream of the country’s growth trajectory. Education and motivational tours are organised for students to expose them to other parts and people of the country. This helps build on experience, integration, confidence and motivation.

Nobody can understand better than the army as to what the people are going through due to the menace of foreign sponsored terrorism. It is no wonder then that the Army feels it incumbent to reach out to the people of the state in their hour of great distress.

The Indian Army is part of the Unified Command which is chaired by the chief minister of the state and where strategies to counter terrorism and unrest in the state are evolved. Winning hearts and minds of the people who have, for long, remained under the debilitating shadow of the gun, is an important prong of this strategy.

The Amy Chief, therefore, has been very forthright and candid in raising the very relevant issue of radicalisation of youth in the Valley. In saying what he said he had only the good of the people and the state in mind.

Anywhere else in the world, a statement of this nature by an Army Chief regarding a state where the security forces are engaged in a fight to the finish with foreign sponsored terrorists, would have galvanised the government into action. In Jammu and Kashmir we have a petty minister with a stung ego making brash irresponsible statements that the inimical local press is gleefully carrying to gain brownie points.

Checking radicalisation of the youth is imperative for the Valley and education has a big role to play in ensuring the same. It is fervently hoped that Chief Minister Mehbooba Mufti will be able to lease in her foot in mouth minister and take serious note of the issue flagged by the Army Chief.