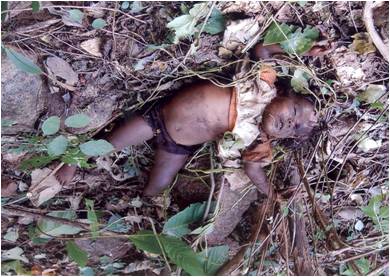 Victims of Naxal violence from the States of Jharkhand, Chhattisgarh, Bihar, Orissa and west Bengal have joined hands in a noble venture to hold a peaceful procession at Jantar Mantar, New Delhi, on the evening of December, 18, in the form of a candle lit vigil and the morning of December, 19, in the form of a Rally. The intention of this venture is to focus the attention of the Nation towards their plight by exposing the atrocities of the Naxals.

In a remote village called Naxalbari in West Bengal, a tribal youth named Bimal Kissan, having obtained a judicial order, went to plough his land on March, 02, 1967. This led to an altercation between the local land lords and the peasants that erupted into violence, leaving in its wake, one police sub inspector and nine Tribals dead. This incident was fully exploited by the communist faction in India to spread a movement through the country that is today termed as Naxalism and Maoism. As the movement gained momentum, Charu Majumdar became the undisputed Naxalite guru. After his death in 1972, the central leadership of CPI (ML) virtually collapsed leading to a number of splits. The movement then got embodied with personal ambitions, narrow perceptions and vested interests.

Over the last 40 years it has succeeded only in the spread of violence amongst the poor and vulnerable tribal population of Orissa, Bihar, Jharkhand, Chhattisgarh, West Bengal, Andhra Pradesh and some other states.

Over the years, the Naxal game plan has changed significantly; Naxal cadres have thrown ideology to the winds and are now behaving like common criminals. They are no longer committed to a socialist, people friendly ideology but are driven by self serving motives. Naxals have escalated violence levels by indulging in heinous actions that expose them as remorseless, fundamentalist and pathological killers who enjoy inflicting misery for no logical purpose. Frequent killings of villagers, using women and children as human shields, harassment of cadre, illegal mining operations, attacks on schools and infrastructure projects and using children as young as six years are commonplace occurrences in their policies. Even the dacoits of days gone by were better since they operated with some principles; the Naxals are totally devoid of any strength of character.

Naxals profess that they are in a situation of conflict with the Indian State. Yet, they have scant regard for internationally accepted rules of conflict. During the late nineteenth and early twentieth century, Nation states initiated a process of universal human rights and created laws governing the conduct of wars and conflicts. The most significant amongst these were the Geneva Conventions that comprise of rules to be applied in times of armed conflict for protection of people who are not or are not taking part in hostilities especially prisoners of war, civilians, medical and religious personnel. The conventions clearly state that such protected persons are entitled, in all circumstances, to respect for their persons, their honour, their family rights, their religious convictions and practices, their manners and customs. Naxals completely disregard these humanitarian conventions. The brutal treatment that they mete out to innocent civilians and personnel of the security forces whom they manage to kidnap and abduct is against all tenets of humanity. Invariably such unfortunate persons are subject to heinous torture and in many instances they have been killed in cold blood even before the negotiation process for their release has been completed. Pre-planned Naxal attacks on villages have left score of unarmed and innocent villagers (Men, women and children) dead, injured and maimed for life. There are many instances when persons working for organisations like the Red Cross or missionaries of different faiths have been killed in cold blood.

The crux of the Naxal game plan is to spread unmitigated terror and a complete sense of insecurity amongst their target segments which are to poor locals and the local Police establishments. To achieve this objective they do not hesitate from wanton killing be it of security force personnel or the poor civilians.

The Naxal hit areas are in urgent need for development; the government is willing to pump in the required funds for buildup of infrastructure but the Naxals are not allowing the flow to be maintained. Almost all development work is being brought to a halt in the interiors of the districts that have a presence of the Naxal menace. The reason behind this strategy is not difficult to comprehend. With lack of development the Naxals can subjugate the poor population and also instill in it an anti-national sentiment. Secondly, inaccessibility due to lack of development facilitates for them safe area to train and hide. Further, the Naxals like to project inaccessible pockets of these tribal regions as liberated zones.

The biggest challenge to this unmitigated violence is coming from the people themselves. The people have realized that Naxalism is the main road block to their progress and prosperity. They are now getting determined to fight for their rights. A large number of Non Government Organisations and other groups have sprung up in Naxal affected areas to evolve a grass root anti-Naxal peaceful movement. Some of these organisations have initiated a noble initiative of sending volunteer victims of Naxal terror to New Delhi for a peace processions to focus national attention onto the barbarity and criminality of this movement.

The initiative by the victims of Naxal atrocity to come to Delhi to sensitize their fellow countrymen to the menace of Naxalism is of great significance. Once the voice of the nation is raised against the Naxals they will lose support and get isolated, the security forces, safe in the knowledge that they have national support will be able to function without restraint and with high morale. It is in this direction that the national anti-Naxal strategy needs to be focused.