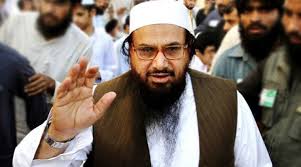 The macabre game plan of Pakistani terrorist Hafiz Saeed is in full swing. His recent release from “House Arrest” by a Pakistani court on grounds of lack of evidence has opened yet another chapter in his already colourful history. It proves that this criminal is not only above the government but also the instrument of law in Pakistan. In that country such an exalted status can come by only through full support of the Army and that, quite evidently, is readily available to him. There is also a distinct possibility that he is now above the army too and has become an institution unto himself, a beyond reproach Frankenstein monster.

“The concept of justice cannot be brutalised and terrorised in the name of fight against terrorism,” said the Court ruling. A very sad statement coming from a pillar of justice for a man whose hands are well known to be soiled with the blood of thousands of innocents across the world and who carries a bounty of $10 million on his head as a global terrorist.

Pakistan had put Saeed under house arrest in January this year to ward of pressure from the US. The release now is yet another slap on the face of the superpower that has, since long, been ignoring Pakistani terror activities directed against India. It is, however, to the credit of the US that it has, in a strongly worded statement, told Pakistan to re-arrest Saeed and charge him for his crimes. Experts, however, believe that this pressure is not going to work and US will land up yet again with egg on its face.

For India the development is very depressing, especially so, since it came a few days before the anniversary of the 26/11 Mumbai terrorist attack which was, beyond doubt, masterminded by Hafiz Saeed. Indian has given to Pakistan sufficient evidence about his involvement; had it been produced in court, the order for release would not have come by and he would have, in fact, been nailed for life. Sadly, Pakistan has refused to acknowledge the evidence let alone work upon it, so we have this unfortunate situation where the criminal is once again scot free to carry on with his nefarious activities.

Hafiz Saeed, on being released, did not waste a single minute in declaring his intention to up the ante of spreading terrorism in Jammu and Kashmir and also the rest of India. He will now go across the country to spread anti-India venom and enhance recruitment in his terrorist cadre.

Saeed has also, through his law firm based in Pakistan, petitioned the United Nations to remove him and his organisation, the Jamaat-ud-Dawa (JUD) from the list of designated terrorists. He was put on the list on December, 10, 2008.

In coordination with the petition filed by Saeed in the United Nations the Prime Minister of Pakistan, Shahid Khaqan Abbasi, has extended to him full support. He has the temerity to state that India has provided “no evidence” against Hafiz Saeed. He has further said that Saeed should be prosecuted internationally if the charges can be substantiated. While making this frivolous statement Abbasi has conveniently ignored that $ 10 million bounty that Saeed carries on his head. Pakistan simply has to stop giving him protection and hand him over to the US, the international case will definitely proceed and he will be prosecuted. Abbasi, with his statement, has followed the well trodden path to ward off the US pressure in the near term, with the hope that it will wither off in time, as it has on many earlier occasions.

The evolving situation is a cause for India to re become more vigilant, but it is not a reason to be too worried. The massive counter terrorist drive that has been conducted in Kashmir this year has left Saeed’s terror outfit, Lashkar-e-Toiba (LeT), virtually dismembered. It has lost its leadership in totality and the few remnants of its cadre are disorganised and demoralised.

Saeed is going full throttle for a recruitment drive because he desperately needs new cadre strength to infiltrate into India. Infiltration, however, is easier said than done. Even the summer months, which are the best time for infiltration, witnessed almost miniscule successful infiltration success in this activity. More than sixty terrorist are reported killed while attempting infiltration, the few who managed to get in did not survive for more than a few days. Now with the winters having set in the degree of difficulty will increase manifold. Saeed will soon realise that walking the talk on his jaundiced diatribe and evil intentions is not going to be easy.

Within Pakistan, Saeed is gaining confidence about his invulnerability by the hour and is planning to extend his power base. There is a likelihood that he may take over the reins of the country as a proxy of the Pakistan army and convert it into an irretrievable fundamentalist Islamic state.

Such a dispensation would definitely pose a threat to India but a larger threat to the world as well. It is so because security forces in India have in place the required systems to counter whatever Saeed is capable of throwing at the country. It is the global community that more vulnerable.

So far as Pakistan is concerned, the best option for the country would be to relent from its self destructive path before it is too late. It should get over its debilitating relationship with India and the need to feed terrorism in Kashmir because of which it is reluctant to touch the likes of Hafiz Saeed and his terror organisations. What the country is not realising is that it is the most threatened with the possibility of being converted into a Muslim fundamentalist state and being thrust back into the medieval ages. Organisations like LeT and JeM and people like Hafiz Saeed are poison for any state and Pakistan is no different.

(Dr. Simrit Kahlon is an academician and a security analyst)