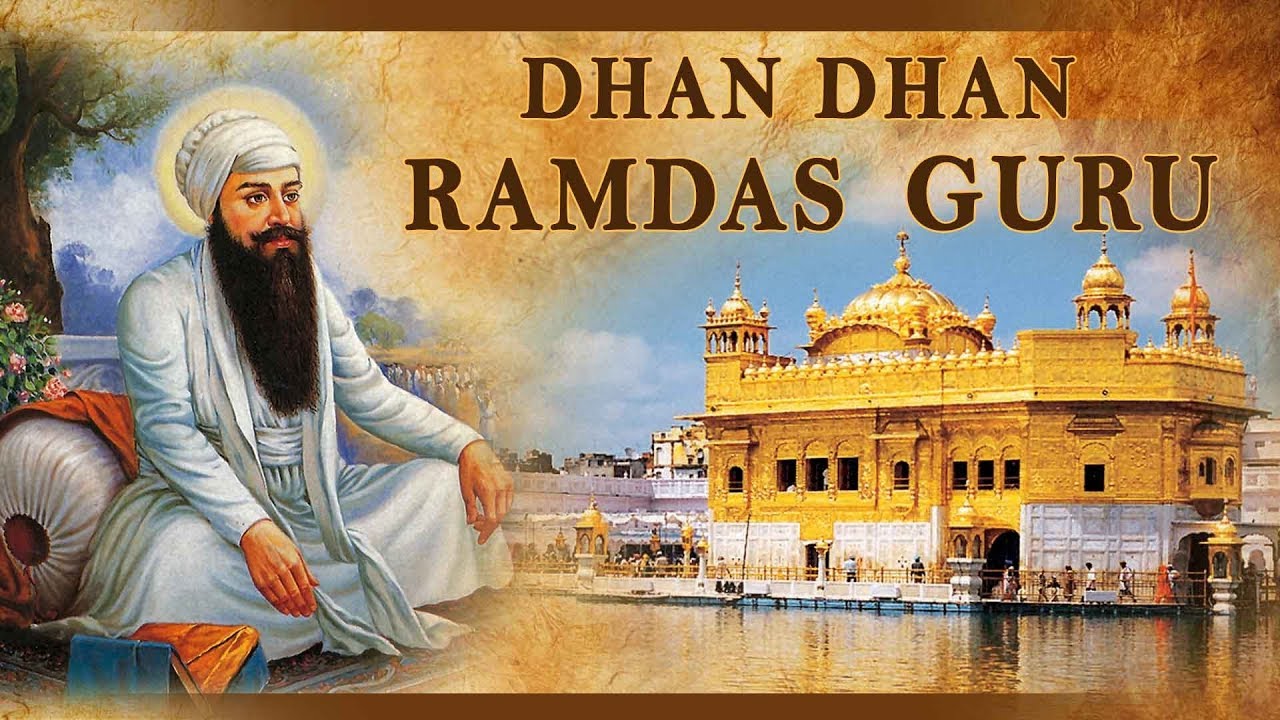 Baba Hari Das and Mata Anup Devi, residents of Chuna Mandi, Lahore (now in Pakistan), and belonging to the Sodhi clan, were blessed with a son on 9 October, 1534. In some chronicles the date is given as 24 September, 1534, coinciding with Kartik Vadi 2nd, (25th Assu) Samvat 1591. They named him Jetha which means first born. His parents, though poor, were pious and spiritually inclined Hindus and he inherited from them the same values.

Young Jetha lost his parents at an early age of seven years and was brought up, under very difficult financial circumstances bordering on extreme poverty, by his maternal grandmother at her native village Basarke, which is also the ancestral village of Guru Amar Das JI. Young Jetha, despite his humble roots, developed a spirit of service and sacrifice with a deep inclination towards spirituality. It was because of his inherent God given qualities that he was chosen, later in life, by Guru Amar Das Ji to become the fourth master of the Sikhs with the name of Guru Ram Das.

It is said that Guru Amar Das Ji visited the house of Jetha to meet his Grandmother and condole the death of her son-in-law (Jetha’s father). While there, he developed a liking for the very young boy. It was at his behest that Jetha and his grandmother went to stay at Goindwal since it has become a bustling township being the religious centre for the Sikhs. Young Jetha at an early age was given, by his grandmother, the task of selling light snacks like boiled Gram or cut vegetables to Sikh pilgrims in Goindwal, to make both ends meet.

Other chronicles tell a different story of the manner in which young Jetha got associated with the Sikhs. It is said that young Jetha, while selling his wares, saw a group of Sikhs reciting Sikh Hymns. He got impressed by them asked them who they were. They told him that they were the Sikhs of Guru Amar Das Ji and were on their way to Goindwal to meet their master. Jetha decided to accompany them to Goindwal where he met Guru Amar Das Ji and became his disciple for life.

Either way, history has it that Jetha came in touch with Guru Amar Das Ji at an early age of 12 years accepted him as Guru and  immersed himself into his service, as also, that of the Sikh community. He did what he was told by the Guru without question and without ego, no work was too small for him and his obedience and dedication was complete.

Guru Amar Das Ji and his family developed a fondness for Bhai Jetha in view of his selfless dedication and spiritual disposition. When the time came for the Guru’s family to search for a suitable match for his daughter Bibi Bhani, both the Guru and his wife Bibi Mansa Devi agreed that Bhai Jetha would be a most appropriate match. Thus a humble orphan became the son-in-law of the third master of the Sikhs on 18 February 1554 when he was a twenty years old.

The couple, Bhai Jetha and Bibi Bhani continued to stay in Goindwal and dedicated themselves to service of the Guru and the community. As time passed a close bond developed between Guru Amar Das Ji and Bhai Jetha.

Bhai Jetha took keen interest in the construction projects that were being undertaken in the bustling town of Goindwal under directions of Guru Amar Das Ji. He was actively involved in the construction of the Baoli Sahib (Sacred Well) that was made to facilitate a holy bath for Sikh pilgrims visiting the holy town to seek blessings from their Guru.

Such was the confidence that Guru Amar Das Ji developed in his son-in-law that he sent the latter as a representative of the Sikhs to the court of Emperor Akbar to defend charges, made by some mischievous elements, about the Sikh teachings maligning both the Hindu religion and Islam. Bhai Jetha answered every query and doubt raised at the Court and convinced Emperor Akbar about the falsity of the allegations. Emperor Akbar was so impressed that he dismissed all charges against Guru Amar Das and the Sikh religion. This incident took place in the late 1560s and played a significant role in short listing of Bhai Jetha in the search for the next Guru.

Guru Amar Das had two sons, Baba Mohan Ji and Baba Mohri Ji. Baba Mohan Ji had an ascetic disposition while Baba Mohri Ji did take took keen interest in the affairs of the community. When the time came to search for the fourth Nanak, Guru Amar Das Ji decided to look beyond his sons as had been the tradition. It is said that he subjected both of his sons-in-law, Bhai Rama and Bhai Jetha to a test.  He asked them to individually make a platform for him and every day he rejected the work done. While Bhai Rama gave up after the third attempt, Bhai Jetha continued trying for seven times. After the seventh unsuccessful attempt he fell on the feet of the Guru and sought forgiveness for not having been able to understand is command and sought blessing to understand the same. The spirit of selfless service shown by Bhai Jetha in the test, as also, his work over many years in the community convinced Guru Amar Das Ji that he was indeed the right choice for the next Nanak.

On 30 August 1574, Guru Amar Das renamed Bhai Jetha as Ram Das (servant of God) and anointed him as the fourth Nanak. The anointment of Guru Ram Das did not meet with any opposition from the family of Guru Amar Das Ji as had been the case earlier with the second as well as the third Nanak.

Baba Sri Chand, the son of Guru Nanak Dev Ji, had initiated a separate religious cult called the Udasis. The sect was ascetic in nature and immersed with Yogic practices.  It was, as such, distinct from the Guru Nanak Dev Ji initiated school of thought that laid down by the concept of “Sikhi.” Sikhi called for taking the name of the almighty while also performing worldly duties. As Guru Ram Das Ji attained the Sikh Guru Gaddi (seat of the Sikh Guru) Baba Sri Chand, now advanced in age and a great Yogi said to be living only on air came to meet him and see how the Sikhi sect of his holy father was progressing.

Immediately on meeting Guru Ram Das Ji, Baba Sri Chand enquired from him as to why he had grown such a long beard. In utter humility and reverence to a Yogi of great accomplishment and also the son of Guru Nanak Dev Ji, Guru Ram Das replied, “To wipe the dust off the feet of holy men like yourself” and then he proceeded to wipe the feet of Baba Sri Chand with his beard. This supreme act of humility gave rise to emotions in Baba Sri Chand, he blessed the Guru and left with the conviction that the Sikh religion initiated by his holy father was in the hands of capable Gurus who were spiritually enlightened and at the same time humble and dedicated to the concept of “Sewa” (Service to humanity)

During his lifetime, Guru Amar Das Ji had tasked Guru Ram Das (then Bhai Jetha) to begin construction of another city for the Sikh community and build in it a great Sarovar (water tank). In total obedience to his Guru, Bhai Jetha, in 1564, purchased land from the Zamindars (Land Lords) of the villages Tung, Gilwali and Gumtala, and began digging of Santokhsar and the Amritsar Sarovar.

On attaining the Guru Gaddi, Guru Ram Das pursued the project with great enthusiasm. Pilgrims in great numbers came to assist in the evacuation and construction work. To the well planned city named Ramdaspur the Guru invited traders and craftsmen from fifty two different professions to settle down, thus leading to its rapid expansion. The city soon became a spiritual center for the Sikhs and it later got to be known as Amritsar (pool of nectar). It is today the holiest city of the Sikh religion, where stands the Golden Temple also known as Harmandir Sahib and also Durbar Sahib that was later constructed by the fifth Sikh master, Guru Arjan Dev Ji.

Guru Ram Das Ji, as in the case of the previous three Gurus, worked towards strengthening the Sikh tenets and making the teachings and practices more amenable and easily understandable for the common people. In this context his major contribution came in the composition of the Four Lavans (religious edicts for solemnisation of a marriage).

The Hindu marriage comprises of an elaborate ceremony wherein seven Lavans are taken while circumscribing around a fire. There are many additional rituals and observances. The readings are in Sanskrit language, and thus, a Brahmin is required to conduct the ceremony. Many poor people who had accepted the Sikh religion could not afford the elaborate marriage process nor understand the language. Guru Ram Das simplified the ceremony with the composition of four Lavans in Gurmukhi language that were ordained to be taken while circumscribing a holy scripture. In the present context a couple to be married under Sikh tenets circumscribe the Guru Granth Sahib four times and each time one Lavan composed by Guru Ram Das Ji is read out; Bani from the Anand Sahib composed by Guru Amar Das Ji is also recited. The entire ceremony is called Anand Karaj. Through the Lavans, the Guru decreed that in the Sikh religion marriage would not be a mere contract; it would be merging of two souls in praise and in service of the single Almighty lord.

In some chronicles it is said that Guru Ram Das Ji initiated the system of Masands as a modification to the system of Manji initiated by Guru Amar Das Ji.  “Masands” were designated as diocese representatives of the Guru in different locations. They preached the word of the Guru to his followers and also transmitted to him their offerings. Other chronicles lay down that the first Masand was initiated by Guru Arjan Dev Ji. What is clear is that the Masand system was strengthened by Guru Arjan Dev Ji by introduction of the concept of Dasvand (donating a tent of individual income to the Guru Langar).

Guru Ram Das Ji wrote 638 hymns in 30 ragas, these include 246 Padei, 138 Shloks, 31 Ashtpadis and eight Vars and are a part of Guru Granth Sahib. His message is predominantly one of universal humanity and a life immersed in discipline and humility which he exemplified with his piety, devotion, energy and eloquence. It is said that such was his humility that every evening, in disguise, he went to the abode of such Sikh pilgrims who had come to meet him and washed their feet.

The Guru graced the Guru Gaddi for a very short period of seven years. His contribution to the religion, however, is over a long period as he worked under directions of Guru Amar Das Ji from the tender age of 12. During his lifetime he installed his youngest son, Arjan Dev, as the fifth Nanak and went back to Goindwal from Amritsar to spend his remainder life in meditation. Sadly, he did not live too long and left this earth on Bhadon Sudi 3rd (2nd Assu) Samvat 1638 which translates oon the western calendar as September 1, 1581.