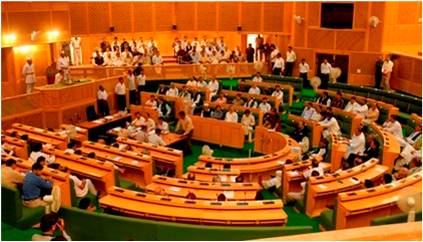 The news about scores of Sarpanches and Panches resigning in North Kashmir under terrorist dikat hogged the media limelight in October and November, 2012. Then there were calls from organisations like all Jammu and Kashmir Panchayat Conference (AJKPC) to boycott polls for four Members of Legislative Council (MLC’s) seats under Panchayat quota scheduled in December, 2012. A similar news appeared in media on November, 24, 2012, which said that over 100 local leaders at the Panchayat and district level had resigned in Gadcharoli district of Maharastra following threats from the maoists. For all those not familiar with Gadcharoli; nearly 30% of Gadcharoli district is under maoist control; it lies in the Dandkaranya special zone committee and it is critical for maoist organisations to display control in the entire area. It goes without saying that efforts of the government to have the Panchayat Raj institutions going in the area is seen as a big threat by the maoists.

The message from these two similar incidents albeit in two different parts of the country is loud and clear. Be it the separatists in Jammu and Kashmir or the maoists in the red corridor or any other such inimical elements elsewhere, the sole aim is to ensure that the government machinery remains defunct. These disruptive elements are fully aware that once power goes in the hands of the people through their elected representatives, they will lose their hold especially in the remote areas and this they cannot allow.

Thankfully, the state of Jammu and Kashmir, where the Panchayat Raj system is still evolving and trying to take roots, has successfully withstood this onslaught of its opponents and is back on track now. This is clearly apparent from the resolve of the Panches and Sarpanches who have rejected the calls to boycott polls and the energy with which both the main political parties of the state i.e. the Congress-NC combine and the PDP have canvassed for the four MLC seats. That the election witnessed an unprecedented turnout of more than 90% and was held in a free and fair environment is yet another feather in the caps of democracy in the region. This also shows the importance that the people attach to such grass root elections and the impact they can have on governance; the successful culmination of the said elections heralded a resounding victory of the people over the cult of the gun and all those who propagate the same.

Although terrorism in the state has been brought below the threshold levels thanks to the sacrifices made by our gallant soldiers of the Indian Army, the Para-military forces and the JK Police, development will only follow once effective governance reaches the grass root level. People in the far flung areas of the state are still suffering due to lack of basic amenities and facilities like health, water supply, power and education. With the Panchayat Raj in place the government now needs to institute measures to strengthen the system by empowering the institutions. Further, the recent successful conduct of elections should give ample motivation to the government to take a plunge towards conducting the Block Development Council (BDC) elections cancelled in October, 2012.

The three tiers of the system once operative and empowered would extend the reach of the civil administration and thereby help identify and resolve the problems of the remote area of the state at the grass root level. Very naturally, there will be roadblocks. Such forces that are aligned against democracy, freedom and the rule of law will try their utmost to scuttle the process. All possible means, especially force and intimidation will be used to ensure that the grass roots devolution of power does not take place. This is because such disruptive forces are well aware that a development of this nature will put the last nail on their coffin.

It is also notable that the constraints faced by the government in this grass roots devolution of power have been blown up by the vested interests through a well orchestrated propaganda campaign. The media and the intelligentsia need to be conscious of this aspect while coming forth with their criticism. What has been achieved is no mean feat and full support of the civil society should be forthcoming to the government to forge ahead. Criticism, where required, should be productive and healthy; options to deal with problems and road blocks should also be forthcoming instead of merely listing the problems.

To some extent, this matter also falls within the purview of the unified command functioning under the chairmanship of the chief minister. The forces would do well to put their internal bickering on hold and concentrate in making this grass roots democracy a success. The lead, of course, has to be taken by the Jammu and Kashmir Police but all necessary assistance, especially in the remote regions, can be provided by the Indian army. This apart, with immediate effect all projects under the army welfare scheme Operation Sadbhavana could be dealt with the Panchayat’s and the BDC’s.

The message to the nation is also loud and clear; the terrorist, insurgents and other disruptive elements are mortally scared of devolution of power to the grass roots. Hence, the best option to remove internal strife is to go for grassroots empowerment whether it is in terrorist hit Jammu and Kashmir, insurgent hit North East or the red corridor. This is crucial in the nations fight against sponsored internal subversion and civil strife; success can be achieved only by the collective resolve of the government and those governed with each in his own way ensuring that progress and development takes place where it is most required. It is here that resilience and determination will win the day for the government, for the nation and for democracy.