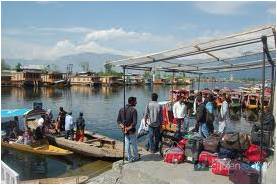 Kashmir is thronging with tourists; air fares have hit the roof, a recent query for going by road led to an advisory to add a few hours to the journey period since the roads a choked with traffic. The situation is likely to become even more chaotic once the Shri Amarnath Yatra begins on June, 25. This is one of the rare occasions when chaos is good news in the Valley. One cannot help feeling relieved and happy for the people of Kashmir who have seen very difficult times since the past few decades. They did not deserve what they got and now that things have started looking up, it is hoped that the good times will not be short lived. A lingering sense of trepidation comes about because the enemy is strong and resolute; he is not likely to give up on his agenda in a hurry and will discover new, innovative methods to keep the pot boiling. The situation, therefore, offers no room for complacency. While surging ahead with the economic boom, one needs to be ever vigilant about the lurking shadows of danger.

It is necessary to understand that a few successful tourist seasons cannot be construed as indicators of lasting, irretrievable peace. It would be impractical to lose sight of the policy adopted, a few years back, by terrorists and their supporters in the Valley to desist from attacking tourists. There were many reasons for adopting this approach; attacks on tourists were generating bad publicity at the international level apart from isolating the local population, which, these merchants of death could not afford; secondly, a good economy generated funds which could be garnered through extortion. As things stand now, extortion has replaced traditional fund generating methods of hawala transactions and counterfeit money as a more viable, better and dependable method for collecting money; it leaves no trace, assists in getting legitimate money from within and weakens the writ of the state on the common man. It is for this reason that enhanced tourism finds an enduring support from the anti-national elements in the valley. Those who are looking at this situation as an indicator of a decreasing graph of violence are living in a very dangerous fool’s paradise.

A better assessment of the security situation can and should be made on the basis of parameters of violence. There is no denying that these parameters are on the decline but a safe threshold is still not in sight. This year itself, according to various sources and data banks, more than 30 terrorists have been killed and 16 apprehended in the state while six brave personnel of the security forces have sacrificed their lives. Terrorist initiated incidents stand at a high figure of more than 30 while about 12 stand-off attacks with improvised explosive devices and grenades have killed two innocent civilians and injured another 36. The biggest of seven infiltration attempts this year took place only a month back on May, 10 in the Uri sector, six terrorists were killed in this operation. Significantly, this infiltration bid took place at a time when the tourist season was just taking off and it took place in a sector which has been dormant for almost two years now. This clearly indicates that no time of the year and no area in the State is free from terrorist threat.

When compared with the parameters of violence of the last two years, this year is showing only a marginal improvement. This implies that the situation is still not at a stage where relaxation in vigilance and operational readiness can be considered. We may have reached the goal post but the goal still needs to be scored.

There are many more issues to be worried about. The growing instability in Pakistan, the continued existence of terrorist training camps along the line of control, the sell-off of Pakistan Occupied Kashmir and Gilgit-Baltistan by Pakistan to China, the stand-off on demilitarisation of Siachen which is definitely going to irk Pakistan and, most likely, result in increased belligerence along the line of control. It is also not worthwhile to bear international or any other kind of pressure on Pakistan to reduce its terrorist footprint in Kashmir; the country is not likely to respond positively. The best option, under the circumstances, is to continue exerting relentless pressure on the terrorists, as hitherto fore, till such time that the menace is not eradicated in totality. This may be difficult but it is not impossible, the crunch lies in maintaining the momentum patiently and relentlessly.

It can be surmised that there is no case to upset the security model and network which has been responsible for bringing about a positive change in Jammu and Kashmir. Let there be no talk of snatching away such powers from the security forces which allow them to function effectively, the time for tinkering with the Armed Forces Special Powers Act has not arrived. There is no case for drastic political upheavals on the misplaced perception that they would lead to more stability. Let there be no talk of breaking bread with the enemy, this is not the right time to negotiate with Pakistan.

What Kashmir is going through is a very critical, very sensitive and very difficult process of consolidation. Something has been achieved but it is still fragile, it has to be nurtured and strengthened before it can fend for its own self. There may be several reasons to be happy about the situation in Jammu and Kashmir, but, there is not one reason to let down the guard in what can be termed as a case of “grandiose exuberance”. This is the time to take small, sensible, practical steps which are directed towards generating a lasting impact on the fast improving situation in the Valley.