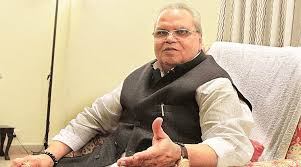 Shri Satya Pal Malik, Governor of Jammu and Kashmir has recently given a couple of interviews to multiple media outlets in which he has articulated the situation in the state. It is quite heartening to see the honest, candid, direct and forthright manner in which he is addressing the many challenges that the state is facing. The deep insight that he has gained is appreciable, especially so in view of the short period of time that he has held the gubernatorial appointment.

The most significant point that the Governor is making is engagement of the youth in the trouble torn Kashmir Valley. He holds the conviction, like many other intellectuals and analysts including this columnist, that the youth are being indoctrinated and misled at the behest of inimical foreign forces. He is emphatic about the relevance of the younger generation in the scheme of things and the need to involve them in the affairs of the state. He speaks of giving a boost to sports including the construction of a world class cricket stadium in Kashmir and creation of an IPL team for the state. His government also proposes to institute liaison officers to assist students studying in other state of the country and ensure that their problems are addressed.

The Governor is equally categorical in denouncing illegal and anti-national activities like stone pelting, disruption of normal life and unmitigated violence that some sections of the youth are indulging in. He said that such activities, especially stone pelting, will be punished under law without any recourse to amnesty. He fully supports the views expressed by the Indian Army Chief, General Bipin Rawat, on the subject and said that the forces have been given a free hand in the conduct of counter-terrorist operations in the state.

An Indian Army soldier has recently been killed in an incident of stone pelting and in this context the Army Chief reiterated his demand that stone-pelters be termed as Over Ground Workers (OGW’s). “I again say that stone pelters should be treated like OGWs. The deceased (soldier who died due to stone pelting) was just guarding the convoy of soldiers who were given the task of building roads and bridges. Every time the army keeps quite and bears the pain but this time we have filed an FIR against the stone pelters. A strict action should be taken against them,” said General Rawat.

It becomes pertinent here to quote a Face Book message by a retired Army Officer, General G.D. Bakshi, in which he has accused the Governor of interference in operational matters of the security forces. “Today stone palters are killing our soldiers with impunity because in the new Governors dispensation the Army is not being allowed to fire back,” he said in his Face Book Post. The provocative statement made by Bakshi is contrary to what the Governor has stated on the subject. Such observations made without the required degree of responsibility can have far reaching negative consequences. It would be advisable for the Governor’s office to contact the retired General Officer and ask him the source of his information and contest the same legally.

The Governor has admitted to a spike in the stone-pelting activity as also recruitment of locals into the fold of terrorism. He has blamed Pakistan for engineering this dissension due to pressure being faced in the wake of the receding trend of terrorism and violence. He has expressed the resolve of the government to do everything possible to soothe feelings and hinted on the use of advertisements for the purpose.

Responding to a query on opening avenues of dialogue with Pakistan and other so-called “stakeholders” in Kashmir Governor Malik, very rightly, endorsed the amenability of the Union Government for internal dialogue within the frame work of the Constitution. He called upon the Hurriyat to remove the “backpack” of Pakistan to enter into the dialogue process. Dismissing any talks with Pakistan he said that the country is not a stakeholder in Kashmir and as such need not be engaged. He added that the younger generation of Kashmir has no faith in Pakistan; it is, instead, looking for a larger and independent Muslim Caliphate. Such a political dispensation is not in the realm of reality and hence the need to educate the youngsters about the futility of the cause.

The Governor admitted to corrupt practices being rampant in the state and also gave some examples. These examples have been picked up by the media as central topics in its sensationalist coverage! It is a well known fact that corruption in Jammu and Kashmir has been institutionalised since many decades. The media’s selective interest in this particular aspect while ignoring the larger issues amounts to “missing the woods for the trees.” The Governor having expressed such strong views on the subject will, undoubtedly, go in for a crackdown for which indications are already visible. This is as far as the issue needs to be stretched.

The interview by Governor Satya Pal Malik has elicited a rabid trolling reaction on Face Book and other social media outlets. It is well known that such trolling is done by an army of propagandists that Pakistan has hired for the purpose. The more the trolling the better since it indicates a sense of despair among the enemies of the state in foreign lands.

It becomes evident from the interview that Governor Malik is firmly in control of the situation and has no doubts whatsoever about what is required to be done in execution of his sensitive mandate. His articulation is logical and righteous while being nationalist. He is ready to take all steps required to get the people out of the shadow of the gun and usher an era of peace and prosperity. In so doing, however, he is unwilling to allow criminal and anti-national activities that jeopardise law and order and national sovereignty. His is a just and honourable approach which should be responded to in a positive manner. Enough blood has been spilled in Kashmir for no purpose; any opportunity to bring closure to the cycle of violence should be grabbed.