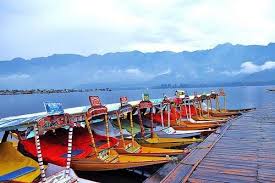 Two factions of the Hurriyat Conference and the Jammu and Kashmir Liberation Front (JKLF), created quite a furore on December, 7, last year by inviting tourists and pilgrims to visit the Kashmir Valley. This was followed by a similar invite from Chief Minister Mehbooba Mufti on December, 10, wherein she asserted that there is no safer place for tourists than Jammu and Kashmir, and especially so, for women.

Mehbooba has also been proactive in attempting to attract investment into the state. A few months earlier on March, 17, she addressed prominent captains of Indian industry and urged them to invest in her state. She received a positive response with Mahindra & Mahindra Resorts who expressed a desire to venture into the tourism sector while ESSAR expressed interest in opening a call centre over there; Reliance group also held discussions on possible business initiatives.

An appeal by the chief minister to the Indian film industry to renew its connection with the Kashmir Valley elicited a very positive response from big actors and producers alike.

It is a terrible misfortune that the extraordinary desire of the people of the country to reach out to their fellow citizens in Jammu and Kashmir, especially so the Kashmir Valley, has been negated by the illegal and immoral acts of a few persons.

Kashmir can now look forward to a lacklustre tourist season because of the turmoil of the last month or so. Mehbooba talks of Kashmir hospitality but what the world sees is goons hitting out at soldiers of their country in the most disgusting manner. Who would like to visit Kashmir after seeing such images?

At this stage when the valley should be gearing up for the tourist season it is involved in a debilitating social media warfare full of hatred and acrimony.

The situation over there would have also put a lid on any initiatives that the business houses were looking at.
The Hurriyat invite was termed as “hypocrisy” by senior BJP leader Ram Madhav. “If they want tourists, they should first ensure peace, absence of which is the biggest hurdle in bringing back normalcy in the state,” he said.

Today, his words come across as prophetic. In the last three months, events have been built up and propelled in a direction which can spell nothing other than economic disaster for the people of Kashmir.

The responsibility for the adverse situation in Kashmir is being put squarely on the shoulders of the Government at the centre and the security forces. The state is being labeled as a human rights violator and those who come from nowhere with stones to attack the instruments of the state charged with maintaining law and order as “innocents.”

What is being conveniently ignored in this irrational and biased charge is that the Government of India has gone to the extent of putting their own security personnel at grave risk, simply to reach out to the young boys despite their blatant indulgence in unlawful and anti-national activity. There would be no precedent of this nature available anywhere in the world.

There is no end to the inanities thrown towards the government as advice to resolve the issue. Some of them runs like this – measures taken by the government are half hearted and not in concert with the ground reality; there is no political machinery in place to engage the stake holders; government is attempting to rob the state of its legal and constitutional rights; government has failed to take any political initiative to arrest the sharp descent into chaos.
This free advice is purely academic in nature. It gives no concrete input on the “ground reality” or the “political machinery” that needs to be put in place to “engage the stake holders.”

The political strategy of Kashmiri leaders is based on instigating the people towards disorder, disruption and agitation against the Indian Union for political gains. So now when the National Conference is out of power, it is making stringent calls against the central government as the Peoples Democratic Party did when it was out of power.
All political establishments in Kashmir have demands of their own – autonomy, self rule, Azaadi et al. To side one would put the other onto the path of agitation; how can the government move forward under such circumstances?

The much touted ground reality is that the political leaders in Kashmir are taking the people for a ride. It is only if the people realise that they are being manipulated in the most unspeakable manner that the window for corrective action will open, otherwise, the Government of India will remain the prime villain for not taking “initiative.”

Most importantly – who are the stake holders in Kashmir? The manner in which the local political establishment, both separatist and mainstream, has forsaken responsibility gives an impression that the only stake holders left in the Kashmir Valley are the young stone pelting boys and with them the government can hold no meaningful dialogue whatsoever.

For the youth there is only one coherent message. If they wish to become great scientists, sports persons, movie stars and the works, the first step would be to remain aligned with a large democratic country like India. Independence or alignment with Pakistan will definitely put paid to such ambitions and a lot more. It is up to the parents to drive home this “undisputed ground reality” into the minds of their wayward children. What is staring at them is total anarchy, economic ruin and a wasted life if they do not relent from their stupidity.

The mother of all “ground realities” is that a few more tourist seasons down the drain and a few more business houses retracting from investment in the State and it will be curtains for the Kashmir Valley. There is still time to go for a course correction. Well wishers of the Kashmir people fervently hope that good sense will prevail.