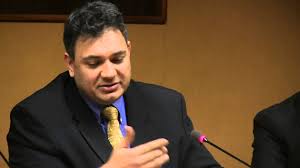 Gilgit-Baltistan is a part of the Indian state of Jammu and Kashmir that has been under forcible occupation of Pakistan since independence. For decades the region has been exploited under the garb of being a “disputed territory.”

Successive governments in Pakistan, regardless of the party in power and even the dictatorships, have followed a policy of exploiting the resources rich region without giving even a pittance in return.

The protests of the people of Gilgit-Baltistan do not constitute a problem since they have, for long, been isolated from the rest of the world. Their numbers are small and as such insignificant. Being Shias, they are being subjected to racial discrimination and terrorism by the majority Sunnis while the state looks on as a bystander.

If a voice is alive somewhat it is because of a few expatriates, living in Europe and the United States, who have dedicated their lives to the cause of their people. They are relentless in their pursuit to bring to the notice of the world the plight of their people.

Prominent among these exiled patriots of the land is Senge Hasnan Sering. Born in the Shigar Valley of Gilgit-Baltistan, Senge is an engineer by profession. In his early days he did research work for the Aga Khan Foundation and is now director of the Washington-based Gilgit-Baltistan National Congress. He has visited India a few times on the invitation of think tanks and associations and has attempted to create awareness about the sad plight of his people over here.

He is indefatigable in his pursuit to spread a similar awareness in the United Nations and among the more prominent nations of the world, especially, the United States and European Union.

On May 11 2016, Senge Sering got an opportunity to speak to an august audience of US Senators on the occasion of the Vietnam Human Rights Day. The event was sponsored by a few senators led by Senator Tim Kaine and held at the Hart Senate Office Building in Washington DC.

Senge began his address by rendering full support to the spirit of democracy of the people of Vietnam and honouring the dedication and sacrifice of rights activists, such as Dr. Que Dan Nguyen. He said that Vietnam’s efforts towards evolving as a democratic and just nation are being challenged by censorship of speech, print and public demonstrations.

Senge went on to draw a parallel between the treatment of minorities in Vietnam with Pakistan’s oppression of the people of Gilgit-Baltistan.

While emphasising that the UNSC Resolution 47 declares Pakistan an occupier and aggressor in Gilgit-Baltistan, he quoted a Freedom House report which has concluded that Gilgit-Baltistan is not free.

The 2015 report on World Freedom, according to Senge, has noted severe restrictions on freedom of speech, assembly and association in Gilgit-Baltistan. Journalists face persecution for speaking against the government and many local publications have been banned. Government curbs speech on subjects pertaining to the armed forces and judiciary. The police, the military, and the intelligence services enjoy impunity for indiscriminate and excessive use of force.

In July 2014, Pakistani parliament expanded the already significant power of law enforcement agencies. Now the authorities can detain anyone without due process of law, engage in electronic surveillance, conduct search and seizures, and use military force wherever deemed necessary. As a result, freedom fighters and activists are being subjected to arbitrary arrests, torture and deaths while in custody.

In 2014, 12 political activists in Gilgit-Baltistan were sentenced to life imprisonment under the country’s anti-terrorism laws for speaking out for local rights. Local leaders such as Baba Jan, Iftikhar Hussain, Mumtaz Nagri, Qayum Balawar, Tahir Ali and DJ Mathal are facing terrorism charges for demanding the just rights for their people and for challenging Pakistani rule. Military and intelligence agencies have seized thousands of acres of private land resulting in the displacement of locals and a state sanctioned demographic change.

In yet another serious development during the last few years, fundamentalist organisations have established their presence in the region. They are targeting the indigenous Shia population and blatantly working towards affecting a change in the demographic change by settling Pathans and Pushtuns over there. Senge has specially referred to this emerging threat in his address.

Those spreading misinformation about Indian Army being oppressive in Kashmir should see what is happening in Gilgit-Baltistan to understand what oppression actually means and implies.

Whether the courageous voice of Senge Sering reaches the corridors of power in Washington or not, India must sit up and pay attention. An inability to do so will open the flood gates for occupation of the region by China along with Pakistan. It will also constitute a breach of trust with a people whom the country counts as its own.

By involving China, Pakistan is making the country a part of the Kashmir dispute, something that India needs to be wary of.  This move by Pakistan will have implications of instability in the entire South Asian region.

India should insist on greater accessibility to the region and its people. If India has given a free hand to Pakistan to engage with separatists like the Hurriyat Conference, it would not be out of place to demand reciprocation from Pakistan, not only with respect to Gilgit-Baltistan but Pakistan Occupied Kashmir (POK) .