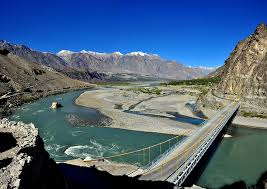 Gilgit-Baltistan is a part of the Indian state of Jammu and Kashmir that has been under forceful occupation of Pakistan since independence. For decades the region has been exploited under the garb of being a “disputed territory.”Now suddenly Pakistan is in a tearing hurry to mention the region, by name, in the country’s Constitution, bringing it one step closer to being fully absorbed as an additional province of the nation. Gilgit-Baltistan will also, for the first time, send two law makers to the federal parliament but only with observer status.

This move has not come by due to any qualms of conscience on the part of the Government of Pakistan. It is a necessity to take forward the China Pakistan Economic corridor (CPEC), heralded to be the ultimate saviour of the dwindling and defunct economy of the country.

The so-called messianic scheme is all set to take off but for a small hitch -the main corridor and lifeline of the project, from Kasghar the westernmost city of China to the Gawadar port in Baluchistan will pass through the disputed territories of Gilgit-Baltistan.

It is only natural that China, while already taking a huge risk in investing 48 billion USD in a country like Pakistan, would not like add to the insecurity by basing the project on disputed territory.

The Government of Pakistan is, therefore, under great pressure from it’s to be benefactor to resolve the status of the disputed territory before the project is launched in earnest.

The people of the region are totally against such a dispensation but the Government of Pakistan is unlikely to consider this sentiment while putting in place its diabolic plan. These hapless people have been subjugated, exploited and suppressed for the last nearly seven decades by Pakistan; one more injustice to them is not an issue of morality and righteousness that would give the political leadership of the country any sleepless nights.

In fact, this is one aspect in which there will be no difference of opinion among the political parties of Pakistan, because, all of them are likely to benefit tremendously from the largesse that will accrue once CPEC is in place.

Traditionally, successive governments in Pakistan, regardless of the party in power and even the dictatorships have followed a universal policy of exploiting the rich resources of Gilgit-Baltistan and not giving even a pittance in return.

The protests of the people of Gilgit-Baltistan also do not constitute a problem since they have, for long, been isolated from the rest of the world. Their numbers are small and as such insignificant; being Shias, they are being subject to racial discrimination and terrorism by the majority Sunnis while the state looks on as a bystander.

There is no worthwhile media presence in the region whereby their problem could be projected to the world; a few of the community living in Europe and the United States have been attempting to project the cause of their people at the United Nations and other such international forums but it is simply not sufficient to bring about any change in the policies of the Government of Pakistan.

Over the years there has been blatant exploitation of the region that abounds with natural resources and minerals. Whether it is construction of dams or mining or the all important communication link with China and the Central Asian Republics, the puppet government installed in the region by the party in power is invariably kept out of the loop.

The locals are not a party to development projects, be it the dams to produce electricity or mining of the rich mineral resources. All contract and leases are given to outsiders including China. China gets its own manpower to work on the projects that it has taken from the government.

Notwithstanding the fact that Gilgit-Baltistan is the gateway of CPEC, it is already becoming apparent that the benefits of the project will bypass the people of the region. Reports suggest that under the ambit of CPEC more than 50 Memorandums of Understanding (MOUs) have already been signed between China and Pakistan for different sectors like energy, infrastructure etc.

Not one penny from this largesse has come the way of Gilgit-Baltistan. All mega projects will bypass the region to be established in Punjab and other provinces of the country, the people of Gilgit-Baltistan are expected only to provide real estate for building of the communication infrastructure like roads and transit points.

There are howls of protest in the region, especially from the restless youth. These are being ignored as usual since they do not form any threat. In case somebody speaks out, he or she is likely to become a victim of a terrorist strike or may be whisked away on charges of being a terrorist, never to be seen again. Naturally, no coverage of the incident will find space in the media.

Those who are being affected by Pakistan evil agenda are citizens of India. India, therefore, cannot sit back and allow all this to happen.  She needs to forcefully contest any such move since it does not reflect the will of the people and is also against all international norms with respect to the Kashmir dispute.