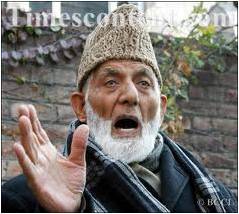 Kashmir’s self proclaimed messiah, Syed Ali Shah Geelani, does not lose a single opportunity of staying in the limelight. When confronted with news of the Fatwa by religious clerics in Pakistan that has declared casting of vote as compulsory under Islamic laws, he has been quick to clarify that an edict of this nature would not apply to the people of Kashmir who, according to him, are under “Indian occupation”. That Geelani has mustered enough courage to go against those who cater for his daily bread and butter is something that comes across as a surprise. The only reason that would come to mind is that he wishes to maintain a balance between what keeps his agenda moving in the valley and what is happening in Pakistan. With clever manipulation of words he has given a clean chit to the democratic process in Pakistan while opposing the same in his own land. He has a very pressing reason to come out in the open with this opposition. With elections in Jammu and Kashmir just a year away, it is singing of the boycott tune that will provide to him the best platform to stay afloat. This topic has the potential of catching the attention of the media and that is what he requires to demonstrate his relevance to his masters in foreign lands.

While following this party line Geelani is, very conveniently, sidelining the fact that Jammu and Kashmir is an integral part of one of the most vibrant democracies in the world. Elections over here are held in a free and fair manner with energetic and voluntary participation by the people. In fact, the people of Jammu and Kashmir come across as one of the most mature and evolved electorate in the country. They have exercised their vote despite threats to their lives from terrorists working at the behest of a inimical forces. They have followed a voting pattern that has brought in change in governments in a manner that exemplifies the true essence of democracy. They have clearly demonstrated their deep knowledge and faith in the democratic process.

There is, of course, no reason to take Geelani seriously. Time and again he has come up with this election boycott call and in every instance the people have disdainfully disregarded the same. Even during the parliamentary election in 2009 he was the first to call for a boycott along with Syed Sallah-ud-Din. He went to the extent of calling for a general strike on the days of the elections. Despite his machinations and negative politics, peaceful polling with a high average voter turnout marked the first phase of the elections in Jammu (51%), Rajouri (49%), Poonch (47%) and Samba (47%). Never known to give up easily, Geelani then turned his attention to Udhampur and issued a fervent appeal to its people to cut across religious lines and heed his call for a boycott. The constituency responded by registering a healthy 44% turnout on April, 24, 2009. The other constituencies that went to poll on the same day also did rather well with voter turnout registered at 55% in Kishtwar, 42% in Inderwal and 33% in Ramban and Banihal

Successful polling caused desperation in Geelani’s camp and anti poll protests in Srinagar were increased to intimidate the public into staying away from the polling booths during voting in the Kashmir constituencies. The people gave a befitting reply by coming out to vote in the first phase of polling at Anantnag on April, 30, 2009. The turnout stood at 26% which was up significantly from the 15.04 % registered in 2004. The Srinagar constituency which is the most sensitive and where Geelani had applied maximum pressure recorded an overall polling of more than 24%. In fact, the polling in the rural segments like Chrar-e-Shariff (56%), Khansahib, Chadoors, Kangan (44%), Ganderbal (34%) and Budgam was very healthy and the overall percentage went down due to insignificant polling in a few segments like Habbakadal, Hazratbal, Amirakadal, Khanyar and Idgah that form the urban hub of the constituency. Even a grenade attacks carried out an evening before did not deter the determined voters from exercising their franchise.

While India can sit easy Pakistan has much to worry about from the abrasive line being adopted by Geelani. The moderate society in Pakistan is striving very hard to leave fundamentalism behind and embrace democracy. An elected government has completed its term for the first time in the history of the Nation; now elections are being held despite a terrible amount of violence and bloodshed perpetrated by various militant groups. It is very sad to note that people like Geelani, instead of welcoming the change for the better, are bent upon doing in Kashmir exactly what the people of Pakistan are trying to undo in their own country.

It would not be very wrong to suggest that Geelani’s policies no longer reflect the voice of the people of Pakistan; they are more aligned to the fundamentalist, militant philosophy as represented by the Tehrik-e-Taliban Pakistan and other such groups. He often talks about coeducation being an “immoral” activity and observance of “Purdah” by Muslim women personifying dignity and self respect. Radical norms of this nature are not applied in Pakistan also and yet he wants them in Kashmir!! Such edicts would push the region back to the middle ages but this is something that Geelani is not bothered about; his is a clear cut case of using religion for the sake of political survival as is done by most dictators and despots. The sad part is that militant organizations derive support from the likes of Geelani and this is not in the interest of his only ally – Pakistan. Geelani has now become a threat to the progressive aspirations of Pakistan and, as such, he is now as much an enemy of Pakistan as he is of the people of Kashmir.