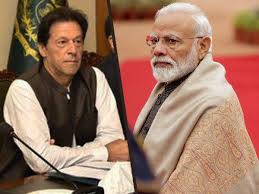 Getting India to smoke the peace pipe seems to have become a crusade of sorts for Pakistani Prime Minister, Imran Khan. Twice in a period of two weeks, the premier of Pakistan has made an offer for resumption of talks between the two countries. On 26, May, when the massive mandate for the BJP  and allies heralded the second term for Modi, Imran Khan called to congratulate him and also expressed a  desire to work with him towards, “advancing the objective of peace, progress, and prosperity in South Asia.” Prime Minister Modi graciously accepted the felicitations but his government’s response to the talks offer came in the form of the by now famous snub of not extending an invite to Khan for the swearing in ceremony.

An aggressive sportsman to the core, Imran Khan cannot be expected to accept defeat so easily. He shot off a letter to Prime Minister Modi on Friday, 07, June in which he said that  Islamabad wants talks with New Delhi to resolve all reconcilable problems, including Kashmir. Earlier in the day, Pakistan foreign minister Shah Mehmood Qureshi also wrote to his Indian counterpart, S Jaishankar, on similar lines. These letters came a day after India rejected the possibility of a bilateral meeting between the two leaders on the sidelines of the Shanghai Cooperation Organisation (SCO) summit in Bishkek, Kyrgyzstan. Predictably, India has rejected Pakistan’s second offer for talks too, maintaining that terror and talks cannot go together.

Both initiatives have been, most assiduously, leaked to the media. Obviously, the mandarins of Pakistan were not too confident of a positive response from India. Leaking of the communication has exhibited their intent to gain some brownie points with the international diplomatic community by projecting themselves as open minded and gracious statesmen ever ready to take the first step towards reconciliation.

Another big reason for the Pakistani premier wearing this peace cap is the upcoming meeting of the Financial Action Task Force. This task force aims to combat money laundering by terrorist organizations and to be named in it entails losing aid from the World Bank and international donor entities. As things stand it does not look as if the efforts being made will be enough to bail Pakistan out and it will end up prominently in the list of defaulting countries. The letter to the India premier may well be a desperate attempt to set things right.

A befitting response to the duplicitous games being played by Pakistan has come from the US. The White House has stated most bluntly that the onus for sustained peace in South Asia was on it and it can be done by putting the terror groups out of business. The US clearly wants Pakistan to crack down strongly and visibly upon such fundamentalist militant groups that continue to move around freely with high caliber weapons and are known to attempt infiltration into the Indian territories of Kashmir with the intention of carrying out terrorist activities “We have always agreed that the underlying causes of the tensions between India and Pakistan needed to be addressed and the underlying tension has been the role of terrorist forces that have sanctuary on Pakistani soil,” a White House official is reported to have stated on the subject.

The frustration being felt by Pakistan due to this summary rejection of its tomfoolery has found a vent in the Express Tribune, a Pakistan daily newspaper that is known to toe the government line. In a scathing attack against India, an editorial of the newspaper states, “Despite having a clear mandate after his landslide election win, Modi seems increasingly uninterested in doing something that would be in the interest of India, Pakistan and the world — mostly because it would go against his brand of Hindu nationalism around a muscular defence of national security, and would infuriate his far-right base. Maybe India doesn’t feel that now is the time to make peace. But the Pulwama experience should serve as a reminder that at some point, the finger-wagging has to stop.” This editorial is the true summary of how the country and its government actually look at the Modi government; everything else is posturing and playing to the gallery.

The response from the White House indicates that the world in general and the western nations in particular are fast gaining an impression that terrorist strikes, by and large, have a signature of Pakistan in some form or the other and India is facing maximum brunt of this evil design.

The disgust being felt by the world is palpable from many other actions being taken on ground. It is well known that the relationship between Pakistan and the US is no longer as cozy as it used to be. The US has cut down substantially on the aid being provided to Pakistan.

Pakistan does make some weak attempts to remove the stigma of the terror charge. It has kept some known terrorists like Hafiz Saeed under house arrest and has also made a big show of freezing accounts of suspected terrorists and their organisations. Its efforts however are cosmetic and not convincing at all.

The best option for Pakistan would be to relent from its self destructive path before it is too late. There is only one factor that is coming in its way from doing so and that is the debilitating relationship with India and the need to feed terrorism in Kashmir. It is reluctant to touch many terrorist organisations operating on its soil that deals with Kashmir. Despite international pressure, terror outfits like the Lashkar-e-Toiba and Jaish-e-Mohammad continue to prosper with relative ease. They have a huge base and adequate generation of funds to maintain themselves. Terrorists come from the same stock, they do not differentiate between the Lashkar and the Taliban; so when the Lashkar prospers the Taliban too prospers and thus the cycle goes on.

The sooner Pakistan realises that it’s double dealing policy severely constraints any honest effort towards addressing the challenge of terrorism the better would be its chances of tackling the same and getting on to the negotiating table with India. It now remains to be seen if Pakistan can read the writing on the wall and mend its ways before it is too late.

(Jaibans Singh is a security expert, columnist and author)