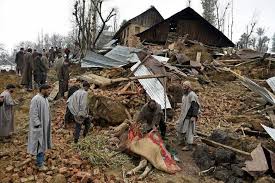 The recent flood scare, landslides and sinking of houses in the Jammu and Kashmir have established a clear-cut governance agenda for the Bhatariya Janata Party (BJP) – Peoples Democratic Party (PDP) coalition government.

The new coalition government has been functional for more than a month now. The people were quite fed up by the slow process of negotiations to work out the coalition. Those who had suffered immense damage during the September, 2014, floods were eager to have a government in place at the earliest so that the rehabilitation process could be initiated to put an end to their suffering.

Even after the much awaited government took oath, Chief Minister Mufti Mohammad Sayeed caused distress to the people by concentrating on appeasement of the separatist and militant forces instead of getting a hold over the key issues of governance. By so doing he engineered speculation about the capability of the coalition to survive and caused more political instability.

Naturally, when the challenge of an impending natural calamity hovered over the head of the new government it exhibited a fair degree of helplessness since it had not come to grips with the basics of governance despite being in power for more than a month. The time had been spent in avoidable indulgence in political tomfoolery.

Once again it was the much maligned Indian Army which came to the rescue. The army has, over the years, evolved excellent standard operating procedures to deal with natural calamities in the state of Jammu and Kashmir, especially the Kashmir valley. The humanitarian effort by the Indian army goes beyond the political climate in the state. In this instance, as earlier, columns of the Indian army in concert with the National Disaster Management Force (NDRF) were on standby to face any calamity.

Chef Minister Mufti Mohammad Sayeed was clearly out of his element when he came “on air” to give a statement on the situation. He gave, at best, a weak assurance to the people that everything would soon be under control.

Surprisingly, the chief minister and the media spoke more of the flooding of the Jhelum river and chose to ignore the bigger danger and human loss caused by landslides and sinking of houses in several districts of the state.

Shabir Ahmed Hajam of Village Laden in Chadoora near Srinagar has buried 11 members of his family who died as their house collapsed due to a landslide caused by the heavy rains. Many houses in the general area of Chadoora simply sank due to the loose mud.  The Deputy Commissioner of Budgam made inane conciliatory statements like, “Topography of Chadoora makes it vulnerable to landslides and earth sinking and efforts are on to prevent such incidents.”

The rains took a toll in Dessa area of Doda where a family of seven got buried under a land slide among other causalities. In Poonch more than 100 houses are reported to have collapsed. It was the Indian army that was in the forefront of the rescue and evacuation operations in these areas also.

National Conference and Congress, the main parties in opposition, cleared their conscience by staging a walkout   from the Legislative Council against, “failure of the government to tackle the flood situation.” They made little effort to contribute to the relief effort.

A silver lining came in the form of a quick reaction from the government at the centre. Prime Minsiter Narendra Modi sent Union Minister Mukhtar Abbas Naqvi to the valley to assess the situation. The minister presented to the Prime Minsiter a detailed report in which, apart from immediate relief measures, he has suggested various measures to avoid such a situation in the future. These measures include strengthening the banks of River Jhelum, immediate modernization of the old and weak sewerage system and removal of illegal construction along the river bank and in the traditional flood drains.

The state government had forwarded a proposal to the central government for urgent flood control works in the state. The proposal that has a financial implication of Rs 401 crore has already received a clearance from the Central Water Commission and is now before the Technical Advisory Committee of the Union Ministry of Water Resources.

It is necessary for the state government to pursue flood control measures with utmost urgency. It also needs to look at the problem of landslides and earth sinking that are being caused by environment degradation. For all this it has to go beyond financial assistance from the centre and generate internal resources to the greatest extent possible. All unpopular decisions regarding breaking down of illegal constructions, acquiring land for extensions of the flood plains and adding to the green cover will have to be taken regardless of the political fallout.

It is well known that the centre has, on many earlier occasions under different governments, allotted funds for flood control measure in Srinagar city. It is quite evident that they have not been properly utilised otherwise the situation would not be as grim as it is presently.

The natural calamity is a wake-up call for the new government to carry out a course correction of its priorities. It has to place good governance beyond the redundant ideological and political issues that it is presently dwelling upon. By addressing the problem with all seriousness and in a time bound manner, can prove that it is different from the previous dispensation.