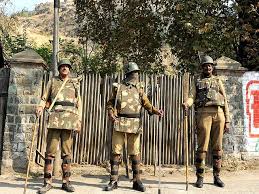 General elections are the flavour of the Indian nation at the moment; not without reason as the largest democracy in the world prepares to keep its tryst with its guiding principles of representative governance. In the state of Jammu and Kashmir the electoral process has a different dimension altogether, the overwhelming desire of the people to participate wholeheartedly is met with the equally sinister determination of a small but powerful force to derail the process.

The forces of disruption in Jammu and Kashmir will resort to every conceivable method to create a situation in the state that would make holding of elections an unacceptable security risk. Increasing the threshold of terrorism; instilling fear among the people by ominous boycott calls; issuing open threats to life and property; causing social disruption through a chain of lockouts and mob frenzy of stone pelting are some of the methods that will be employed to scuttle the elections.

The disruptive forces will also go overboard in trying to create an impression that elections are being held under the shadow of military might. Particular attention will be paid to highlighting perceived human rights violations by security forces and give credence to an aura of repression. The morale of the security forces will be specifically targeted.

The reality on ground, however, puts paid to all such propaganda and misinformation that the disruptive elements will attempt to spread. The fact is that the security forces, under the stewardship of the Indian army, have successfully applied on ground the stated policy of the Nation of “zero tolerance to human rights violations.” It is to the credit of the security forces that no case of human rights violation or collateral damage during anti-terrorist operations has been recorded in the state all through 2013 till date.

Security forces in the state are very conscious of the need to safeguard lives and property of civilians under all circumstances. Anti-terrorist operations are being conducted on the basis of better and timely intelligence that facilitates comprehensive planning for the operation. Maximum thrust is on joint operations of the army, JK police and paramilitary forces with active involvement of the people. Another credible policy involves differentiating between local and foreign terrorists. While all attempts are made to establish contact with the local cadre and motivate them to surrender, the foreign terrorists are hounded to their very end! This policy has increased the confidence levels between the common man and the security forces.

The end result has been a formidable elimination of the terrorist leadership and recovery of huge caches of arms. The people friendly policy in conduct of anti-terrorist operations and the success that has been achieved in application of the same has led to a palpable level of desperation in the terrorists ranks. In order to demonstrate their credibility and capability terrorists have increased the number of attacks but, quite clearly, the sting is missing.

No longer do we have terrorists roaming around with flowing beards, wearing the Pakol (Afghan cap) and carrying an AK-47 with aplomb. The terrorists of today are clean shaven, jean clad, riding a two wheeler with a pistol as a weapon. They are looking for the odd opportunity to target security personnel on duty and make a quick getaway. The idea is to create a media event and garner some publicity to register a presence. These tactics bordering on extreme nervousness will be applied all through the election period.

Unrelenting support is flowing from across the border to further the agenda of disrupting elections in the state. The recent fidayeen attack in the Jammu region provides ample proof of this support. In this particular incident also, terrorists have followed a well established pattern of crossing over and brutally murdering soft targets on the national highway before attacking a military establishment and getting decimated in the process. The fact that those infiltrated applied tactics that bear similarity to the terrorist attacks across Pakistan in Karachi, Peshawar, Quetta etc indicates a similar training module. The derivative points towards the nexus between the Kashmir centric terrorist organisations like Lashkar-e-Toiba and Jaish-e-Mohammad and the Tehreek-e-Taliban Pakistan. No further evidence of the Pakistani blueprint for Jammu and Kashmir during the elections and in the scenario likely to unfold post the US-NATO draw back from Afghanistan is required.

Security during elections will undoubtedly pose the biggest challenge to the electoral process in the state. The fact that divisive forces have been unsuccessful in their machinations earlier will only increase their resolve to make a mark this time round. Security forces in the state are well prepared to meet all challenges that the divisive forces would throw towards them. They have frequently voiced their determination and preparedness to effectively counter all such evil designs. This is a major confidence building factor in the run up to the polls.

Faith and trust within the security forces and the people of the state will continue to be the abiding strength of anti-terrorist operations and management of security in the state. The best response from the government, the people and the security forces will come from the high degree of confidence and trust that marks the environment at the moment. At this crucial juncture there is also a need to ensure continuity. No changes in the present set up would be advisable during the parliamentary elections and onwards to the state assembly elections also. All such officers and functionaries who have been involved in creation of the existing environment should be allowed to steer it to its logical conclusion.

The reinforcing factor, of course, will always remain the abiding belief in democracy that the people of the state hold so close to their hearts.