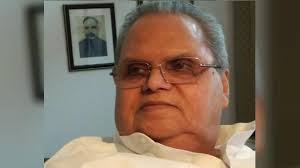 Satya Pal Malik is firmly ensconced on the gubernatorial chair in Jammu and Kashmir! One is in a quandary whether to congratulate him or extend to him good luck for the times ahead. Being appointed Governor is normally a retirement award for good work done. In the case of Malik it is probably the most challenging responsibility that he has taken on in his lifetime.

The President has been pleased to appoint five Governors together in the past few days and it is only the Governor of Jammu and Kashmir who is getting extensive media coverage. Articles are being written, Television talk shows are being conducted, social media is in overdrive! The interest being generated indicates the importance of the post that he has been called upon to hold. Governor Malik can look forward to burning of a lot of mid-night oil and also some astute political tightrope walking that will test his abilities to the core.

A big positive in favour of Malik is his vast experience in the field of politics and his links with a large number of political parties, it t now remains to be seen as to how he leverages the connections. A word of caution here, these connections also have the potential of backfiring as all constituents will vie for his support. This is quite evident by the political posturing that National Conference, Peoples Democratic Party (PDP) and the Congress have resorted to right from the moment of his swearing-in. The moment he goes against one the vitriolic diatribe that is so common in J&K will begin and the sensationalist media will lap it up. In some disgruntled circles he is already being referred to as a stooge of the ruling party.

Malik’s political background is also a big factor! For long there has been a demand for breakup of the bureaucratic stranglehold on the gubernatorial post in Jammu and Kashmir. Many feel that since the issues plaguing the state are political in nature, it would be best for a political personage to spearhead their resolution. Being a pioneer in this direction, it is now up to Malik to prove the efficacy or otherwise of this thought process.

In dealing with the political spectrum, the best approach for Governor Malik would be one that is based on righteousness, keeping the interest of the nation and the people of the state in primary focus.

There are, apart from politics, many major areas that will need the attention of the new Governor. At the crux is the security situation in Kashmir that had deteriorated rapidly under the previous state government.  Terrorists and miscreants were ruling the roost due to complete lack of restraint. The turning point was the murder of the journalist Sujaat Bhukhari and the Army soldier, Aurangzeb. The situation has been controlled to an extent since imposition of Governors rule but continues to remain volatile. The unrest seen at the time of the Governor Malik’s swearing-in is an indicator of the times to come. As administrator, Governor Malik will be required to direct maximum attention towards security. It is something that simply cannot be compromised. Putting it on the sideline to leverage politics can have a devastating fallout.

Putting a plug on the rapid radicalisation and religious fundamentalism being perpetrated in Kashmir by inimical foreign forces yet another sensitive area that will need the attention of the new Governor. It is here that his socialist background will come in handy; he has the experience to take credible initiatives to usher an equitable society with an orientation towards welfare of the common man. One factor that can accrue good results is weaning away the youth from the cult of violence towards gainful activity and employment. In this, the proclivity to give doles will need to be curbed in favour of instilling self reliance and pride among them. Devising a strategy that promotes Sufism and Kashmiriyat as intrinsic parts of the Kashmir civilization, and curbing activities that aim at bringing in alien, fundamentalist religious practices into the region is something that comes in the domain of the Governor even when there is a democratic government in place. Malik can make a big contribution in this direction and the time to start is now!

Press is Kashmir is in danger of being overwhelmed by money power.  A person having cursory knowledge of psychological operations would be able to discern the sophisticated media driven and foreign sponsored propaganda machinery that has been created to influence the thought process of the people of Kashmir. Freedom of expression does not allow curbing the of voices and opinions, what is required as creation of a equal space for the moderate and positive voices also to be heard. The Governor can use his political acumen and a institute a soft power approach to initiate a righteous and nationalist discourse through the media..

The Jammu and Ladakh regions have been given short shrift, leading to festering discontent. Jammu region, especially, is sitting on the tinder box due to unaddressed sensitivities on issues like the Rohingy refugee influx, inadequate attention to plight of border residents due to incessant shelling from across the border and general lack of development initiatives in comparison to Kashmir. There are many other long pending demands like rehabilitation of the West Pakistan refugees and people of the Valmiki Samaj etc. The list is long and quite justified. There is a need to bring about a thought process that looks at the state as a whole and not in parts.

The people have welcomed Governors Rule in the state with a fair degree of relief and happiness. The administration of the Governor will need to put in a lot of effort to first contain the adverse situation and then turn it around to a degree that facilitates holding of elections. However, expectations raised to an unattainable level would be counterproductive and should be avoided. The immediate requirement is to support the new dispensation so that forward movement is possible. All eyes are now on Governor Satya Pal Malik!