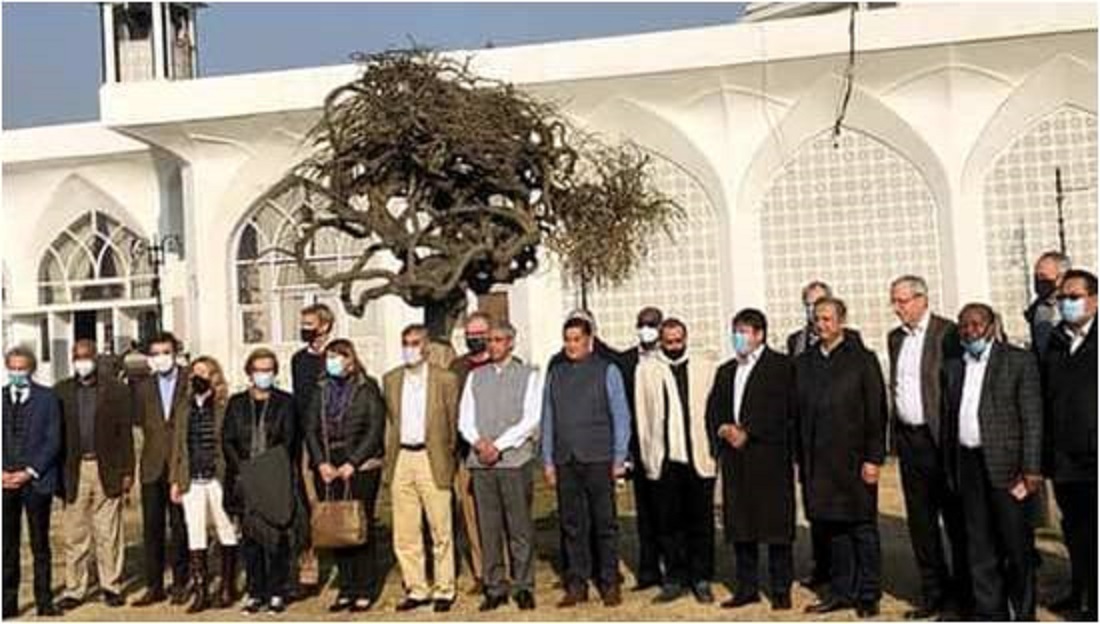 A delegation of European Union envoys visited the Union territory of Jammu and Kashmir on February, 17-18, 2021. Such visits have been organised regularly by the Indian Ministry of External Affairs with the intention of giving to the delegates firsthand information about the situation in the Union Territory, about which many false derogatory rumours are floated by inimical forces.

Post a visit by a delegation in February, 2020, the initiative, sadly, had to be curtailed due to COVID-19 restrictions. It has now resumed as the situation has taken a turn for the better. This group of 24 delegates includes European Union Ambassador Ugo Astuto and Ambassadors of key European states such as French envoy Emmanuel Lenain, Italian envoy Vincenzo de Luca, Swedish envoy Klas Molin, Irish envoy Brendan Ward and Dutch envoy Marten van den Berg.

During earlier visits the delegates had expressed satisfaction about the situation but had recommended early conduct of elections and restoration of communication facilities. Much has changed for the better in Kashmir since then. All those detained due to security consideration have been released, grass root election for the District Development Councils (DDC) and some vacancies in Panchayats and local bodies have been conducted and all communication facilities including 4G connectivity have been restored.

It was against this backdrop that the delegates chose to visit Magam in District Budgam to interact directly with elected DDC and Panchayat members They were briefed by such members  about the people centric schemes being implemented with complete support of the government and also witnessed “Block Diwas,” a public outreach initiative organised every week by the local administration. The envoys left convinced that DDC elections had been conducted in a free and fair manner and the institutions were functioning  autonomously, at par with the best tenets of democracy.

The envoys then interacted with prominent members of civil society at the Sher-e-Kashmir International Conference Centre (SKICC) and updated themselves about the ground situation. This was followed by a visit to the famed Hazratbal Shrine.

Of great significance was a meeting with the heads of security forces operating in Kashmir represented by Lt. General BS Raju, General Officer Commanding of the Kashmir based 15 Corps  with Inspector General of Police, Mr. Vijay Kumar, in attendance.

The briefing included a historical update of the  security dimensions followed by a detailed brief on the current situation along the Line of Control (LOC) and the hinterland. The multi-pronged and integrated approach of the Indian Army and Police in J&K was highlighted.

The envoys posed a number of questions and queries mostly pertaining to the current situation so far as terrorism was concerned. The Corps Commander was candid in his response and said that despite the terrorists estimates reducing to nearly 200, the edifice of Counter Terror operations still requires a grid deployment to ensure security to the citizens residing in the UT. International experiences including in Afghanistan prove the need for boots on ground in Counter Terror operations he explained. It was, however, emphasised that most terror organisations have experienced depletion in their strength with the leadership having been virtually decimated. and as such, security indicators have witnessed a vast improvement. People now are more confident due to the secure environment.

The Corps Commander also drew attention to the propaganda efforts of Pakistan while emphasising that the people of Kashmir had seen through the lies of the cross-border propaganda and are choosing to ignore it. Pakistan , however, refuses to relent from its nefarious activities as is evident from the consistent ceasefire violations aimed at infiltration of fresh terrorist cadre and the desperate attempts to boost local recruitment. The methodologies used to get the misled youth back to the moderate mainstream were explained and an assessment of the success achieved were presented to the envoys.

The commanders of the security forces expressed satisfaction at the manner in which democracy is taking shape at the very grass-roots within the UT which, in turn, is greatly assisting in the positive change being witnessed in the overall security environment. Further progress towards de-radicalisation of youth and weaning the misled local boys away from the path of terrorism , it was opined, would be forthcoming by seamless involvement of civil society, parents and family members, teachers, religious leaders and role models as well as engagement of youth in productive activities. Work in this regard is underway at a very positive scale and results will soon be evident.

The visit was a grand success. The envoys expressed satisfaction at the soft policing being attempted in J&K and the overall improvement in the situation in the aftermath of the deadly CODID -19 challenge as also abrogation of draconian legislations like article 370 and Article 35A. Juan José Cortez Rojas, Charge d Affaires, Embassy of Bolivia in Delhi, lauded the Centre and said, “What we are realising is that democracy took place here. It is impressive.” He also said that people were seen to be happy with the political decisions taken by the central government. The other envoys too echoed his sentiments.

Pakistan sought to portray the visit of the delegation as an effort by India to mislead the world community. “Such guided tours are a smokescreen, aimed at diverting international attention from India’s egregious human rights violations in [Jammu and Kashmir] and creating a false impression of normalcy,” said the Pakistani foreign office in a statement.

The country has followed this diplomatic line ever since this positive initiative has been taken by the Indian Government. It portrays the desperation that the Pakistani establishment is feeling as it sees its fake narrative built in Kashmir slipping out of its hands. The Indian side has, very rightly, chosen to ignore this crazy ranting of the neighbouring country.

Undoubtedly, the Unions Territory of Jammu and Kashmir has witnessed a lot of positive change over the last one year. It is hoped that the momentum will be maintained and the region will soon emerge as an oasis of peace, tranquillity and progress.