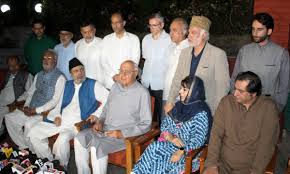 Politicians are known to give weird statements and get away but there is always a limit to it.One such politician is Dr Farooq Abdullah, a sitting member of the Lok Sabha representing Srinagar Parliamentary constituency which he won with just 7% voter turnout in 2019. He is the hereditary president of the National Conference founded by his father late Sheikh Mohammad Abdullah who brilliantly manoeuvred the exile of last ruler of the Dogra Dynasty with full support of then prime minister of India Jawaharlal Nehru. Sheikh wanted the Abdullah dynasty to rule the state thereafter. But for his overriding personal ambition he had almost succeeded in doing that. He was jailed on the orders of his most trusted ally in New Delhi Pandit Nehru for anti-national activities. Once invincible Sheikh remained in jail for 11 years. Soon after his arrest, his successor Bakshi Ghulam Mohammad said this in a radio broadcast, “A fraud was being committed on the interests of the country. The slogan of independence was dangerous. Under the control of an imperialist power an independent Kashmir would have been a serious danger for the people of India.”

67 years later his heir Farooq Abdullah is also treading on the same path only the players have changed. Farooq seems to be enamoured by a revisionist and expansionist China, which has challenged India’s sovereignty in Ladakh. Dr Farooq’s recent statements show his newly developed love for China. The motive and implications of the statements will be discussed subsequently because through these statements he has definitely crossed the Laxman Rekha.

Such anti-national rants from the ‘sharp-witted’ politician are not new. Even in the past he had made many such statements and got away because he was considered indispensable by the powers then. Sometimes his remarks were ignored on the plea that they were made at the heat of the moment during election campaigns and sometimes attributing them to he being a loudmouth. In all fairness readers would need a revision of such rants from Dr Abdullah.

He was the Chief Minister of J&K when then state was slipping into militancy. He as Chief Minister and Home Minister had turned a Nelson’s eye to ongoing arms smuggling and to and for movement of youth across the LoC for arms training. 70 hard core terrorists were released by Farooq Abdullah as reported by India Today between July and December 1989. Detention of several of them was confirmed by the Chief Justice of J&K High Court. And yet he released them. He set the trend for releasing terrorists and later tried to become a preacher on the ill effects of releasing terrorists when Mufti Mohammad Syed’s daughter was kidnapped and also during the release of terrorists during Kandhar Hijacking. Incidentally, one of the released terrorists Daud Khan belonged to Ganderbal, Farooq’s constituency, who became a Deputy Commander of Al-Badr and organised a force of 2500 Kashmiri youth.Prior to that he had visited POJK and shared a platform with Jammu Kashmir Liberation Front (JKLF), a pro-azadi terrorist outfit. He had also allowed Khalistan terrorist groups to train in Jammu.

Farooq was the CM when Kashmiri Pandits were being mercilessly targeted and being forced to leave the Valley. He made no effort to save them. People were forced to set their watches to Pakistan Standard Time, buildings, offices, shops and government establishments were coloured green as a sign of Islamist ruleunder the watch of his government. Open letters, posters, and threats from mosques to the minority communities to quit Kashmir had become daily happenings. “This land is only for Muslims and is the land of Allah. Sikhs and Hindus cannot stay here.” The streets and mosques verberated with slogans like “Zalimo, O Kafiro, Kashmir hamarachhod do”, “Kashmir mein agar rehnahai, Allah-o-Akbar kahnahai”, “Peoples League kakyapaigam, Fateh, Azadiaur Islam”, “Kashirbanawon Pakistan, Batawvaraie, Batneiwsaan” (Will turn Kashmir into Pakistan alongwith Kashmiri Pandit women, but without their men folk). Farooq’s government seemed not only ineffective but with the Muslim extremists. He finally resigned and left Kashmir when it was burning. He left for London. His anti-national mindset can be gauged from his statement published in Times of India dated February 7, 1991, “I directed my partymen to lie low, go across for arms handling, do anything but do not get caught.”

Farooq’s true colours were evident during the campaign for 2014 elections but were ignored as electoral outbursts. After the North-South experiment of running a coalition government in J&K failed with Mehbooba Mufti proving more loyal to the anti-national forces than the nation, Modi government lost no time in showing their proper place to the “mainstream politicians” led by Abdullahs and Muftis. They initially tried their usual tricks of browbeating the central government considering themselves to be a power to be reckoned with in Kashmir. In return they received nothing but cold response which led to their open hatred for Delhi. Senior Abdullah tried to strengthen his base in Kashmir through pro-Pak statements and anti-India rants. His speeches turned blatantly communal. He created an image for himself of a rare politician who is politically incorrect, who never hides but he feels, does not mince words and says it like it is. This helped him get away with many statements which could be termed as bordering against nation’s interests. In order to struggle back from two withering electoral defeats, Farooq regularly began to talk about azadi. His speeches and media bites became belligerent and hostile.

The two back to back electoral defeats became nightmares for the aging Abdullah and he did not want to be recognised in history as the one responsible for extinction of Abdullah Dynasty. This made him belligerent and desperate. On December 6, 2016, while addressing the media at the mausoleum of his late father he did not wink an eyelid while he spoke of azadi and offered support to the Hurriyat. “We will never be free until we are united (against India) and I am asking NC workers not to stay away from the movement,” urging the Hurriyat further  he added, “We are part of the movement: don’t take us your adversaries, we are a part of you. We have fought the jihad. Be united, take this movement forward. Go ahead, we are with you.” He got away with it except for a few condemnations. His party MLA and now a colleague in Lok Sabha shouted “Pakistan Zindabad” on the floor of J&K assembly but he refused to take any action against him. Four years later he has forged unity among five ideologically different political parties, foes till yesterday, in the form of Gupkar Declaration 2020, a new incarnation of defunct Hurriyat.

While campaigning for his parliamentary seat in open defence of militants he said, “If our children are offering sacrifices today, they do not want to become MLAs or MPs or minister. They offer sacrifices for their ‘rights’: this is our land we are its owners.  A new ‘nation’ has been born, which does not fear guns.” His open support for “azadi” was ignored. He even raised questions about deadly Pulwama attack killing 40 brave hearts of CRPF by saying, “Forty CRPF personnel were martyred in Pulwama. I have doubts about that and I am telling you the truth”, thus giving clean chit to Pakistan. He even questioned the veracity of Balakot airstrikes.

His outbursts like “POK tumharebaapkanahi”, “I ask them, first you raise the Tricolour at Lal Chowk in Srinagar. They can’t even do that here and they are talking about POK.” He displayed his pro-Pakistan mindset when Dineshwar Sharma was appointed as the interlocutor and he suggested that he should hold talks with Pakistan as well. Isn’t it surprising that since 2002, many political workers of the NC were targeted by the terrorists but not any leader of the party? Just before the abrogation of 370 in August 2019, Farooq in a threatening statement said, “Kashmir’s relation with India will no longer exist if its special status were to be withdrawn.” Soon after this and after the historic announcements of August 5, 2019 he along with other so-called mainstream politicians was put under house arrest.

Farooq crossed the Rubicon recently when within the span of a few days he made two pro-Chinese statements which were blatantly anti-national. These two statements were not only anti-national but to an extent amounted to legitimising Chinese aggression in Ladakh. His invitation to China to help in reversing the abrogation of 370 amounts to sedition and should be construed as an invitation to an enemy nation to intervene in the internal affairs of our country. Recall how his father was treated by Nehru despite being best of friends. Why should his son be treated differently by a nationalist government firmly in saddle in New Delhi?

With release of Mehbooba Mufti and their frequent interactions the situation in Kashmir is likely to worsen. The Hurriyat is being replaced by the “Gupkaris” (signatories of Gupkar Declarations) with Farooq aiming to replace SAS Gilani and Mehbooba filling the vacuum of Ayesha Andrabi. Any delay or miscalculation by the authorities may have severe consequences on return of peace in Kashmir. Hurriyat was backed by Pakistan alone but the “Gupkaris” are seeking Chinese assistance as well. Enough is enough, act now or repent later.

(The author is a Jammu-based veteran, political commentator and  columnist)