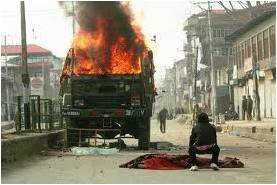 Ten days ago, in the afternoon of Saturday, March, 10, seventeen year old Yasir Ahmed Wani lost his life in an unfortunate accident in the Anantnag region of the Kashmir valley. He came under the front and rear wheels of a military truck

and died on the spot. Almost instantly, a crowd gathered and resorted to violence before setting the truck on fire. The driver of the truck and the soldiers riding with him were rescued by the police. The valley remained tense for a few days after the incident. A case was registered against the driver for negligent driving. Gradually, normalcy returned.

Accidents are not something out of the ordinary in our country. In situations where the terrain is torturous and the weather unpredictable, the likelihood of their occurrence increases manifold. What is remarkable about this case is not the actual accident but the turn that events took afterwards and the manner in which these were reported by the media. The first point to ponder upon is the almost instantaneous appearance of a crowd which acted as judge, jury and prosecutor to hound the hapless driver of the military truck and set government property on fire. This reaction is not seen in hundreds of other fatal accidents that take place in the Valley.

The attempt to gain media attention was also very evident. Across the world such accidents are reported by the media in a routine manner in the inner pages. Interestingly, this incident received wide coverage even in Pakistani newspapers as well as Pakistani sponsored media. Even more remarkable is the manner in which the incident was covered. The stress was not so much on the accident itself or the victim as it was on what followed, that is: an angry mob, burning down of the truck, stone pelting, anti-India and pro-freedom slogans and harsh measures resorted to by the police to disperse the crowds. One particular news site was not even aware of the actual details as they reported the victim’s age as twenty seven instead of seventeen. While balanced news sites reported that the valley was tense following the death of a youth in an accident involving a military vehicle there were sites that reported the news under headings like “Military Truck Crushes Youth under (its) Wheels”. To further add to the pathos of the situation, the youth was described as the sole bread winner of a family which now shall be steeped in abject poverty. Very subtly, thus, the blame of leaving a family wanting for something as basic as food is laid at the doorstep of the Indian Army and the Government of India. For good measure, it was also hinted that the driver was driving the truck while under the influence of liquor by alleging that eye-witnesses reported his having a foul breath. Such coverage has a very obvious pre-decided agenda of leaving an impression that an accident of this nature is deliberate rather than being an unfortunate freak mishap. This is a classic example of yellow journalism.

It is to be noted that this nature of reporting involving the distortion and misrepresentation of facts is not a lone incident. There is, in fact, a visible pattern to such occurrences. A random search on Google will reveal the occurrence of other such accidents and similar reporting by motivated media. The question is how such anti-government protests and motivated yellow journalism coverage are engineered and to what purpose? Why would sections of the media misreport or distort facts while conveying these to the people? What is sought to be achieved by such rabble rousing and misrepresentation? Which are the sections that are likely to benefit from such machinations? There is hardly any doubt that the intention of whoever is dictating such strategy is to create a divide between the State and its denizens in India. The modus operandi being adopted to achieve this end is to carry out a hate campaign against the state agencies and malign them to such an extent that they appear as enemies of the people of Kashmir. It is as if there is a group of people that is constantly waiting and watching for the state agencies, particularly the Indian security forces, to slip up even slightly and they swoop down for the kill.

It is clear that a nefarious plan is afoot to seize any and every opportunity to create a loaded issue out of a neutral occurrence and arouse the emotions of simple people in a manner that misleads them into becoming a party to creation of a tense situation. Thereby, the administration is forced to either take tough measures, which in turn gives further opportunity to vilify the State, or it steps back which projects it in a weak light. The ultimate result of such actions is a diversion of the State from the road to development towards by-lanes of violence, disruption and chaos.

Rabble rousers such as Syed Ali Shah Geelani excel in taking advantage of tragedies at the individual or collective level and mould them to serve a reprehensible end. He and his cohorts have undertaken such exercise regularly in the past; that they did not succeed is another thing altogether. It is important that good sense prevails in the valley at this point in time when the summer, that is the productive season, is just about to approach. The likes of Geelani should be given no opportunity to further their anti-people agendas. The common man needs to be able to see through this web of deceit that the stooges of our enemies across the border are weaving. We need to put our interests before anything else and learn to rise above petty issues, for that is the only way forward.