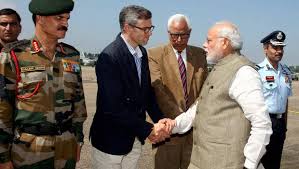 The bugle for elections has been sounded in the state of Jammu and Kashmir. The ruling National Conference had expressed reservations about the timing of the poll but now that a decision to go ahead has been taken, the party has also adopted a vibrant campaigning mode. One would like to believe that National Conference was opposing the polls due to a genuine concern for the flood affected people and not due to political reasons as is being widely perceived.

It is now becoming a trend of sorts for elections in Jammu and Kashmir to be held under testing circumstances. Ahead of the elections held in 2008, the mistimed withdrawal of support for the Congress by its then coalition partner the Peoples Democratic Party (PDP) led to Governors rule in the state. At that stage also the election commission was called upon to take a very difficult decision. It showed tremendous courage in the face of seemingly insurmountable odds when it decided against postponing the elections. Free and fair elections with a record voter turnout were held and the democratically elected government thus installed has now completed its six year tenure successfully.

The decision for the election commission in the current instance also would not have been an easy one. There are multiple problems in holding elections in the state, the main being the tenuous situation caused by the recent floods.

Security is yet another big concern during elections in Jammu and Kashmir. The terror mongers located in Pakistan have been attempting, since long, to boost the terrorist strength and terrorist morale in the state for the specific purpose of scuttling the elections. They have not achieved the degree of success that they were looking for due to the relentless efforts and vigil of the Indian security forces along the line of control as well as in the hinterland. Yet there is need for caution, the available strength of terrorists in the state has the capacity to cause problems in the electoral process.

The separatist groups have already started making the mandatory calls for boycott of the elections. They will try to discredit the poll process at every stage. They are bound to launch an anti-security forces campaign. Rumours of rigging through the use of government machinery will be spread with impunity, also, minor clashes with will be blown out of proportion.

Prime Minister Narendra Modi, during his visit to Siachen and Srinagar in Diwali day got an opportunity to meet with the army commanders in Jammu and Kashmir. Surely, he would have discussed the issue of poll security with them. Apparently, he went back quite convinced that the situation is under control and his confidence has permeated down to the election commission. Also, all political parties except NC are in favour of holding elections on time. These twin factors have played a major role in the decision of the election commission to go ahead with the polls.

The Army in Kashmir is geared up to keep this promise in letter and spirit. The security forces are fully poised to assist the election process. They have been gearing up for this great event for quite some time and are by now ready to face all the challenges that the conduct of free and fair elections can pose upon them. Terrorism is firmly under control and chances of holding a fairly violence free election are very high. The force has the capability of providing all possible assistance to the election commission for ensuring free, fair and unhindered polling in the State, especially in the remote areas.

The army is also giving all possible support to the ongoing efforts to restore the adverse situation caused by the recent floods. The model code of conduct is likely to be relaxed in the state to enable smooth progress of flood relief and rehabilitation. Under these circumstances, all political parties will try to woo the voters with enhanced relief measures. This will give a welcome boost to the rehabilitation process rather than hindering it.  Due to the elections, the infrastructure of political parties that is presently in poor condition will improve at a very fast pace with their headquarters rendering all support. Overall, the poll process may turn out to be a boon for the flood relief work rather than a hindrance.

If Governor’s rule had been promulgated in the state on completion of the term of the incumbent government in January 2015 the momentum of democracy would have broken down. The sterling work done, the difficulty and sacrifice faced over the last decade plus to nurture the same would have come to naught.

A number of steps need to be taken to ensure that false propaganda is not allowed to gain footage now or ever. First, the media should ensure that the situation is presented in the right perspective. Second, a system should be evolved whereby the different security services can be easily distinguished, the best method would be to have different uniforms. This will put paid to the blame game that the separatists are bound to indulge in. Third, political leaders should restrain themselves from making sweeping statements that cannot be justified on ground.

Elections in a vibrant democracy empower the people by bestowing upon them the right to elect their representatives which in turn ensures accountability and transparency in governance. The people of Jammu and Kashmir should welcome early elections and participate with great gusto so that they are empowered as masters of their own destiny. Let the separatists also fight their battle through the well laid down democratic tenets that guide the Indian Nation. The attendant legitimacy will provide to them a better platform to voice their opinions and exhibit their ability to lead their people.

Notwithstanding the problems and the challenges, it can be said with reasonable amount of optimism that this time also the people and the administration will not let down the great democracy of our country and successful election with large voter turnout will be held in Jammu and Kashmir.