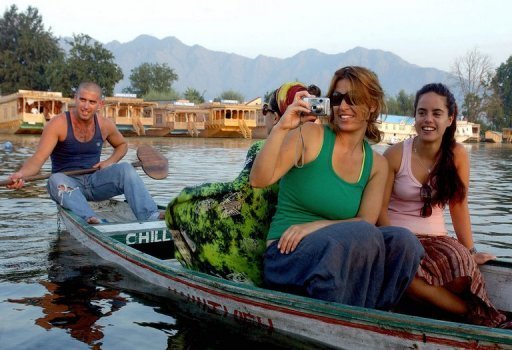 The Kashmir valley is going through a dynamic phase at the moment. For the shopkeepers and the tourism industry this is a “do or die’ time with the tourist season at its peak and pilgrimage to the holy shrine of Shri Amarnath shrine due to begin by the end of this month; for the students this is the time to seek admissions in higher courses and plan their careers; for the security forces this is the time for maximum vigil along the line of control to guard against infiltration and in the hinterland to ward of terrorist strikes; for the government this is the time to ensure that no untoward incident mars the smooth flow of activities as also to make use of the good weather to speed up development projects.

It is not as if this does not happen every year. The importance of this year is derived by the fact that continued peace and a successful season will cement the gains of the last two years and give a positive build up to the assembly elections slated for next year. Any kind of disruption will adversely affect the political climate of the entire state, not just the Kashmir valley.

It would be simplistic to believe that inimical forces would sit back and allow Kashmir to march unhindered towards peace and prosperity. They would, undoubtedly, have a well planned agenda for disruption in place and will wait for the best opportunity to put it into practice. It is, therefore, incumbent for the mainstream political force and the people to stay ready to face the challenge.

The tourist season is going well at the moment despite the apprehensions that came in the wake of the agitations post the execution of Afsal Guru. The existing occupancy rate in the valley is about 60 percent with a daily intake of 3000 to 4000 tourists. More than twenty jam-packed flights land at Srinagar international airport daily. The season is likely to gain momentum once school holidays begin by mid-May and when the pilgrimage to Shri Amarnathji begins. What has to be ensured is that the confidence with which visitors are thronging Kashmir is not allowed to be broken under any circumstance.

Security is central to the success of the enterprise. Security forces have well laid out standard operating procedures evolved through many years of experience. Unstinting support of the administration, the opposition and above all the people will act as a force multiplier and ensure that security stays on a tight leash. Attempts towards engineering disruption can be nipped in the bud by political activism and public support. The media can help by not playing into the hands of the disruptive forces. Security forces can also do their bit by ensuring that they do not use excessive force or do any such thing that gives an opportunity to the inimical forces to discredit them.

Along with the commercial activity the government also needs to ensure that maximum students get an opportunity to realise their professional dreams not only within the state but through the length and breadth of India, as is their right. Now is the time to provide maximum assistance in terms of counselling, admission, finance and a host of other facets that mark modern day education. This is also the time for those who have completed their education to be looking for jobs, not only within that state and government employment as is the fashion, but in other parts of India and the world. The leaders and elders should advise the youth to put the past behind them, get over this ghetto mentality, shun hatred, abjure mindless rage and direct their energies towards achievement like the rest of the youth of the country. On the plea of insurgency the youth of the State should not get used to shirking work nor should the leaders and the elders shirk their responsibility.

To sum up, Jammu and Kashmir in general and the Kashmir valley in particular, in the next few months needs to (1) ensure that all tourists go back happy and secure (2) ensure that the Amarnath pilgrimage is completed in an apolitical, secure and secular manner (3) ensure unstinting support to security forces in discharge of their duties with no reference to armed forces special powers act (AFSPA) and other such politically sensitive issues (4) ensure that any design by anti-national forces to engineer disruption is challenged through political and people power first and security intervention next (5) ensure that the youth are kept gainfully employed in pursuing studies and career options with all assistance for the state and the families (6) ensure that mainstream political activity is restricted to gainful dissent rather than gross opportunism that is exploited by inimical forces (7) ensure development projects are speeded up (8) ensure that the hospitality of the state is not misused by some vested interests.

There are, of course, many other aspects that merit attention of the government and the people but those listed above are the game changers for the valley in the present context, hence, the most important.

The leadership should rise above petty politics and ensure that the state and its people emerge triumphant. This will require all political differences to be put on the back burner for the common good. It will require taking the people ahead in a united and purposeful manner. The opposition needs to put its complete weight behind the government for running a smooth administrative and security structure and the government needs to take the opposition into confidence in all that it is doing. This is definitely not a tall order for the people to ask of their leadership considering the tremendous gains that would accrue from the same a year before the elections. As things are moving there is every reason to be positively inclined; only the momentum has to be maintained.