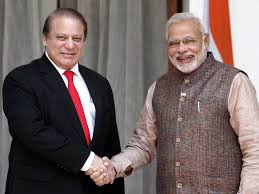 Pakistan has been following the Indian elections and political scenario with a fair degree of interest. Daily happenings have been and continue to be reported in major news channels and newspapers of the nation; prominent columnists have been writing on the developments regularly. Once the election results were announced, a flurry of opinion was generated on the emergence of Bharatiya Janata Party (BJP) as the main contender to form the next government with a clear majority and positioning of Narendra Modi as Prime Minister designate. Yet another chapter of brisk debate and discussion was opened by the invite sent by Narendra Modi to Prime Minister Nawaz Sharif to attend his swearing –in ceremony and its acceptance by the latter.

In a talk show held in Pakistan’s Dawn TV on the night when Narendra Modi swept the polls in India, Zafar Hilaly, a retired diplomat of the country remarked, “Thank God Jinnah created a new country for Muslims called Pakistan. At least we got away.” This is, in essence, the thought process in Pakistan at the result of the elections in India.

Pakistani columnists have been at pains to project a Hindu-nationalist identity for Narendra Modi and link it with a possible threat to the Muslims of the country. It has been widely opined that notwithstanding efforts to bring Muslims on board, a bulk of the community as also “other minorities” are wary of the hawkish Hindu support base on which has led BJP and Modi to power. Particularly astounding is a widespread assertion that the Modi government is likely to look upon all Muslims as agents of Pakistan.

Another unique argument put forth is the effect that the new government in Delhi will have on Pakistan’s already tottering economy. With India getting poised for an economic turnover under the new government many in Pakistan have expressed fears about the widening economic divide between the two countries and the feeling of frustration that the same would generate in the teeming millions without a future in Pakistan.

While the English press in Pakistan attempted to take a balanced view, the Urdu press was out-rightly combative. Hate speeches by a number of fundamentalist leaders like Hafiz Saeed, Former ISI chief Hamid Gul, Amir Hamza etc. have been carried by the Urdu press to build an anti-India, anti-BJP, anti-Modi hysteria.

These leaders have predicted that BJP will give a free hand to military commanders along the line of control to up the military face-off between the two Nations. They have expressed the need to form a union of Muslims like the European Union that has its own defence, markets and country so as to counter India. They have openly given a call for support to Indian Muslims who would be suppressed under the new government. So far as Kashmir is concerned they have been saying that the “Mujahedeen” operating there are now getting active support of the people.

It is being said that Modi has already established close relations with the US and Israel, the latter having invested heavily in Gujarat. This will lead to enhanced military and economic cooperation between these power blocs to the detriment of Pakistan.

Many across the media spectrum of Pakistan were prolific in their advice to Prime Minister Nawaz Sharif not to be hasty in accepting the invite for the swearing –in ceremony. It was insinuated that the invite, by itself, was a patronising gesture that should be dealt with diplomatic means rather than an immediate acceptance.

In the drama played out in Pakistan during the build up to acceptance of the invite it became quite apparent that the Pakistan army continues to play a dominant role in the politics of the country especially so far as relations with India are concerned. Nawaz Sharif had to seek approval from the army before consenting to attend the ceremony. The army had no option but to agree in view of the prompt acceptance of the invite by other leaders of the region but it did show its authority by making the Prime Minister sweat before giving the go-ahead.

Post the swearing-in and meeting between the leaders of the two countries Pakistan media has resorted to a slightly conciliatory tone and tenor. There is talk of a possible forward movement in dialogue. It is being opined that talks with BJP are likely to be more productive than with the Congress since Modi has declared his intention of furthering the agenda laid down by his party’s veteran leader Atal Bihari Vajpayee. Pakistani columnists look upon this posture by the BJP as one exhibiting a nationalist perspective as against an approach of personalised enmity that the Congress had adopted.

There are, however, many roadblocks visible. While the mainstream media is eloquent about the wisdom behind accepting the invite, sectarian fundamentalist elements are leaving no stone unturned to castigate Nawaz Sharif for having exhibited weakness and betrayed the Kashmir cause. Fundamentalist leaders like Hafiz Saeed had openly urged the Prime Minister to rake-up the issue of Kashmir, India’s so-called plan to construct dams on rivers flowing into Pakistan and India’s perceived inimical involvement in Baluchistan. That Nawaz Sharif did not raise any of these issues has added to the ire of the fundamentalists and he is facing considerable pressure from within Pakistan for his initiative.

Nawaz Sharif has stressed upon the need to break down trade barriers between the two countries, this is being looked upon by the fundamentalists as a vested interest of a person who is essentially an industrialist pursuing his business interest. This line of thought has the potential of weakening the political position of Nawaz Sharif.

It is quite apparent that Nawaz Sharif is not his own master when it comes to dealing with India. It is also apparent that many in Pakistan look upon the BJP government with distrust and suspicion. The Pakistan Army and the fundamentalist forces will do everything possible to build on this distrust. Under these circumstances to expect an early thaw in relations between the two countries would by rather simplistic. Having said that, it is also notable that attending the swearing in ceremony was a dignified and graceful initiative by Nawaz Sharif; undoubtedly it will help build a personal rapport between the two leaders which is a good reason for optimism.