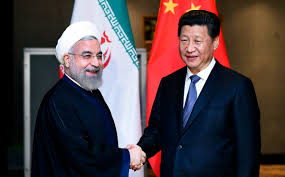 Media reports indicate the possibility of Iran falling into China’s lap is increasing by the day. Both the nations feeling isolated globally and facing challenge from a common enemy are most likely to embrace each other as per the Mandala theory of Kautilya, the famous Indian political strategist. Kautilya envisaged that the potential conqueror King (the Vijigishu) could become the overlord of the international master system of politics if he followed the Mandala theory. For Kautilya war is necessary and diplomacy is nothing but preparation for war. He said that “A King who understands the true implication of diplomacy conquers the whole world.” Kautilya’s foreign policy is based on the principle of “the enemy (Ari) of the enemy is my friend” (Mitra).Another category is the Ari Mitra (enemy’s ally).

Moreover, in Kautilya’s model there is no such concept of ‘permanent friends or enemy’, because today’s ‘Mitra’ may appear tomorrow as ‘ari’ or enemy. He also says that postures change alternatively in diplomacy due to changing conditions arising due to changing political circumstances. He also recognises the existence of middle kingdom (Madhyama) and Kingdoms not belonging to either of the alliances (neutral). The neutral (Udasina) King is defined as one “who is situated beyond the territory of any one of the above Kings, and who is very powerful and capable of helping the enemy, the conqueror, the middle (Madhyama) King together or individually or of resisting any of them individually.”While USA is an ‘Ari’(enemy) of China as well as Iran, they become natural Mitra. India fits in as a neutral state in Kautilya’s scheme of things and that is what India desires to be but certain political and strategic initiatives taken by India in the recent past have changed the perception of both China and Iran viz a viz India. They perceive it becoming an Ari Mitra.

It is reported that the Iranian Cabinet has signed a strategic agreement with China. The exact details of the proposed agreement remain in the realm of speculation as both sides have yet to officially acknowledge the same. The agreement is believed to have mortgaged Iranian sovereignty to the Chinese for economic gains. It is likely to find stiff opposition from the hard core conservative members of the Majlis (Iranian Parliament) supposed to be in majority. It, however, enjoys the blessings of the Supreme leader. As far as China is concerned the danger of Chinese companies coming under U.S. sanctions looms large and may not prove to be a financially sound endeavour. Nonetheless, it may end up as a shrewd geo-strategic move by both the parties. Undoubtedly, it is a geo-political anti-America axis but may prove a strategic anathema to New Delhi as well.

As per the leaked reports China and Iran are reported to have quietly drafted a comprehensive military and trade partnership. The deal would make way for about $400 billion worth of Chinese investments into Iran’s key sectors, such as energy and infrastructure, over the next 25 years. China is vigorously trying to emerge as an economic super power in post Covid era and in doing so is investing heavily in Xi Jinping’s dream Belt and Road Initiative (BRI) project. Iran thus may become a crucial pivot linking China with Europe. However, its cosying up with Iran has both the economic and military dimensions like the China-Pakistan Economic Corridor (CPEC). There is a proposal to link the two through a western arm of the CPEC through the restive Sistan-Baluchistan from Gwader.

The military fallout includes joint military exercises, joint training, joint research and development of weapons. This would virtually cede to China the control of the strategic Gulf and make Iran the dominant military power in the region with an arsenal of missiles and nukes.  There is also a likelihood of Iran handing over to China the development of the port of Bandar-e-Jask, the port outside the Straits of Hormuz.The strategic intent of both the initiatives is to secure China’s vulnerable sea lanes of communication and enable it to overcome the “Malacca Dilemma” while allowing Iran to bypass the sanctions.  Both the initiatives do not augur well for India.

As the situation stood a year back it was Iran which badly needed the Chinese help but China was dilly-dallying. However, the recent China-US trade war, USA led Corona offensive against China and the Chinese belligerence in the region particularly the border standoff with India are acting as  catalyst to close the deal. In doing so, China wants to kill two birds with one stone. The deal as and when it comes through would certainly change the geo-strategic environment in the region but would have grave consequences on India as well. The treaty would also have an impact in the South Asian region as well because Iran under the Chinese influence may bury its differences with Pakistan. This will further complicate issues for India in Afghanistan. While the proposed strategic agreement between China and Iran will be a win-win situation for India’s arch enemies China and Pakistan it would become a strategic nightmare for India.

Iran is a radical, conservative theocratic state while China apart from being an atheist Communist country is a known anti-Muslim nation due to the treatment meted out to Uighur Muslims of Xinjiang. But politics and strategic compulsions make strange bed-fellows. Will this agreement get the support of the conservative members of the Majlis remains a moot point? Iran’s compulsion is driven purely by the economic situation arisen due to the sanctions imposed by USA which has nearly paralysed its economy. China sees it as an opportunity of extending its strategic reach to the Gulf Region and Indian Ocean to counter the US strategy of containing China in the Indo-Pacific region. How long this merry-making can sustain will be too pre-mature to state since it is facing severe dissent from the opposition leaders also in Iran. If the deal goes through it would shift the Centre of Gravity of Cold War politics from Western Europe to the Middle East and Asia may well become the battle ground of Cold War II. Will New Delhi be comfortable and still be able to continue with its policy of strategic autonomy?

Apart from China knocking at its door, India has three major concerns. First is the loss of a friend with whom we enjoyed centuries of historical and cultural ties and its fall out on large domestic Shia community. Next is the loss of a crucial strategic resource supplier. Third, is the loss of only alternative land connectivity available to us for direct connect with Afghanistan, Central Asian Republic (CAR) nations and Eurasia. This is the great Indian dilemma.

India needs to act quickly and swiftly for damage control. India’s best bet lies in maintaining her strategic autonomy and building bilateral and multi-lateral alliances based on the national interests. India needs to send a strong message of not joining any camp while keeping her options open of facing a belligerent China. While, India should continue to build its military power to counter a 2.5 front challenge, its ultimate challenge to beat Chinese hegemony has to be economic. India at no cost should lose control of Chabahar and its ultimate integration with North-South corridor. An immediate outreach to Iran to convince it to not to bargain Chabahar is a must. It poses a great diplomatic challenge for the Indian foreign ministry. India should also consider developing Japan-India-Africa corridor as an alternative to BRI.

(The author is a Jammu based security and strategic analyst and  Columnist. anil5457@gmail.com)