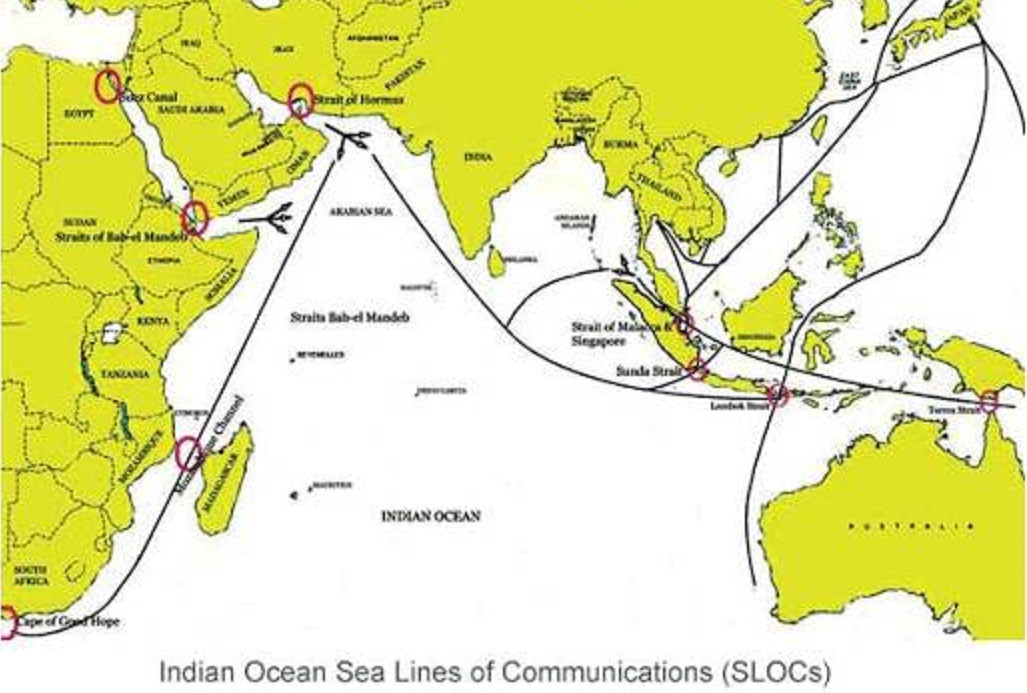 It’s a matter of pride for  India that Indian Ocean is the only ocean  on the planet earth which has been named after a country . The Indian Ocean is   the hub of sea trade and logistics routes and India has the longest coastline on this ocean. These geographical features provide India an immense strategic and location advantage in international trade and resultant geopolitics. In the British Era, India was the center  of a huge network of trade and communication stretching from Aden to Singapore. Unfortunately, post-independence, India squandered this advantage due to its limited ability to dominate the blue waters. If India wants to be emerge as a super power in Asia, it must leverage it’s geographic location to it’s full advantage. India’s strategy for increasing its influence in Asia must be guided by its location and consequently domination of Indo-Pacific region.

Admiral Alfred T. Mahan highlighted strategic importance of the Indian Ocean.  In his words, “Whoever attains maritime supremacy within the Indian Ocean would be a prominent player on the international scene,” India, by virtue of its centrality and strategic location as the sentinel  of the Indian Ocean Region and Indo-Pacific region generally , will remain vital for transit and world trade.

IOR’s rising geopolitical and economic importance and global influence is creating potential for cooperation among the countries, as security, economic, and environmental threats to the nations in the IOR are becoming convergent. Most of the countries within the region are seeking to reap the economic dividends through improved maritime connectivity and harnessing the blue economy but for  that infrastructure development needs to  be a prerequisite. Of late, in conjunction with Geo-strategic competition within the Indo-Pacific, we are also witnessing a race for strategic places and bases within the Indian Ocean region. As yet, India has no major rivals in this region, but China has been making concerted efforts to flag it’s presence in this area.

Standing tall as the guardian of Indian Ocean, India is situated between the center East, Central Asia, China and the Southeast Asia. India’s strategic location at the center of the Indian Ocean gives it a superb strategic importance and helps in maintaining contact with the rest of the world. India must remember that it can use its location to its strategic advantage by projecting power. Additionally, India can also use its central location within the Indian Ocean to become a hub of transportation, communication, and trade. India is fortunately also  blessed with abundant natural resources and manpower reserves. These are certainly  useful in establishing India as the dominant power within the Indian Ocean .

Blue Economy initiatives taken recently by India brings the main focus back to shared Geo-economic, Geo-strategic and Geo-environmental motivations within the Indian Ocean region. India now acknowledges the untapped growth and power potential of this region that would be fully realised with mutual cooperation of all countries in this area. India needs to intensify it’s Naval resources and foot prints in Indian Ocean to soar up their blue pursuits lest they’ll lose the ‘blue race’ within the IOR to rivals like China.

International cooperation and joint operations with friendly forces is  the key to blue water diplomacy and coercive tactics. The Indian Ocean cannot be controlled by any one country because of its sheer vastness and multitude of stakeholders, unlike the South China Sea. However, control of the Indian Ocean region is desirable since major sea trade routes pass through this region. India will have to strengthen  its ties with countries like Japan, Australia, South Korea, Vietnam  and other members of Association of Southeast Asian Nations (ASEAN) to pursue its strategic interests. Maritime collaboration through a mutual port use pact is that the primary ingenious way for growing diplomatic conversation among the QUAD (India, Australia, Japan and   the United States), without acceding an excessive amount   to each other. Fortunately QUAD is now coming out to check Chinese hegemony and mutually gain immense  advantage within the Indian Ocean Region (IOR).

The Indian Navy performs four sorts of roles within the Indian Ocean region—military, diplomatic, constabulary and benign to guard the maritime interests of the state. Given the geopolitical nuances within the Indian Ocean, the Indian Navy must transform itself into a blue water navy. For that to happen, it will have to first become a builder’s navy and achieve nation building through shipbuilding. Buying naval equipment is very costly and navies are not built in a day. Atmanirbhar route is the ideal way to pursuit our dreams of becoming blue water navy. The Indian Navy also must begin with concrete plans to adopt new age technologies. The   annual Budget for Indian Navy should also be increased keeping in mind, the rising aspirations of India as a regional superpower. Nevertheless, India still retains a focused desire to build a naval force capable of fulfilling its strategic goal of emerging as a significant global player and a regional super power.

India has positioned it’s first Tri services command at Port Blair, Andaman & Nicobar island. The first aim was to guard its strategic interests within the Strait of Malacca but aim plus was to put a command and communication structure at the islands, with reasonable logistics facilities. This Tri-services command will act as fulcrum for Indian Navy operations and also friendly naval forces , within the Indo-Pacific region. After establishment of a Tri-Services Command, there’s also a  proposal to roll out a ten year perspective plan  to create facilities for extra troops, warships, aircrafts and drones on the islands, strengthening the prevailing military facilities. Andaman and Nicobar isn’t only important from strategic point of view but has also become a pivot for  India’s joint operations within the IOR.

India is increasing it’s footprints within the blue waters of Indio-Pacific Ocean region. Strategically located islands within the Indian Ocean are crucial for domination of blue waters and safeguarding the country’s maritime natural resources. These islands are suitably located near strategic choke points and trading routes. Therefore, India is functioning overtime to determine bases on these islands, in conjunction with friendly countries. A collaborative approach to utilising their island territories within the Indian Ocean could provide a chance to watch the IOR better. Given  the current geopolitical competition within the Indo-Pacific region, these islands can provide advantages for strategic, logistical  and signalling purposes. These islands also provide a suitable oppurtunity for coordinated and joint anti-submarine warfare missions for   India and other countries in the Indian and Pacific Oceans.

The Indian government has setup listening posts and established Naval surveillance facilities in Madagascar and Mauritius. A smal land  remote Mauritian island called ALAGELA, located within the south-western Indian Ocean , 1,122 kilometres north of Mauritius is being developed as listening post and offshore base by India and Mauritius jointly.   This base on Agalega will cement India’s presence within the south-west Indian Ocean and facilitate its power projection aspirations in this region. In recent years, India has sought to further develop its military access to the south-west Indian Ocean and Mozambique Channel by building a replacement naval and air facility on Seychelles’ remote,  Assumption Island.

India has negotiated agreements with several states within the littoral IOR to get military access to their bases. Such agreements include access to Indonesia’s strategically-located deep-sea Sabang port and Oman’s Duqm port. India has also engaged with powers outside   the IOR, deepening cooperation with France and USA  through logistics agreements, which grant India access to port facilities at the U.S. base on Diego Garcia and   the French base on Reunion Island. This was followed by agreement between India and  Japan to  provide India access to naval facilities at Djibouti. Certainly,  there is  potential for India-Australia-France collaboration in using their respective islands to augment  their presence under a burden sharing model.

Cocos Islands, an Australian island in  Indian Ocean territory, which is nearly midway from India’s maritime neighbour Sri Lanka and mainland Australia, falls right within the middle of sea trade routes. A key advantage of these islands is surveillance and   Maritime Domain Awareness (MDA) missions. While the Malacca straits provides the busiest trading route connecting economies across Western Pacific and therefore, the Indian Ocean, the opposite straits through the Indonesian archipelago offers alternate routes for surface and sub-surface vessels. Agreements and understanding with Australia has been reached to use Cocos islands for joint naval surveillance of sea routes.

It is  extremely important for India to strengthen its naval capabilities before some  rivals appear in Indian Ocean , especially China. The Indian Navy has shown an exceedingly high operational tempo and emerged as a multi-dimensional networked force, that’s  able to combat any challenge within the maritime domain  in the 21st century. The Indian Navy remains a reputable , organised and combat worthy force. It must be augmented to become a blue water navy for dominance of Indo-Pacific Region.

Increasing the footprints and dominance in Indo-Pacific Region by having strategically placed bases and enhanced role for Tri-Services Joint Command at Port Blair, is a move in the right direction. Collaboration with other friendly countries like QUAD  will also pave the way for India to acquire an excellent power status within the coming years. The Indian Ocean is correctly described as a part of India’s ‘extended neighbourhood’ and   India’s diplomatic, security and economic interests got to be safeguarded by the Indian Navy, in this region. The Indian Ocean is critical for India’s strategic interests and India should work towards making it as the ‘INDIA’S OCEAN’