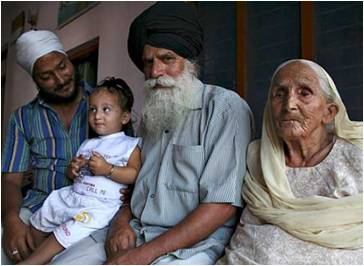 Simbal Camp, a small rural locality in Jammu district is an area steeped in history, it contains within its quasi-urban structure stories of heroism, hard work, grit and determination of a people struck by fate to become refugees in the times of the partition.

In the pre-partition era, Simbal was a barren uninhabited land bypassed by the famed canal system created by the Dogra dynasty which fed the adjoining Ranbir Singh Pura named after the Hindu Maharaja who was responsible for its development. Simbal gained prominence when it was earmarked as the settlement location for the Sikh citizens of the erstwhile principality of Jammu and Kashmir who were forced to flee from their homes in Poonch, Mirpur and Musaffarabad at the time of partition.

Even before the status of Jammu and Kashmir had been determined in the post partition era the Muslim majority in Poonch, Mirpur and Musaffarabad, assisted ably by the militant Razakars (Islamist militants), created conditions where the Sikh minority was forced to flee the area and seek refuge in the Jammu region. Families were scattered, revenue records lost, worldly possessions left back as thousands of people fled their home and heart in the face of a brutal assault. They were rendered homeless due to no fault of their own. All of them assembled in Simbal and were accommodated in makeshift camps. Thus, barren Simbal became Simbal Camp.

A glimmer of hope was seen when the Indian army, over two campaigning seasons, attained a position of military ascendency and was poised for reoccupation of the areas of Poonch, Mirpur and Musaffarabad. In fact, a whole lot of the able bodied young men from amongst the refugee Sikhs joined the 8 and 11 Jammu and Kashmir Militia to fight against the invading hordes. How the march of the Army was stalled by the Delhi administration in a misplaced belief of resolving the issue through the United Nations is well chronicled. What is not talked about is that, due to this decision by the government, the Sikh families accommodated in Simbal Camp became permanent refugees. They were close to getting back their lands when political expediency beyond their control left them destitute.

The spirited community was not to be cowed down, when the barren land of Simbal that they were sitting on was allotted to them in lieu of the fertile lands that they had left behind, they did not raise a murmur of protest; instead, they took upon themselves the herculean task of making the land productive. With no irrigation facility in place, ground water was used to make the land cultivable. Resources were scarce; the houses and infrastructure that came up was small and decrepit, but the spirit was there to move on in life and be successful once again. Younger generation were educated despite meagre resources and they went on to taken employment, both government and civil. Incomes were augmented by taking on the very difficult and challenging transport business. The small community, though beleaguered, did not extend its hands for assistance; instead, it rose from the depths of despair on merit of its own efforts. In a short period of time dedicated hard work paid good results and the community once again flourished.

Today Simbal Camp boasts of a vibrant and forward looking community of 20000 inhabitants with 14000 votes. It has a government school, a primary health centre and other facilities that are well maintained.

The courageous community has just about started looking up in life when apprehensions of a different nature have, once again, brought in a sense of disquiet. There has been some military movement in the area that gives an impression of a survey being carried out; the residents of the area are beset with a lurking fear that their land would be acquired by the army. A similar survey was carried out by the army about three years back; it is believed that at that stage the army rejected the proposal which now seems to be under reconsideration.

The barren lands of Simbal have been cultivated by the people through six decades; these people were converted into refugees due to circumstances beyond their control and have now got fertile lands and prosperity by sheer dint of hard work. Their small houses have given way to comfortable living accommodation made in their land holdings. They live as a cohesive, well knit community. To get embroiled in a similar situation of displacement all over again is something that they simply cannot face up to.

The immediate need is for the establishment to come out clean with its future plans. It would be very wrong for the administration to carry out a secretive defence acquisition process and then spring a surprise on the hapless people. If the apprehensions of the people are unfounded and if there is no basis for the rumour, then an assurance to this effect needs to be given by some reasonably high authority at the earliest. This assurance needs to come spontaneously from the Army as well as the civil authorities. Nothing can be gained by keeping a rumour simmering and the people in a perpetual state of insecurity against all tenets of democracy and freedom.

In case there is a need to acquire land for defence purposes in the area than the sentiments of this displaced community have to be given top precedence. The justification and righteousness of displacing them all over again when a few generations have taken a toll to build the structure has to be considered. In case there are some other options available they need to be exhausted before taking a sensitive decision of this nature. It would be most appropriate if the matter is resolved amicably now before it escalates into a trust deficit of unimaginable proportions.