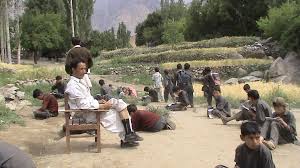 Gilgit-Baltistan is well and truly a down trodden colony of Pakistan. It is deprived of its natural resources with no thought being given to the plight of the people who continue to live a mediaeval lifestyle due to lack of basic facilities. The lack of proper educational facilities stands out as a particularly inhumane deprivation that Pakistan has heaped on the hapless people of the region.

Karakoram University is the only center for higher education in the whole of Gilgit-Baltistan; it was also built as late as 2002 during the dictatorship of General Pervez Musharraf. Successive governments have made no effort to build on this structure beyond an initiative taken eight years later to establish of a campus of the University at Skardu Hussain Abad in 2010. This new campus is also constrained by paucity of funds and is an educational center in name only.

Lack of finances does not come as a surprise considering that education gets only 5.3 percent of the total budget of the province which is, in any case, frugal. The quoted education fund is a little more than thirty crore Pakistani rupees; compare this with the budgetary allocation to education in Jammu and Kashmir which stands at Rs.734.66 crores (Indian currency) in the year 2014-15.

The World Bank brought out an economic report on Gilgit-Baltistan in March 2011. The report puts primary school enrolment at 51 percent; there is a steep drop to middle school enrolment which stands at 17 percent; the enrolment 10th class onwards at 14 percent is the most disquieting. Most of the schools in the region have not been recognized by nodal educational agencies in Pakistan since they do not meet the parameters laid down, this in a country that cannot boast of any accomplishment in the arena of education.

There is, unfortunately, no outlet for the small segment of talent that is available. The 18 colleges in the region (ten for boys and eight for girls) are hardly sufficient for the needs of the region however minimal. There are no vocational, medical or engineering colleges in Gilgit-Baltistan; inauguration of the first medical college in the region was announced by the PPP Prime MinisterYousuf Raza Gilani on September, 29, 2009. The college is nowhere near opening as yet. There are limited seats for students of this region in colleges across Pakistan; medical students, for example, get a dismal 74 odd seats across the country and that also since very recent times, opportunities for scholarship opened up only recently are highly inadequate to meet the requirement.

Rampant corruption afflicts the education sector. Illegal appointments, fake certificates and other such nefarious activities are unbridled. There are some institutions where fee has been waived by the federal government yet money is being extracted by a well-established mafia with the proceeds going up the ladder in all government circles.

The biggest racket by far is in the selection and appointment of teacher’s right from the primary school to the university level. In the case of graduate studies and above there are many instances where teachers selected have been found to be less qualified than the students they are required to teach. Undergraduates from Karachi University have been appointed to take classes for B.Sc honours in Karakoram University – can it get more ludicrous than this?

There are a number of international donor establishments that are ready to uplift the education levels of the region. The main impetus is coming from the Aga Khan Foundation that is looking at establishment of the Aga Khan University and institutes for educational/human development. AusAID launched an Education Development and Improvement Programme (EDIP) in 2010 mainly for differently abled children. Sadly, whatever little money comes by in the form of international aid is quickly eaten up by the members of the well entrenched mafia.

Recently there has been an instance where 180 employees of the education department were sacked on grounds of having been employed through corrupt practices. Such is the clout of the mafia that the chief secretary of the province was forced to rescind the order. It was deemed to be illegal for the simple reason that the sacking was done without serving a show cause notice and hence violated the law. An outright misuse of authority and a corrupt practice was thus legitimised behind the veil of flimsy official procedure.

The federal government along with its stooge provincial government in Gilgit-Baltistan has got down to preparing a Vision-2025 document to address the problems afflicting the education sector. The document will attempt to address the present and future educational needs and challenges within the framework of the national education policy and project the same to the relevant stakeholders. Vision – 2025 will also look at ways and means to attract resources for the educational programmes. One big reason for these initiatives is to make the federal government look good in areas such as international monitoring of the millennium development goals etc.

Overall, the capacity of the education sector is so low that fundamental baby steps are required to give it an impetus and not the grandiose elements contained in the millennium goals. The plan is there but how it will be achieved is not known.

The silver lining and only hope comes by the few determined and brilliant young people of the region who have managed to circumvent all odds and attain education within Pakistan and abroad. Quite a few of them have returned home and started teaching the children voluntarily, they are spreading an awareness for the need to enhance education levels and are agitating with the government to upgrade facilities instead of giving mere lip service. Such educated people cannot be fooled easily – so they are making an impact!

One cannot help but get a feeling that a conscious effort is being made by the powers that be to keep Gilgit-Baltistan uneducated and down trodden. It is only by doing so that the gross exploitation can continue. There is a need for the global community in general and India in particular to raise a voice in support of these deprived, disadvantaged and underprivileged people.