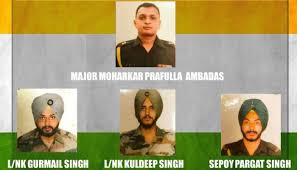 On December, 24, when the world was celebrating Christmas Eve, four brave sons of India guarding the frontier embraced a hero’s death while performing their sacred duty. They lost their lives due to a dishonourable, un-soldierly action by a dishonourable and un-soldierly adversary, Pakistan.

The brave hearts, Major Prafulla Ambadas Moharkar, Lance Naik Gurmail Singh, Lance Naik Kuldeep Singh and Sepoy Pargat Singh belonging to the illustrious Sikh Regiment were deployed along the Line of Control in the Keri Sector of District Rajouri in Jammu and Kashmir. The action by Pakistan could be an ambush or cross border fire; what is undoubted is that it was an unprovoked a devious act that goes against the tenets of soldiering.

Pakistani troops deployed along the Line of Control are known to conduct such action at this time of the year. It is so because nights become longer and visibility is limited due to the cold weather and resultant fog. The notorious Border Action Teams (BAT) of Pakistan takes advantage of these conditions and conduct such acts to lower the morale of the Indian troops and open up gaps to boost infiltration.

In this particular instance, Pakistan has gone very wrong indeed since the very thought of instilling fear in Sikh troops is flawed. It was at this time of the year that revered Guru Govind Singh, the tenth master of the Sikhs, while pursuing a righteous cause for the sake of oppressed humanity, fought the epic Battle of Chamkaur.

The battle was fought over three days from December 21 to 23, in 1704 between the Khalsa of Guru Gobind Singh and the coalition forces of the Mughals and hill chieftains. Two sons of the Guru, who were in their teens, died fighting in the battle while two younger sons were captured by the Mughal Governor of Sirhind and most brutally interned in a brick wall .

The sacrifice of the Guru and his family resulted in infusing a strong military ideology among peasants which led to the ultimate downfall of two of the strongest empires (Muslim and Afghan) seen in the history of the world and creation of a new one – the Sikh Empire.

This battle brought to the forefront the legacy of the Guru in evolving one of the best and most noble communities of soldiers that the world has seen.

The Sikh community stands firmly in on the ideals of its Guru and considers it an honour to sacrifice in the cause of the nation.  Martyrdom for this brave community in December is considered particularly holy, so the Sikh troops who have fallen are particularly blessed

That the unit will not allow the unholy act of the enemy to go unpunished was a given. Pakistan has already paid the price with a loss of three of its soldiers in a short border action by Indian troops. The action witnessed participation of the troops of Sikh troops thus redeeming honour. More such actions by the Indian army and the unit are possible in the near future. The units can also be depended upon to undertake its duties with even more resoluteness.

What Pakistan is failing to realise is that the more it indulges in such perfidy the more determined the Indian troops become resolute to challenge its evil intentions. It has not achieved any major success in the preceding years when it indulged in similar acts and it is not likely to succeed now.

It would be of value for the Pakistani military leadership to see the fortitude, strength and grace with which the wife of Major Prafulla Ambadas Moharkar has paid last respects to her brave fallen husband. The picture is available on the internet in various formats. One look at the photograph will be enough for the Pakistani generals to realise what mettle the Indian army troops and their families are made of and how wrong they are in holding the illusion of challenging this great army and this great nation.

Tenets of military honour followed by India and Pakistan are the same, it is a wonder as to why the Pakistani military ideals have degenerated to this degree. If the Pakistan Army considers India to be an enemy, it should fight openly as soldiers are expected to and may the best man win! Why indulge in backstabbing and deviousness like common vagabonds? The universal fraternity of soldiers is quite saddened by this lowering of the honour and good name of the noble community by such acts of the Pakistan Army.

One rarely hears of a Pakistani officer being killed along the Line of Control and International Border; this implies that the Pakistani officers merely pass orders and do not soil their hands with the dirty work being conducted by there. The Pakistani ranks and file belongs to traditional martial races and they definitely must be keeping military honour at the highest pedestal as the Indian troops do. It is time for them to raise their voice against the perfidious policies of their generals and political leaders. They should look for an honourable fight rather than killing like mercenaries and also dying ignominious deaths.

This sad incident should come as a wake-up call for Indians as well! The Christmas and New Year revelers need to spare more thought for those who make this revelry possible with their sweat and blood. The soldiering community cannot be taken for granted as is becoming a norm of late. The lives of the soldiers are very valuable; replacing brave hearts like Major Prafulla Ambadas Moharkar and his courageous colleagues is a quite impossible. Looking after their families is a very big responsibility indeed.

India needs to work towards a permanent solution to contain Pakistan; we cannot sit back and allow our brave soldiers to be killed in this manner. The army is doing its job and doing it well, now it is for the political leadership and the country to stand up and be counted. The country must explore all avenues for peace, but if all out war is inevitable, so be it. Let us go in and finish the matter once and for all.