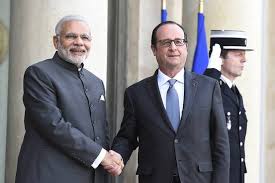 The NDA Government received a decrepit Defense Ministry as a legacy from the UPA Government. By moving Manohar Parrikar from Goa to New Delhi as Union Defence Minsiter, PM Modi aptly demonstrated the seriousness with which he looked upon the problem at hand. He pulled out his best man from a position where he was achieving great results to head the ministry and get it rolling.

The decision is now paying dividends; there is a new energy visible in the defence establishment after almost a decade of sloth and apathy. The decision to go for outright purchase of weapons to fill critical gaps in the country’s defence arsenal is a manifestation of the determination to get on top of the problems at hand.

The Indian Armed Forces, especially the Indian Air Force, would have heaved a huge sigh of relief in the aftermath of the Government’s decision to pick up 36 Rafale fighter aircraft from France in a ‘fly away condition’ to meet a ‘critical operational necessity.’

There is still a long wait of two years before the aircraft are actually inducted into the Indian Air Force, many hiccups can develop in the interim period. The big consolation is that the Government has shown an ability to grasp the massive problems that the defence establishment is facing and the will to come to grips with the same.

It is unfortunate that many have found reason to find fault with the decision to the extent of terming it as an “unmitigated disaster.”  The necessity here is to see the larger picture. The Indian Air Force is gasping for breath and, at this stage, it is more important to provide the oxygen. The eternal arguments against purchase of one of the other equipment have caused many setbacks in the past and should not be allowed to do so in the future.

If the government had gone for the Russian built SU- 30 Mk1 as has been suggested by certain quarters, then a question would have been raised about the wisdom to opt for equipment that had already been set aside in favour of Rafale after due deliberation.

There is negligible difference between one and the other fighter aircraft of a particular generation. It is ultimately the man behind the machine that counts and the Indian Air Force pilots are the best and the most courageous in the world. Their problem is not the aircraft that they would fly; it is not having an aircraft to fly at all.

The UPA Defense Minister, AK Antony, is a good and honest but ineffective man. He was unable to come to grips with the internal dissensions and frictions between the service headquarters and the ministry. Despite his senior position in the Congress hierarchy, he was unable to push the requirements of his ministry at the highest level; he was cowed down by the finance, home and external affairs ministries. His fetish for honesty was by farhis most destructive personality trait; the blacklisting of international defence production firms for flimsy reasons led to isolation of the country in the international weapons market with terrifying consequences.

Manohar Parrikar entered the arena with phenomenal problems to address. Being a qualified engineer from one of the best institutions in India he came on to his job with a clear understanding of the importance of equipment in this technology driven establishment. He also brought with him a thought process based more on logic rather than personal traits and politics. Being a mass leader with Rashtriya Swayamsevak Sangh (RSS) roots he understood the need to keep the personal and professional threshold integrated, especially so in the highly divided team that he took over.

The Defence Minister is approaching the problems with a clear mind and in a transparent manner. He does not speak to the media much, but what is happening in his ministry is there for all to see.

He has laid down processes whereby decisions are taken in a time bound manner, if need be, by intervention of the political leadership; by doing so he seeks to avoid incessant bureaucratic wrangling.

He has moved the One Rank One Pension (OROP) demand through the inter-ministerial maze deftly to get it to the point of fructification. This single facilitation will remove their misgivings of the soldiers and do wonders in raising their morale.

The Defence Minister has the stature and more importantly, the will, to get his way within the inner power circle of the government. This crucial ability was lacking in the previous incumbent.

The change becomes palpable when one hears the service chiefs talking to their troops. Instead of giving lectures on inane subjects like leadership and honesty etc they inform the environment about concrete actions that are taking place to address the various needs and shortfalls.

The problems are so huge that sincere hard work over a sustained period of time will be required to overcome a critical situation. The silver lining is that there is a will and a determination to do so.

If the current pace is maintained the country will be in a fairly stable position by the time the tenure of this government comes to an end. The crunch lies in not getting deterred by the criticism that has become the norm of vested interests in this sector. The fact that no decision can be perfect should not become a reason to avoid decision making in totality. There is a feeling of hope that the Modi-Parrikar partnership will lead the defence establishment out of the cesspool that it is currently mired in. The fervent wish is that the hope should not be misplaced.