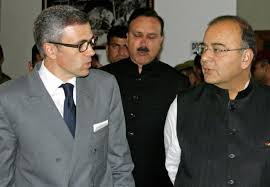 Union Defence Minister Arun Jaitley, as was expected, chose Jammu and Kashmir as his first border state destination for an orientation visit and that too within a month of taking over the reins of his ministry. There was speculation of some fireworks since this was also the first visit of a senior minister to a state ruled by the opposition; there was also expectation of some hard talk in tune with BJP’s stated policy of taking a firm stand in the matter of ceasefire violations and export of terror into the region from Pakistani soil. The fact that Pakistan chose to carry out a ceasefire violation on the eve of the visit added to the sense of drama, accentuated by a tweet by Chief Minister Omar Abdullah questioning the timing of the incident.

The visit of the Defence Minister belied all negative speculations in its tone, tenor and content. Arun Jaitley surprised everybody by expressing satisfaction and optimism at the situation in the state and thus giving a pat on the back to the presently beleaguered Chief Minister of the state. With regard to the ceasefire violation he reiterated the policy enunciated by the Prime Minister that talks and violence cannot go hand in hand. He capped his argument by expressing full confidence in the capability of the Indian army to deal with any adverse situation that may develop along the border. Further, he ruled out possibility of revocation of the Armed Forces Special Powers Act from the state.

On the political front he committed to dialogue with any group “within the framework of the constitution.” Predictably, the comment elicited a sharp reaction from the Hurriyat Conference. The conglomerate rejected the possibility of a dialogue within the Constitution of India; this has set the pace for the government’s engagement with the separatists in the future.

By the look of it one would get an impression that there is no change in the policy being enunciated by the new government that advocates strong and stringent options to deal with the situation in the state. It is only when one reads between the lines that the true import of what Arun Jaitley has said comes to the fore.

It is simplistic to think that one visit by Nawaz Sharif to India and one handshake will change Pakistan’s policy towards India and Kashmir. In any case, Nawaz Sharif has a minimal role to play in the formulation and implementation of Pakistan’s Kashmir policy that remains exclusively in the Pakistan army-Jihadist domain. In fact, there is no point in talking about Kashmir with Nawaz Sharif at all, the person to talk to is the other Sharif (General Raheel Sharif) who commands the Army and he does not come in the talks loop. This does not imply that diplomatic and other efforts to rein in Pakistan should be stopped; but it should also be understood that such a change of heart in the country is easier said than done.

The comments of the Defence Minister when seen against the backdrop of this realistic context are significant. He has given an open hand to the Indian Army to deal with the situation on the border in a manner that does not compromise national security. He has also given a veiled warning to Pakistan that its maverick forces on the border will no longer get a free run in their evil designs and will be punished appropriately for their misadventures. By exuded commendable confidence in the nation’s armed forces he has thrown an open challenge to the Pakistan army to do what it can and remain assured of going back with a bloody nose! As Defence Minister he would not be expected to do more than this.

The media has an important role to play in implementation of the tacit policy enunciated by the Defence Minister. Constant haranguing on ceasefire violations is not going to serve the national purpose. A better option would be to embarrass the Pakistanis for the illogical course they are following to achieve their goals, having failed miserably in implementation of their belligerent strategy over decades on end! Pakistan should be made to understand that continuing with it present course amounts to exhibiting a lack of vision.

On the political front the new government would be well advised to follow a two pronged strategy. The first prong would obviously relate to doing everything possible to strengthen peace, tranquility and development in the state of Jammu and Kashmir, especially the Kashmir valley. The second prong should be addressing the problems being faced by Indian citizens residing in Pakistan Occupied Kashmir and Gilgit-Baltistan who are reeling under sadistic domination by the Pakistanis and Chinese since the partition of the sub-continent. The people of Pakistan Occupied Kashmir and Gilgit-Baltistan have the right to look for Indian intervention in their fight for freedom from a neo-colonial yolk. By extending to them all support India will only be performing its moral duty.

When the centre of gravity of the issue shifts towards the occupied territories and their people there will be a spontaneous uprising against the oppressors. It is the support of the people that will ultimately reduce violence along the line of control and, as a corollary, the export of terror apparatus into the Kashmir valley. The Indian policy should be concentrating in this direction rather than attempting to put an end to ceasefire violations which is quite unlikely.

The amiable atmospherics that the Defence Minister has created will go a long way in the benefit of the state. It will pave the way for the Home Minister and later the Prime Minister to engage with the people, the government and the security apparatus in the state in a positive manner. A very big milestone has been crossed with ease due to the admirable handling of the situation by a mature leader. What is now required is to build on the positivity that has been generated.