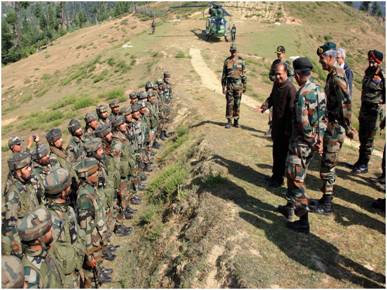 After a long hiatus of 18 months, Defence Minister AK Antony visited Jammu and Kashmir over two days from July, 28 to July, 29. The unusually long time gap between visits to a strategically important part of the country is quite intriguing. What could be the reasons for the same? One possible reason could be the acrimonious face off between the ministry and the army headquarters during the tenure of the previous Army Chief, General VK Singh. It may be that the minister was uncomfortable with the idea of touring with the General and he put off such important schedules for this reason. The second possible reason would be to avoid a head on demand for revocation of the Armed Forces Special Powers Act (AFSPA) which was bound to come from Chief Minister Omar Abdullah during any official meeting with the defence minister.

Earlier in the week the defence minister had convened a high level meeting to review the overall security situation in the country. This meeting was attended by the national security advisor, the three service chiefs and the defence secretary. It can be fairly assumed that he had taken a wide ranging opinion on the state of security in Jammu and Kashmir; the minister then took with him a high powered team comprising of the Army Chief, defence secretary and a number of officials to Jammu and Kashmir.

The extensive preparation marked by the high level meeting on security and the high powered delegation that accompanied the minister is an indicator of the importance that was accorded to the visit. It was definitely not seen as a run of the mill affair. It is evident that the defence minister wanted to be well prepared for his meeting with the Unified Command and also with the Chief Minister and the Governor of the State.

On arrival in the State on Saturday, July, 28, the defence minister chaired a meeting of the Unified Command and addressed the senior officers responsible for the security grid in the State. The heads of JK Police, paramilitary forces, intelligence agencies, senior government functionaries and the army corps commanders were in attendance as was the Chief Minister and Army Commander, Northern Command. The defence minister stressed upon reducing the visibility of troops without compromising efficacy and called for enhanced coordination between security forces and intelligence agencies. The defence Minister held separate meetings with Chief Minister Omar Abdullah and Governor NN Vohra.

The next day, minister was given a detailed brief with respect to the infiltration pattern of terrorists and the measures being taken by the army to prevent such attempts; he then proceeded on a visit to a forward post in the Tangdhar region of Kupwara which is a favoured infiltration route for militants. The visit to Tangdhar, however, had to be cancelled midway because of bad weather and the party then diverted to Zachaldara for an impromptu interaction with the troops deployed there. The minister spent some time with the troops and enquired about their welfare. He asked them about the quality of rations, clothing and shoes they were getting and whether they were satisfied with it. The ministry of defence has taken several measures in the last few years to improve the quality of supplies to the Jawans posted in remote locations.

The prelude to the visit witnessed a concerted attempt by some vested interests to force the issue of revocation of Armed Forces Special Powers Act (AFSPA) into the agenda. News reports alleging a deal between Chief Minister Omar Abdullah and the Army Chief, General Bikram Singh, with respect to partial revocation of the act were carried by some newspapers. It was inferred that the information had been taken from authoritative sources within the army headquarters. A little before the visit, it was also inferred in some newspapers that the defence minister was going to the valley with the intention of declaring a partial revocation of AFSPA.

At the end of it all, the defence minister made no commitment for any changes in the security paradigm of the region. The outcome of the visit, therefore, puts paid to the sustained media campaign by some vested interests against continuance of the AFSPA. It seems that the defence minister went to the valley with a specific purpose of giving a clear indication that AFSPA is not likely to be modified or withdrawn anytime soon.

The issue of reducing visibility of troops has been high on the agenda of the army for some time now. The defence minister has given a fillip to the policy by giving a clear direction on the subject. This is a step in the right direction and the policy, though already in place, will now be implemented more dynamically. The need to enhance coordination in intelligence gathering and sharing is also something that needs to be looked into more vigorously. If specific information is provided the need for extensive patrolling by troops will reduce and this will automatically lead to lesser visibility; this will also facilitate precise, well coordinated counter terrorist operations on well identified targets which will ensure less collateral damage to both life and property. By insisting upon a visit to a forward area, despite the cancellation due to bad weather of the original schedule, the defence minister has given a message to all troops operating in the valley that the government is standing firmly behind them and that they should perform their duty fearlessly and without apprehension. Overall, the visit of the defence minister, though coming after a long time, was successful and productive. Matters at hand were well articulated and the right message with respect to the security policy of the government was sent out. It is bound to positively impact the security scenario of the State.