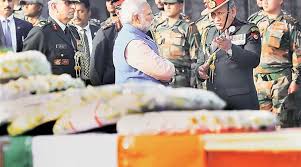 The Army Chief, Gen. Bipin Rawat, in a recent statement said that those attacking security forces during Counter Terrorist (CT) operations will be treated as “anti-nationals” and will face “tough action.”

A statement of this nature by the Army Chief should have come a long time back. The difficulty being faced and the avoidable casualties being suffered by security forces in conduct of CT operations in Kashmir due to certain obstructionist acts of locals at the behest of anti-national and divisive forces is well known and should have been addressed much earlier.

The statement came in the wake of the army losing four of its brave soldiers, including one officer, in two separate counter terrorist operations in Kashmir on February 15. Earlier on February, 12, the security forces had lost two brave soldiers.

It has been established that the counter-terrorist operations on February, 15, were hindered by stone pelting locals. It is not the first time that an obstruction of this nature has been engineered by some segments of the local population. Locals resort to stone pelting due to pressure by the terrorists and in some cases because the terrorists stuck in the cordon are from their area. Young boys are also paid by anti-national forces to rush to the encounter site to pelt stones.

The stone pelters’ go about their business fearlessly because they know that security forces are under strict instructions to avoid collateral damage during counter terrorist operations and would, as such, not respond to their cowardly and anti-national act.

That the separatists would voraciously speak against the statement made by the Army Chief was well known. What strikes an obnoxious chord is the negative line taken by the so-called mainstream political parties of Kashmir, and most sadly, the Congress party too.

The National Conference said that such posturing would compound the situation and increase hostility in the Valley. “It is tragic that New Delhi is trying to talk to the youth of Kashmir through the defence establishment when there is a need to engage them politically,” stated the spokesperson of the party.

Omar Abdullah and his party have all the time in the world to engage the Kashmiri youth politically and turn them around. This, in any case, is their job as political parties. So what is holding them back? The party would be well advised to act more and pontificate less.

The same sound advice holds good for the Congress party which also could not hold back the urge to score some brownie points and made many statements obliquely criticising the Army Chief. It would be opportune to remind the Congress that it had a whole decade in power to handle the Kashmir situation with “great care” – so what came out of it? It would be best for the party to remain silent and let somebody else try out something different.

A Kashmiri MLA, Engineer Rasheed, termed the statement of the Army Chief as a “confession that state has lost the control in Kashmir.” A good method for him to drive home his “lost control in Kashmir” point would be to resign from the Legislative Assembly that he now considers to be redundant. Now it is to be seen if he is man enough to do so.

It is also quite evident from the immature and supercilious utterances of various political parties that they will never look beyond their collective noses and will not hesitate from negating considerations of national security for petty political brinkmanship.

It is, nevertheless, necessary to understand the gravity of the situation. In the beginning of this millennium, the terrorist to security forces kill ratio stood at 10:1. In other words, for every 10 terrorists exterminated the security forces lost one brave soldier.

During those times, the military commanders were very sensitive to loss of life of the soldiers.

This was before the Congress party, under the docile Prime Minister Manmohan Singh came up with a self defeating “no collateral damage in counter terrorist operations missive to the security forces,” as a part of his policy of zero tolerance to human rights violations.

Due to this faulty political missive to the security forces, operations that were earlier conducted with great care, deliberation and patience in order to avoid casualties are now being conducted in a hurried manner so as to finish them before some locals get into their stone pelting and obstructionist mode. The hurry results in security forces buying more casualties.

A second reason for the casualties is that security forces have to avoid collateral damage even to property, and that results in conduct of room to room searches. The risk involved in such searches is colossal.

Due to the foregoing factors, the casualty ratios kept changing over the years to the distressing situation at present when they stand at almost 1:1, meaning that for every one terrorist killed one security force personnel is also losing his life. This is simply not acceptable.

It is necessary to define as to what constitutes human right violations in the Kashmir Valley. Casualties to such persons who are obstructing the conduct of operations against enemies of the nation definitely do not come in the realm of human rights violations. In fact, if such people are not killed during the operation they would be required to be identified, arrested and jailed after the operation for seditious activities.

If the Army Chief has taken initiative to call for a change in the defeatist operational policy, he should get full support of the nation and all political parties across the board. The government, of course, needs to move forward urgently with a revised policy which saves the precious lives of soldiers being sacrificed for no logical purpose and also saves the nation from the embarrassment that it is facing due to the macabre spectacle of soldiers in coffins being transported every second day from the Kashmir Valley.

(Jaibans Singh is a renowned commentator on Kashmir affairs)