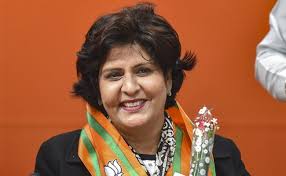 Deepa Malik, India’s first and only woman para-athlete to ever win a Paralympic medal across any sport, took the political plunge on 25th March 2019. She joined the Bharatiya Janata Party (BJP) in a simple ceremony and was duly welcomed by BJP President Amit Shah in the presence of party’s Haryana unit chief, Subhash Barala, and general secretary Anil Jain.

Prime Minister Narendra Modi had said in his Mann Ki Baat, and during the inauguration of TransStadia at Ahmedabad that every Indian youth should meet Deepa Malik and hear her motivational talks to get a correct outlook towards life, and also to understand how the youth could contribute towards nation building.

Deepa Malik attributed her decision to join BJP to the assistance provided by the NDA government under Prime Minister Narendra Modi to para-athletes that resulted in a vast improvementin their performance at the international level. “Prime Minister Narendra Modi ji and his government has been very supportive towards differently abled people, Modi ji’s attention is commendable. Policies for Divyangs, which has also impacted sports policies have been put in place. I prepared for Rio 2016 Games without any discrimination and I have not seen such empowerment of Divyangs before. Even the Disability Bill has been upgraded. Earlier this bill had 7 disabilities, but it now includes 21 disabilities, which effectively means that more disabled persons have been brought under its ambit. This is a commendable move indeed,” said Malik. She also expressed her desire to work for the nation in concert with the ideological base being provided by the BJP.

That Malik was gravitating towards the BJP was noticed in October last year when she credited Target Olympic Podium Scheme (TOPS) and Paralympic Committee of India (PCI)–both initiatives of the NDA government— for her achievements in the third edition of Para-Asian Games, in which she won two Bronze Medals for Discus and Javelin Throws respectively. “I would like to thanks TOPS Scheme and Paralympics Committee of India who trained us for such a big platform,” she said.

Deepa Malik’s life is a saga of grit and determination against all odds. She has an Army background. Her husband, Colonel (retd.) Bikram Singh Malik, served the Armoured Corps in one of the oldest regiments of the corps, The Scinde Horse. Her father-in-law, Major General (retd.) Balbir Singh Malik commanded the same regiment as her husband. Her husband’s grandfather Late Major Asaram Malik was a gallantry war hero from the Poona Horse in World War II. Her father, Late Colonel BK Nagpal, served with the Grenadiers, a reputed Infantry Regiment. Her brother Brigadier Vikram Nagpal is presently in service.

Deepa was born as a normal healthy child in 1970, but in 1977, she suffered from tumours along the spine and recovered after surgery and extensive physiotherapy. She got married in 1989 but her condition worsened once again at the age of 29. She underwent two surgeries in the Army Research and Referral Hospital, rated amongst the best in the country, but could not recover and was paralysed from the chest and below. Deepa was brave in the face of adversity, showing the true qualities of an Army family member while she underwent life threatening surgeries for chest below paralysis. During these times Deepa Malik’s husband was posted in the Kargil war sectors and she looked after their very young daughters while recuperating from her surgeries. Deepa braved these tough times alone for the first three years of her paralysis as her husband could not be with her due to exigencies of Operation Vijay and Operation Parakram of the Indian Army.

Deepa has a very severe international disability category termed as F-53, which results in chest below paralysis. Her condition translates into complete paralysis below the chest with zero sensation in the afflicted areas, no bladder and bowel control, half the lungs inflated, poor body temperature control and blood circulation with no torso balance. Only her arms and shoulders are functional. The three spinal surgeries, about 180 stitches between her shoulder blades in upper spinal region makes long sitting, training and driving with arms extremely challenging.

However, right from the word go Deepa was not ready to allow her disability to come in her way of leading a normal life. Her favourite quote from her own motivational talks is, “…the only disease I suffer from is happiness.” You always see her with a smiling face and she is often caught saying that her body may be paralysed but her soul is not. Deepa says that she has learnt that life is the only festival that can be celebrated everyday.

She also created a successful catering business at Ahmednagar in Maharashtra, where her husband was posted. Her effort to establish the business meant that she was financially self-reliant and not a liability.

At the age of 36, Deepa felt that she had to do something more with her body to prove her mission — ‘Ability beyond Disability’ and change the stereotypical mindset of the society towards the limitations of a woman in disability. And true to her grit and determination, in less than six years, she became an international sportsperson. So, her journey towards sports began at the age of 36, as a swimmer creating world records in river swimming. At the age of 39, she became an athlete and learnt Javelin Throw creating new Asian records, and for the past seven years Deepa has held the Asian record for Javelin Throw in the F-53 category. However, she was faced with a new challenge when at the age of 45 she took to Shot Put to represent India at the Rio Games 2016.

Deepa is India’s first female Para-athlete to win a medal at the Paralympics. She made her country proud by winning a Silver Medal at the 2016 Summer Paralympics in the Shot Put category. She has more than 50 National Gold Medals in Swimming, Shot Put, Javelin and Discuss Throw and 23 International Medals to her credit having the unique feat of winning three consecutive Asian Games medals with three consecutive Asian records thereby bettering her own previous ones. But what makes Deepa smile more about her sports journey is that she was able to contribute to the policies for the differently abled sportsmen as a working group member.

Deepa is also an adventure sports enthusiast and she has created world record by becoming the first paraplegic biker and a car rallyist. In March 2010, she successfully completed the very difficult Desert Storm Motor Vehicle Rally; a journey of almost 3000 km through breath taking desert landscapes and the toughest terrain, an unprecedented feat of endurance and courage. She is a Limca Book Record holder for her remarkable feats in swimming, biking and driving.

Her feats have been acknowledged with many awards at the national, state and social level. Prominent among these are the Arjuna Award in 2012, Padma Shri in 2017 and Haryana Karambhoomi Award in 2008. The Government of Maharashtra has also awarded her with the Chatrapati Award (Sports) in 2009. The list of her awards is very long and meritorious.

Who can be better than Deepa as a role model and inspiration for incentive, drive, enthusiasm and celebration of life to the hilt? She shares her experiences through motivational workshops across the globe in various educational institutes and women empowerment and diversity platforms. For this contribution she was chosen by the All India Council of Human Rights, Liberties & Social Justice for Globe’s Most Exceptional Speaker Award in 2015. Also, for completing over 300 lectures she has been conferred with two honorary doctorate degrees.

Deepa Malik is a national icon and a role model for the young as well as the differently-abled to pursue life with determination. It is this message that she gives in all her addresses where the audience listens to her in rapt attention. “There was a time when people and the society were confused as to how and what I will be able to give to my daughters due to the social stigma, taboos and stereotypes attached around my physical condition. I am happy that my motherhood and womanhood became my strength to recover and reclaim my life as an abled person with a lot of passion to impact the society in the right direction. And today I stand tall as a proud mother of two educated and accomplished daughters, where my elder daughter Devika has already won international and national accolades for her social work in the disability sector and younger daughter Ambika is an MBA graduate working in the corporate world,” she says in her motivation talks.

Deepa Malik is the kind of leader that India requires, a person who will stimulate and encourage the people more by her actions than her words. She associates with the ideology of BJP and will be in a position to give her best to the country as a part of the party. Her decision to play a leadership role will benefit the party of her choice as well as the country in a great measure. She has not only become a role model for divyangs and women but also for the youth. Deepa’s resilience and her never say die attitude is an inspiration for all Indians across any age or gender.