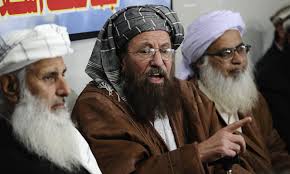 The manner in which the much touted talks between the government of Pakistan and the militant conglomerate Tehreek-e-Taliban Pakistan (TTP) are developing is confusing to say the least. In the very first meeting with the negotiating committee, the TTP representatives had clarified that they do not recognise the constitution of Pakistan. The cleric of the Lal Masjid, Maulana Abdul Aziz, a member of the committee nominated by the TTP for the talks has already announced that he would stay away from the peace process till such time that government included imposition of Sharia in the agenda.

Very clearly on the back foot, the government is now bending backwards to prove that all is well so far as the talks are concerned. On February, 12, the ruling party’s parliamentary leader in the Senate, Mushahidullah Khan said that TTP engaging with the government in dialogue clearly means that they recognise the country and the constitution. Not everybody harbours his confidence. This psychological game was taken a step further by the four member negotiating committee appointed by the government by leaking out to the press that the Taliban has “almost” agreed to the framework laid down for the talks. The “almost” says it all!!

The Taliban, on its part, is maintaining a stony silence! An ominous signal of things to come is the grenade attack in a cinema hall in Peshawar that left nine people dead; even though no militant group has owned responsibility, the signal is quite clear that the Taliban is not averse to maintaining pressure on the government even while sitting across the negotiating table. Imran Kahn had predicted something of this nature in an interview in New York, “The most likely result is that the negotiations will start, there will be about three or four big explosions and terrorist attacks and the negotiations will be called off.” A few of these “three or four terrorist attacks” have already taken place.

Under the circumstances, the scepticism that many harbour about the future of the talks is not unfounded. There are many reasons for the same and not least among these is the lack of commitment of the government to go ahead with the process. Not too long ago the government was getting ready to launch an all out offensive against the TTP; suddenly it took a U-turn and opted for talks. Now also it is saying that it will adopt a military approach should the talks fail; by so saying it is giving an indication that it expects the talks to fail. Would it be wrong to suggest that the entire exercise is being done for the benefit of some international power centres like the US? It is surprising that the government of Pakistan actually feels that it can get away with a deception of this nature.

A point about the participants in this dialogue; is it that the destiny of Pakistan will now be decided by a few fundamentalist clerics who probably have not gone through basic secondary school education? If this be the case then what future can the academics, the intelligentsia, the university graduates and post-graduates, the engineers, doctors, scientists and others of their class expect from their nation? If peace does come by after vesting power in the clerics then what would be the status of liberal democracy in Pakistan? What would happen to the aspirations of the youth of the country? How many Malala Yousafzai’s will suffer in the hands of religious bigots and for how long?

Much is being said and written about the role played by the US drone attacks in the creation of the Islamic militant organisations that form part of the TTP. Putting the blame of Pakistan’s ills on US initiated drone attacks amounts to politicising the situation. Is there any guarantee that if the drone attacks were to stop peace and tranquillity would come by in the whole of Pakistan? It cannot be denied that the Taliban is looking for a change in the political dispensation from democracy to an Islamic state and this has nothing to do with the drone attacks. It is this basic issue that the government of Pakistan should be addressing rather than the peripherals that it is involved in.

Apart from the majority Sunni Muslim population, Pakistan is also home to Shias, Christians, Hindus and Ahmedis amongst others. Even though this segment of population is dwindling due to reprehensible persecution it cannot be wished away altogether. In accordance with the vision of the founding fathers, the constitution of Pakistan envisages a secular, democratic state. Democracy has seen many upheavals in Pakistan but even during the various phases of dictatorship it was never very far from the political landscape. If the government of Pakistan seeks to protect its minority community it automatically loses leverage to open negotiation with the Taliban for a system of governance that is not secular and liberal.

The government’s faltering, indefinite and confusing approach to the issue of Islamic militancy has severely jeopardised its response to terrorism and sectarian violence in the country. It is time for the government to get down to the business of getting its law and order machinery in place. It should not hesitate from military intervention should the need be felt; there is no point in maintaining a huge military force merely for a perceived danger from India when the country is breaking from within. War with India is a distant possibility – Taliban is very real and right there. Beyond this, the government also needs to put its intellectual assets on board for chalking out the future course of action; everything cannot be left in the hands of uneducated religious and political leaders. Most importantly the popular aspiration of the people, especially the youth needs to be given due credence. Vacillation and clutching at straws is not going to get the government of Pakistan anywhere.