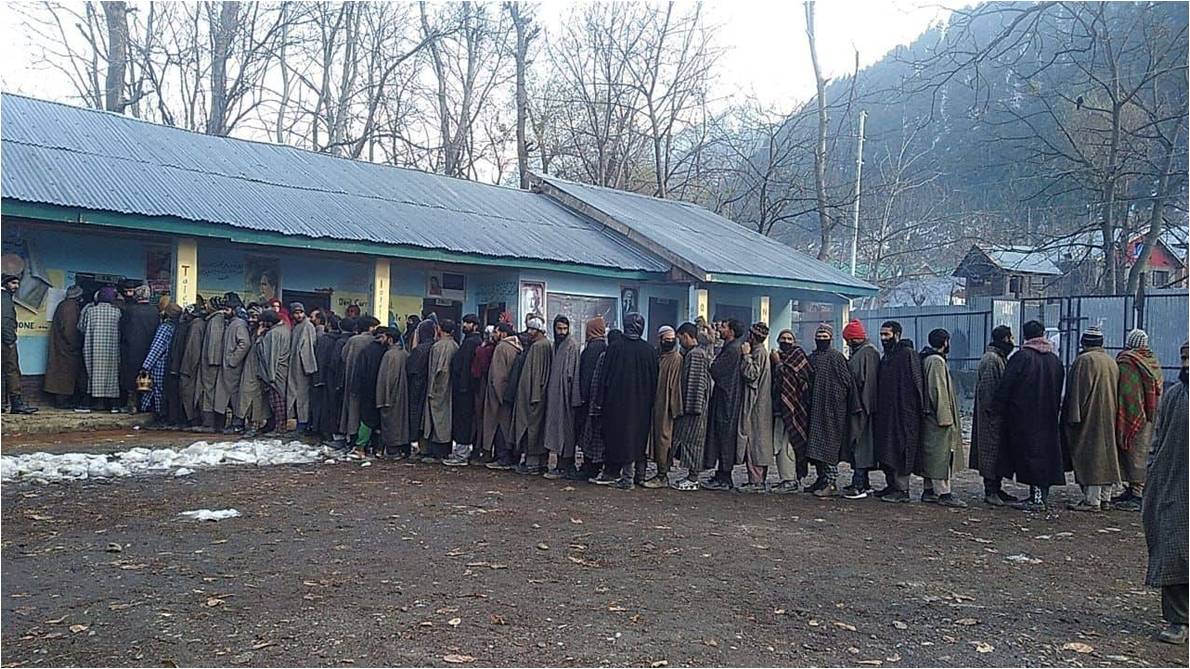 “I am happy that except for one or two very small incidents, District Development Council (DDC) elections were conducted in a very peaceful, free and fair manner. Despite cold weather, Jammu and Kashmir Police and Armed Forces contributed in a big way during these elections,” said Manoj Sinha, Lieutenant Governor of the Union Territory (UT) of Jammu and Kashmir, while heralding the culmination of the very challenging polls for the DDCs in the Union Territory.

The elections were held in eight phases, commencing on November, 28 and culminating on December, 19, with counting done on December, 22. Alongside were held by-polls to Panchayats and Urban Local Bodies to elect 12,153 Sarpanches and Panches. This is also the first time that residents like the west Pakistan refugees got voting rights for the polls due to abrogation of Articles 370 and 35 A.

As the counting date approached local parties of Kashmir like the NC and the PDP got into disinformation mode by asserting that the government would manipulate the results. However, with elected candidates belonging to all parties it soon became amply clear that such misinformation was based on outright speculation and political motivation.

The Bharatiya Janata Party (BJP) with 75 seats is standing tall as the party with the highest number of seats won, with three in Kashmir. It is a great achievement for the party. “BJP’s maiden victories in DDC elections in Kashmir speak of two stories–one of a conquest by the BJP, marking the beginning of a new era and the other of conveying a strong message to the Gupkar Gang that the end of their communal and divisive politics is near,” said BJP’s J&K General Secretary, Vibodh Gupta.

The People’s Alliance for Gupkar Declaration (PAGD) has garnered 110 seats. The Kashmir based politicians wish to project the PAGD count as their victory; political pundits, however, well realise their diminishing political clout that, in the first case, compelled them to go in for an unholy alliance to survive the polls. Other parties and particularly independents too did well.

The poll results imply that the BJP will dominate in at least six DDCs. The PAGD will have a majority in about nine DDCs, all in the Valley. As there is no clear-cut majority in five councils, the independent candidates are likely to play the big role there. Many from the younger generation came forward as candidates to contest the elections, this encouraging trend is likely to throw up a new, young and motivated leadership that the UT needs urgently.

The local parties of the UT, that have a presence only in the Kashmir Valley, did their very best to scuttle the polls. Initially they said that they would not contest till abrogation of Article 370 is not set aside, then they  quoted security concerns and possibility of poll manipulation as reasons for staying away. Such postures give rise to a feeling that some political forces in the UT are resisting transfer of power to the grassroots.

It is to the credit of Lieutenant Governor Manoj Sinha and his team that they remained steadfast in their decision to conduct the polls despite opposition. The local parties soon realised that not participating will lead to their complete marginalisation, yet, they were not sure of a respectable result in their favour. It was under these circumstances that they evolved the People’s Alliance for Gupkar Declaration (PAGD) to fight the polls together. Never before has there been such an example of political enemies throwing their ideology to the wind and coming together only for political manipulation. They may have won 110 seats but have also been exposed as blatant opportunists. It is only hoped that their inherent contradictions do not come in the way of successful functioning of the DDCs. If this happens, it will be an ultimate deceit to the people who have faced personal danger and inconvenience in extreme cold conditions to come out and vote for them.

Another significant aspect of the polls that the Lieutenant Governor mentioned specially in his post-poll statement is the conduct of the elections in a safe and secure environment. The terrorist and divisive forces, as expected, put in all efforts to derail the election process. Prospective candidates were threatened to desist from contesting or face violent reprisal. The terrorist cadre, though critically depleted, spiked up its activities. All of this is, however, did not accrue the desired result! The security forces, led by the Indian Army, kept a close watch on terrorist activity and evolved a fool proof security plan that was highly successful. The meticulous security arrangements, in turn, motivated the people to come out and vote in large numbers.

The historic significance of the local Bodies elections cannot be overemphasised. It has also been brought out by the lieutenant Governor in his statement, “I want to say that the three-tier democracy should work in a big way in Jammu and Kashmir. When the District Development Board gets formed then the development of the district will be the responsibility of the elected representatives.” The DDCs will oversee the functioning of Panchayats and will replace the District Planning and Development Boards. The chairman will be from within the elected representatives and not a bureaucrat as before. They will prepare and approve district plans and capital expenditures and ensure that the projects are implemented in a timely and efficient manner. Once this system starts functioning, the Panchayati Raj Institutions will finally become deeply embedded in the grass roots functioning of the UT.

Elections in a vibrant democracy empower the people by bestowing upon them the right to elect their representatives which, in turn, ensures accountability and transparency in governance. The new set up will be a game changer in the political landscape of Jammu and Kashmir. It will usher a new era of peace and development through the highest democratic practices. It will also set the pace for elections to the Legislative Assembly of the UT as have been promised by the centre.

(Onkareshwar Pandey is a senior journalist and political commentator)