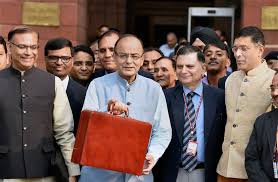 Finance Minister Arun Jaitley presented the Union Budget 2017-18 on Wednesday, February, 01. As usual, television and online media keenly followed the presentation with experts at hand to give their comments. Newspapers the next day devoted most of their space to analysis of various facets of the budget.

There are a few good reasons for this very obvious lack of interest. First, in a clear instance of blissful ignorance compounded by lack of interest, the budgetary allocation at more than two lakh crore seems to leave everybody quite satisfied that the security of the country has been catered for.  Second, there are not many in India who can speak knowledgeably on the subject of defense budgeting. Third, the overwhelming interest of the public lies in the personal benefit being accrued from the budget and the TRP hungry media concentrates only on what the viewers want.

The defence allocation in the last three budgets and now the fourth one has been Rs. 2.29; 2.46; 2.49 and 2.74 lakh crore respectively. The figures, by themselves, speak of the lack of vision and imagination that has gone into reaching to a sum total of the fiscal defense requirements of the country.

The net result of this cut-paste exercise is that defence expenditure (minus pensions) as a percentage of GDP has steadily declined over the last many years. Today it stands at 1.65 percent of the GDP which is far less than the percentage figure in 1962 when India got a drubbing in the hands of the Chinese.

The indication is that as the nation is getting richer its need for defense and security is reducing. The intent of our political leadership probably is to follow the age old tradition of buying off the enemy rather than fighting against him!

It would be appropriate here to see what experts on defence allocations and budgets, however few, had to say about the dispensation.

“Despite a glaring inventory deficiency for the three armed forces, India’s higher national security management has not allocated the necessary funds required. Or worse, has not utilised the amount budgeted in an effective manner,” said C Uday Bhaskar

“And if you look at the modernisation expenditure, which is part of the capital expenditure, it has actually declined, although marginally. This is the trend which we see over the last several years….,” said Laxman Behera.

“Such an insignificant amount for defence in the Union Budget will not serve the purpose as India needs more force multipliers and force degraders keeping in mind the possibility of collusive threat of China and Pakistan at any point of time,” said Major Gen. PK Sehgal.

The statements are self explanatory! Experts are not confident of the capacity of the budget top meet contemporary challenges in both day to day functioning (revenue expenditure) and force modernisation (capital expenditure) of the Armed Forces.

Now it is up to the government to prove the apprehensions wrong by achieving all of its stated goals in upgrading the defense structure of the country. There are certain defense related criticalities that the country would like to see being met by the government in the forthcoming year.

All war wastage reserves should be brought up to the minimum acceptable level of forty days, if not more. In this no complex negotiations are involved, the Ordnance Factory Board (OFB) and affiliated organisations have to be revved up to meet the target – it is as simple as that.

All payments due for the Seventh Pay Commission award (notwithstanding the service grievances against them) should be met in a timely and streamlined manner.

If the aforementioned targets are met through the revenue expenditure, it will become evident that necessary budgetary allocations were adequate and the apprehensions of the experts are misplaced. If they are not met the inverse will hold true.

Next is the capability to meet the modernisation targets within the capital expenditure allocation. One would expect that after making the mandatory payments for ongoing purchases there will be enough left to cater for the initial expenditure on the vast inventory that is waiting to be purchased. The critical hollowness existing in all three services has to be addressed. Fighter aircraft, naval ships, tanks, artillery guns, helicopters etc. all are in short supply and need to be purchased immediately.

To achieve this objective, the mandarins of the Ministry of Defence have to immediately stop the practice of sitting on files. It is embarrassing to see the Revised Estimates (RE) of the capital expenditure falling short of the Budget Estimates (BE) year after year. In other words, the Ministry of Defence is consistently unable to fully utilise even the meagre amounts that are allotted to it for purchase of military hardware.

Even today the gestation period for a military hardware purchase is minimum two years. Apparently, the situation has not changed in the last few decades despite many modifications in the Defense Procurement Procedure (DPP) manual.

Maybe the time has come to throw the DPP in the dustbin and come up with a new process altogether which helps leverage modern day thinking based on computers, internet, instant communication, video conferencing, simulator testing and the works.

Defence is too serious a subject to play around with. It cannot be given a brushing, emotional reference in some obscure political speech and then set aside. A nation or a government would do something like this at its own peril. It is hoped that the gravity of the situation will be understood at the appropriate levels.

(Jaibans Singh is a defense expert and editor www.defenceinfo.com)