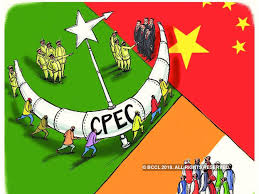 China is staring at big time trouble so far as its much vaunted China Pakistan Economic Corridor (CPEC) is concerned! Its ambitious Belt Road Initiative (BRI) project was to be spearheaded by the success of CPEC. Now the cost of CPEC has escalated from 40 billion USD to 60 Billion USD even as its security has emerged as a major challenge.

The main reason behind this resistance is the inherent greed of the Punjabi Muslim elite of the country. The leaders and the army generals, mostly from Punjab, are simply not willing to share with the locals, the benefits that could possibly accrue from CPEC. They are failing to acknowledge that these resource rich regions are strategically imperative for the success of the project and need to be kept in the loop.

Decades of colonisation of these regions by the Punjabi Muslim dominated Government of Pakistan and the Pakistan Army has led to a conviction that the CPEC spoils can be diverted to Punjab with impunity. The locals have not been made a party to any of the Memorandums of Understanding signed with the Chinese. The Chinese, in turn, have not used the local human resource for the construction activity; they have brought the labour force from their own country.

The locals are now apprehensive that even their small businesses will get eaten up by the large scale economic activity that will be managed by outsiders including the Chinese. For them the developments pose an existential crisis.

The locals have decided not to take the situation lying down and protests are being witnessed all along the CPEC route. These palpable simmers of discontent have the potential of escalating into an explosive situation. The Pakistani political leadership is quite content in letting the army deal with the situation and the army is resorting to the time tested method of applying brute force to quell protests.

The Pakistan Army is, of course, bending backwards to prove to the Chinese masters that it is s well capable of providing the desired security to the project. It has deployed its military manpower for this purpose and now the Ministry of Interior is poised to establish a Special Security Division (SSD) only for protecting the corridor. The SSD is slated to have as a strength equivalent to nine Army battalions and six civilian wings with more than 13000 personnel.

While dealing with the security situation the Pakistan Army is required to face not only the local challenge but also militant organisations like the Lashkar-e-Jhangvi and the Tehreek-e-Taliban Pakistan that it has raised and nurtured over time. They want a piece of the cake and are quite capable of wresting the same with use of force.

This poses a Catch 22 situation for the Pakistan Army. The choice is between maintaining war lords as irregular military assets or eradicating them to facilitate the CPEC. The second option will definitely not be a cake walk.

China has realised that a loosely threaded security policy is not going to work out in the longer run and the aspect cannot be left in the hands of the Pakistan army in totality. It is, therefore, is attempting to open communication with locals, especially so in Balochistan, where there is much larger danger of violence and sabotage.  With time, China will also need to look into Khyber Pakhtunkhwa, hence, the rising importance of Imran Khan in the political spectrum of Pakistan.

China is also aware that India can create hurdles in the project by bringing up the issue of it passing through the territories of Gilgit-Baltistan, which are disputed between India and Pakistan.

China is, therefore, eager to keep India’s attention diverted while the integration of Gilgit-Baltistan in the project is underway. For this reason it has given a tacit nod to the proliferation of terror from Pakistan Occupied Kashmir into India.

Pakistan is escalating the terror threshold because it has complete diplomatic and military backing of China. An obvious manifestation of this backing is the manner in which China has been vetoing an India sponsored bid in the United Nations to list Maulana Masood Azar, the chief of the notorious terrorist organization, Jaish-e-Mohammad (JeM) as an international terrorist. It is notable that in the recent past all terrorist initiated violence in Jammu and Kashmir has been the handiwork of the JeM.

It is quite apparent that China is biting more than it can chew. Short term military measures may restrict the people who are being exploited but in the long run only that which is righteous will prevail. The region can look forward to a long period of strife and violence that will, in all probability, negate the economic potential of the project altogether.

CPEC may fall under the weight of its own contradictions but India, as an aggrieved party due to the perfidious use of the disputed territories of Gilgit-Baltistan for blatant colonisation, needs to put in place a coherent policy of challenging the initiative. She would be well within her rights to leverage the manifold and complex challenges that the CPEC faces. India also needs to join forces with likeminded countries like the US in coming up with alternate projects that are less dangerous and more lucrative.

Building a credible military force to meet the enhanced threat is a single moot point that India needs to dwell upon. Diplomatic and bilateral efforts have to revolve around a position of strength. The need to boost defense capability has never before been as critical for India as it is today.

(Mehtab is a US based engineer and analyst)