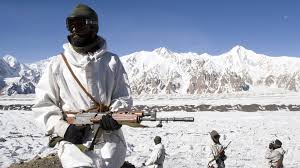 Operation Meghdoot, the very name carries with it an aura of respect and admiration within military circles across the world. What was militarily accomplished in this operation, launched by the Indian Army in the icy heights of the Siachen Glacier on 13 April 1984, has no parallels in the annals of military history.

In an unimaginable feat of grit and bravery the Indian army gained control over the dominating heights on the main passes of the Saltoro ridge, Sia La and Bilafond La.

The start point of this saga came by when Colonel Narendra Kumar, a reputed mountaineer and Commandant, of the Indian Armys’s High Altitude Warfare School (HAWS) came across a map in 1977, which showed a dotted line joining NJ 9842 to the Karakoram pass, thus depicting that the India-Pakistan boundary line ended at NJ 9842.

With great energy he launched a couple of expeditions from 1977 onwards and unearthed the Pakistani plan to control the territory. Pakistan had already taken the first few steps by opening the area to mountaineering expeditions by civilians and was inching towards gaining military control. It was at this stage that the Indian Army launched Operation Meghdoot and succeeded in physically occupying its territories.

Pakistan denounced the Indian action as a violation of the Shimla agreement which barred the use of force to bring about a change in the line of control.

It is said that, after Pakistan lost the Quaid post, Benazir Bhutto taunted General Zia-ul-Haq that the Pakistan army should wear bangles.

Indian Army posts in Siachen were subject to incessant Artillery firing by Pakistan for many years. Earlier the Indian Army was reticent in its riposte but later it adopted a Tit for Tat strategy that had a devastating effect on the Pakistani positions on the lower ridges.  Firing is controlled since the ceasefire agreed upon in 2003.

Pakistan has been consistently pressurising India to demilitarise the Glacier since it is in a very weak position over there. International pressure is also being brought to bear in the Indian leadership. The argument is based predominantly on ecological degradation in the sensitive region due to human presence.

Successive governments in India have not been averse to the idea of demilitarisation but have laid down a few pre-conditions.  The most prominent among these is authentication on a map of the Actual Ground Position Line (AGPL) along which troops are presently deployed. Pakistan is insisting on a withdrawal to the positions held in 1984, which is clearly not acceptable to India.

Pakistan wants India to vacate to the 1984 position so as to validate occupation of the Saltoro range by the Indian forces as a violation of the Shimla Agreement. Having achieved the first step, Pakistan will declare the region as a disputed territory. After this, a Jihadi intrusion to fructify expansionist designs is definitely not beyond the realms of reality, regardless of the assurances given.

Control over the area would constitute a major strategic achievement for Pakistan as it would breathe down the Indian Army’s positions in Ladakh while denying India the capability to monitor the sensitive Pakistan-China axis.

The matter has taken an even more critical turn for India now that Pakistan has illegally ceding to China the whole of Gilgit-Baltistan and especially the Shaksgam Valley.

While China’s main interest in Gilgit-Baltistan emanates from its much vaunted China Pakistan Economic corridor (CPEC) project, control over Siachen will bring about an added advantage of bridging the crucial Aksai Chin-Gilgit-Baltistan gap and onward domination of the Karakoram pass.

India cannot allow such a strategic disaster to take place. Thus, holding of the Siachen Glacier becomes even more important.

Not much forward movement has been witnessed on the demilitarisation issue since the NDA Government headed by Prime Minister Narendra Modi has come to power. This is because there has been, for long now, a breakdown in communication between the two countries  due to Pakistan’s constant support to terrorist activities directed against India. The Indian government has also adopted a posture of linking Siachen with the larger framework of relations between the two countries. Talks on Siachen will remain a part of the larger issue to include Pakistan’s support to terrorism in India.

It is admitted that India has lost more soldiers to the hostile weather in Siachen than to operations. Better procedures and precautionary process, however, have reduced the casualties to a great extent. Now advanced technology, including Unmanned Aerial Vehicles and different types of radars, is being used to make the life of soldiers posted over there a little easier.

Adverse climatic conditions or any other form of hardship will not deter Pakistan from covetously eying Siachen. Now even China would be equally interested to dislodge the Indian deployment over there. Such inimical designs make it imperative for India to steadfastly man the heights notwithstanding the cost and the difficulty.

Despite the facilities that are being extended to troops deployed in the extremely inhospitable area survival continues to be difficult and a great challenge. The Indian army, as is its wont, has not shown any signs of being fatigued by the challenge, there are enough volunteers for a tenure in Saichen.

April, 13, which is celebrated as Siachen Day by the Indian army, has witnessed a renewed resolve by the great Indian soldiers to uphold the sovereignty and integrity of the nation. Pakistan and China need to remain forewarned that any thought of a misadventure over there will lead to a bloody nose and embarrassment for them.

(Dr. Simrit Kahlon is an academician with keen interest in Geo-politics)