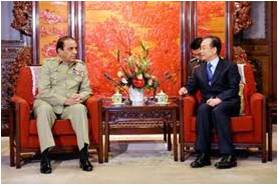 Pakistan had been on a roller coaster ride since the day Hussain Haqqani, then Pakistani ambassador to the US, was accused of initiating an unsigned note to the Americans seeking help to avert a possible military coup. The note, allegedly initiated at the behest of President Asif Ali Zardari, continues to cloud the future of democracy in Pakistan. It led to the dismissal of the Defence Secretary, Lieutenant General (Retired) NK Lodhi, essentially an army nominee and close to the Army Chief General Kayani. This added fuel to the already confrontationist relationship between the Pakistani government and the military which, soon enough, reached a nadir. Against this backdrop, talk of the military takeover started doing the rounds both in and out of Pakistan.

This can easily be termed as the worst political crisis that the already shaky four year old Gilani government has faced. The twist of events has been such that now Gilani is himself on the dock due to the Supreme Court strictures on his inability to prosecute his own President. On the sidelines of the World Economic Forum (WEF) at Davos in Switzerland, Prime Minister Gilani proudly informed reporters there was “no chance” of a military coup in Pakistan ever, “I don’t think there will be a coup in Pakistan ever. There is no threat to democracy”, Gilani said. There are, however, a number of stakeholders and players in the field whose posture on the issue will decide the political future of Pakistan.

Western diplomats have dismissed claims of a possible coup on the premise that the army, which is already engaged in targeting the Taliban strongholds in areas along the Afghan border, is deeply reluctant to seize control of the country. A knowledgeable Western ambassador based in Islamabad justified this contention by saying that the military does not enjoy enough support from the public, the media or the opposition to engineer a coup since all stakeholders favour democracy.

Yet another important player is the judiciary of the Nation. Undoubtedly, a possible military takeover will face legal hurdles, with Iftikhar Muhammed Chaudhry as the Chief Justice. One can foresee any attempt at installing a military government being struck down by the Supreme Court. He is on record stating that there will be no validation of military takeover by the Court. Kayani’s predecessor, Pervez Musharraf, had witnessed the huge mass movement that Chaudhry’s removal had led to. In fact, his final demise was primarily brought about on account of his mishandling of the Chaudhry case. However, Chaudhry is also at loggerheads with the government over several issues, the most contentious of them being the charges against President Zardari.

The most important player, of course, remains the military and its contentious head, General Ashfaq Pervez Kayani. Kayani, with little or no support at home has exercised his best option of garnering support abroad. He has responded with an urgent visit to China where he had a 75-minute long meeting with the Chinese Premier Wen Jiabao, something not commonly seen in International diplomacy. Wen Jiabao went on to acknowledge the role of the Pakistan Army in strengthening the strategic relationship between their two nations and by so doing strengthened the hands of the General enough to take him off the course of staging a coup.

Another important factor is the man on the street who is quite skeptical of the ability of the army to lead the nation. The common man feels that the Army has been unable to contain, let alone combat the spread of terror groups. The raid on the Naval base in Karachi and repeated attacks on military establishments and check points are pointers as to who is winning the war in Pakistan. The arrests of a few uniformed personnel also lays bare the extent of Jihadi penetration of the armed forces and ISI’s inability to move out of its mould.

The current tussle over the `memogate scandal’ is against Zardari, who is the elected head of state and supreme commander of the armed forces. The army has no grievance against Gilani, who is the elected head of government. The two other services, the Air Force and the Navy are quite wary of such misplaced adventurism and could never bring themselves to agree to an uncalled for intervention of a clique. Even within the army there is more than one opinion with a perceptible bias towards non interference in governance by the service.

With the Chinese unlikely to support a coup, Americans preferring to remain on the sidelines, the army’s low repute on the streets, Kayani is unlikely to stage a coup, as of now. Of course, should Gilani try to consolidate by pushing the army further, it may be the only course of action left for him. However, even in that case, Kayani would be wise enough to form a civilian government, and that too only till an election can be held.

Continuation of a strong democracy in Pakistan is undeniably the best option for India. The problem with military regimes is that if India signs peace deals with them, one cannot be sure whether they will be given legitimacy by political parties. This is precisely what happened with regard to Musharraf’s formula on the Kashmir conflict. India-Pakistan back channel negotiations during this period had finalised a mutually acceptable solution for Kashmir, but the political government was unwilling, and even today does not wish to abide by it. Significantly, during the present crisis, there has been no attempt from the Pakistani side to engage in diversionary war tactics against India. Under these circumstances the fact that not a single comment has been heard from the Indian side looks to be a step in the right direction.